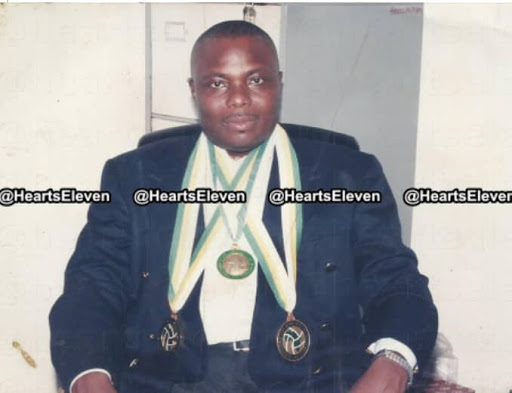 Where do I even begin? This man gave 40 years of his life to football; 29 years to Hearts. And in those three decades at Hearts, the Phobians won 12 league titles, five FA Cups, the continental hat-trick of trophies: Champions League, Confederation Cup, and CAF Super Cup, and not counting the myriad minor trophies swept along the way.

Yet, today, it’s not the results that I am eager to talk about. It’s the causes and behind-the-scenes work done by the administrator extraordinaire, Ashford Tettey-Oku, that ushered in this trophy laden period of success for the Phobians.

Mr. Tettey-Oku worked in the background in all those years. He had joined the club as a young man in the early 80s, rising to the position of Administrative Manager at the turn of the 90s - a position he held for 21 years - before finally accepting the General Manager position after the floatation of Hearts shares in 2011.

Strangely, for a man who had achieved so much and oversaw so many successes, Ashford was a quiet, humble, and affable man who made his works do the talking. He never sought attention nor made himself the cynosure in anything at Hearts. Yet, behind the scenes, he’s the brain holding the team together when it came to the day-to-day administrative operation of the club. After two seasons of near-misses in the CAF Champions League, and with the club in search of some fortune with the draw, Ashford brought Hearts the luck they deserved as he traveled to Egypt and came back with the pairing that would lead the Phobians to their finest moment on the continent in the year 2000.

Ashford was well respected within the club and even outside it. He’s a man of principle and an adept diplomat, who used persuasion not force, sense not noise, and respect not superciliousness to wow both friends and foes in the corridors of Ghana and African football. It comes as little wonder that wherever he has worked and whatever he’s touched, success automatically follows.

Thanks to him, Hearts avoided so many legal pitfalls but even when they did falter, Ashford was there to make sense and provide interpretations of the reason Hearts had taken such a course. In fact, not many people know this or have ever given him the real credit, but though he had long left the club, had it not been for a single gesture from Ashford, Hearts would have gone on to be relegated in 2015. At the risk of being accused of Hearts bias, he pointed out a peccadillo to the club that could have cost Hearts six points. Fortunately, the clubs that could have benefited from the lapse failed to detect it and file the protest.

In one of his most famous aphorisms, quoting an advice he’s given by the revered Ato Ahwoi, Ashford always says, “Never allow the heart to help destroy what the hand has built.” And it’s this simple yet powerful nugget that saved Hearts in 2015. And it’s so certain that if he had not sounded the warning, the Phobians would have gone on to repeat the same mistake.

Ashford, without a shred of doubt, is one of the finest administrators and interpreters of the rules of football in Ghana. He has gone through the ranks at the Premier League Board, rising up the ladder to become Vice Chair and ultimately Chairman in 12 years. Aside that, he is a qualified CAF Instructor in Administration and has served so many roles in Ghana football from Player Status Committee, Club Licensing Board, Match Review Panel, Executive Council member of GHALCA, and a whole lot that I cannot even keep count.

And it’s no surprise that he continues to give his service not just to Hearts but all the other clubs in the country, including Kotoko, who in recent times have benefitted most from Ashford’s services.

A loyal son of the Oak tree, a man of principle and virtues, Ashford Tetteh-Oku, on this day, @HeartsEleven celebrates you and thank you for the immense services you rendered to our darling club, Accra Hearts of Oak.

And in case you are wondering what’s hanging on Mr. Tettey-Oku’s neck, those are the medals no Ghanaian or West African club can produce except Hearts of Oak: The treble holy grail of African football.

Take a bow, to a behemoth of Ghana football administration.

NO CLUB ADMINISTRATOR IN THE ENTIRE HISTORY OF GHANA/GOLD COAST CAN BOAST OF ASHFORD TETTEY-OKU’s achievement.