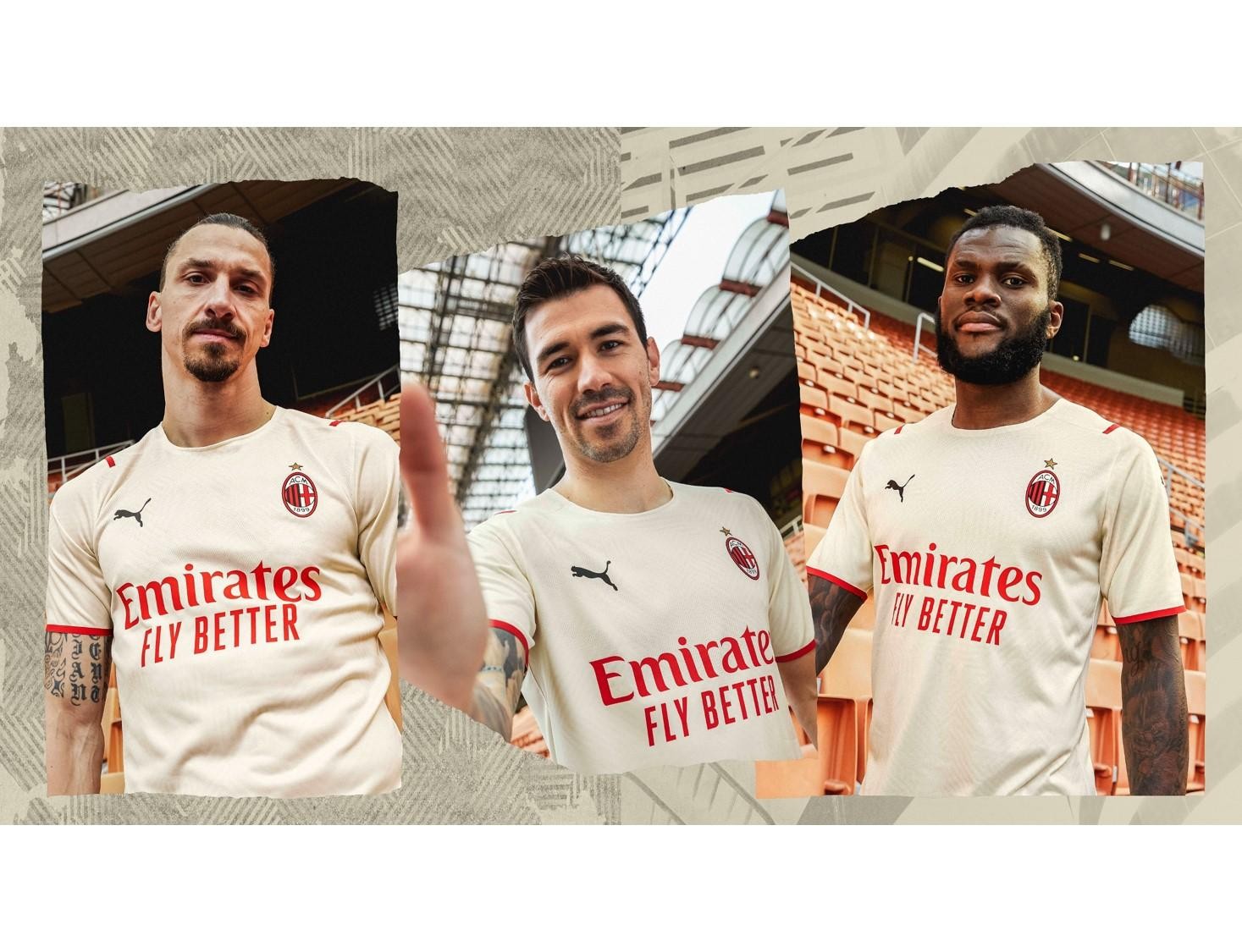 Global sports company PUMA has today unveiled the new AC Milan Away kit to be worn by the Men's, Women's and youth teams throughout the 2021/22 football season. The special new golden kit celebrates the work of Fondazione Milan, AC Milan's charity, with the words "Fondazione Milan" printed under the collar on the back of the shirt. The new Away jersey also features a striking all-over pattern inspired by six cities across the world involved in a charitable initiative that will officially launch in September.

The "From Milan to the World" initiative, created by AC Milan's Fondazione Milan, in partnership with PUMA, will give Rossoneri fans across the world the chance to vote to support a socio-educational project out of six proposals that will be presented in September, alongside local and international non-profit organizations. The end result will be the development of the selected program, linked to one of the six cities chosen for the initiative: New York (USA), Rio de Janeiro (Brazil), Kolkata (India), Melbourne (Australia), Nairobi (Kenya) and Milan (Italy).

Fondazione Milan was set up in 2003 with the aim to spark positive change in the community. The foundation continues to grow as more fans, partners and club legends join the cause, helping to expand the reach of the various initiatives implemented across the world.

Casper Stylsvig, AC Milan Chief Revenue Officer said, "We are proud to be launching this Away kit with our partner PUMA and celebrate the work of our Fondazione Milan, which does an incredible job helping people in need at a local and international level. The jersey itself looks very elegant with its golden color and geometric pattern, but most importantly it will help us bring some change into the world through the “From Milan to the World" initiative, which will launch in the near future. This is something we are particularly proud to be able to do as a Club, because it fits perfectly within our social responsibility journey, which remains a very important aspect of our work at AC Milan, both on and off the pitch."

The new kit represents Milan’s impact from Milan to Italy to the World. AC Milan brings people together from different cultures, languages and ages as the club continues to expand its impact across the globe. Milan's unbreakable bond with the team and the city sends an inclusive message to over 500 million Rossoneri fans worldwide, uniting people from the walls of the San Siro to the streets of Rio and beyond.

"AC Milan connects so many people across the world through football and charitable projects, so we wanted to pay tribute to this with the design of the shirt. The idea behind the bespoke graphic integrated into the jersey was to give each city connected to the Fondazione its own identity," said Nick Willems, Graphic Designer Teamsport Apparel. "We placed distinct graphics created for each city inside outlines of those cities. We then added those graphics into a repeat pattern to connect all of the cities, symbolizing the strength of AC Milan and of the Fondazione."

The new AC Milan Away jersey combines 100% recycled polyester with advanced PUMA dryCELL thermoregulation technology to ensure uncompromising fit and mobility, keeping the athlete dry and comfortable. The jersey integrates an Ultra-light jacquard structure into the back of the jersey to enhance breathability during intense performance.

The new AC Milan Away kit will be available from July 21st at PUMA.com, PUMA stores, AC Milan official stores, store.milan.com and at select retailers worldwide.