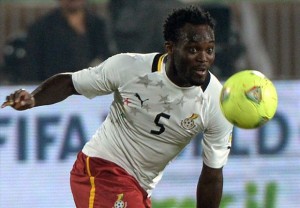 Ghana midfielder Michael Essien says he wants to continue to play for the Black Stars after the 2014 World Cup insisting he wants to play at the 2018 tournament.

The former Chelsea star is praying against injuries to help him continue to play for his country Â and help them at the tournament to be played in Russia in 2018.

Essien is among Ghana's players heading for the 2014 World Cup and it was suspected that he could retire from the Black Stars after the tournament in Brazil.

Serious injuries he has suffered in his career look to have robbed him of his power which has sparked talk that he could retire from Black Stars duties after Brazil.

But the AC Milan player, who missed last yearâ€™s World Cup through injury, hopes to continue for as long as he can at international level and possibly feature in the next Mundial.

â€œIf I suffer no further big injuries, continue to play well and continue to be selected for the Black Stars, then who knows ... I may be at another World Cup,â€ he said.

â€œAfter [Brazil] it will be business as usual - back to playing club football and if selected for the national team, I will carry on.

â€œThere are African Cup qualifiers and the 2015 tournament in January, so that will be the next objective.â€

Ghana face a tough task in Brazil, having been drawn in Group G alongside Germany, Portugal and the USA.

Do you think Essien should continue playing for the Black Stars? Are you happy with Essien's decision? Please make your views known in the box below: