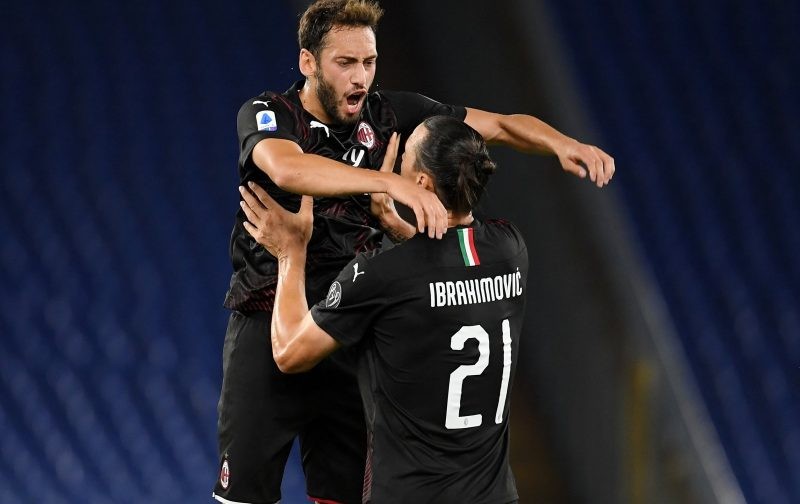 Lazio’s hopes of landing a first Serie A title in 20 years took a major blow on Saturday as AC Milan ended the capital club’s unbeaten home record with a thumping 3-0 victory at the Stadio Olimpico.

A Hakan Calhanoglu strike and Zlatan Ibrahimovic penalty gave the visitors a comfortable lead at the break, before substitute Ante Rebic added a third to complete the rout and ensure that the Rossoneri became the first team to beat the Aquile in the capital in the league since Atalanta in May 2019.

The result leaves Lazio seven points adrift of Serie A leaders Juventus with eight rounds remaining, while Milan have leapfrogged Napoli into sixth and sit just two points behind fifth-placed Roma ahead of the Giallorossi’s clash with the Vesuviani on Sunday. Lazio were missing strikers Ciro Immobile and Felipe Caicedo through suspension, and Simone Inzaghi brought in the returning Lucas Leiva and Joaquin Correa in their place, with Luis Alberto pushing forward to support the Argentinian in attack.

Ibrahimovic lead the line for Milan for the first time since Serie A’s return after recovering from injury, and he was one of five changes for Stefano Pioli as Andrea Conti, Simon Kjaer, Giacomo Bonaventura and Alexis Saelemaekers also started.

Milan went in front after 23 minutes when Calhanoglu’s deflected strike from the edge of the area looped over Lazio goalkeeper Thomas Strakosha. A neat finish from Ibrahimovic was ruled out for offside, but the Swede didn’t need to wait long to make his mark, as a Stefan Radu handball gave him the chance to score from the penalty spot, although Strakosha was unlucky as he got a glove to the ball before it squeezed under his body.

The hosts started brightly in the second half and thought they had pulled one back through a cool Manuel Lazzari finish following a rapid counter-attack, but the wing-back was offside after Alberto delayed his pass a fraction too long.

Rebic, who replaced Ibrahimovic at the interval, put the result beyond doubt on the hour-mark after latching onto a clever Bonaventura pass and finishing in composed fashion for his ninth league goal of the campaign. Theo Hernandez had a shot well saved by Strakosha after one of his characteristic bombing runs, before astonishingly firing wide with only the goalkeeper to beat from close range as the game entered the final 10 minutes.