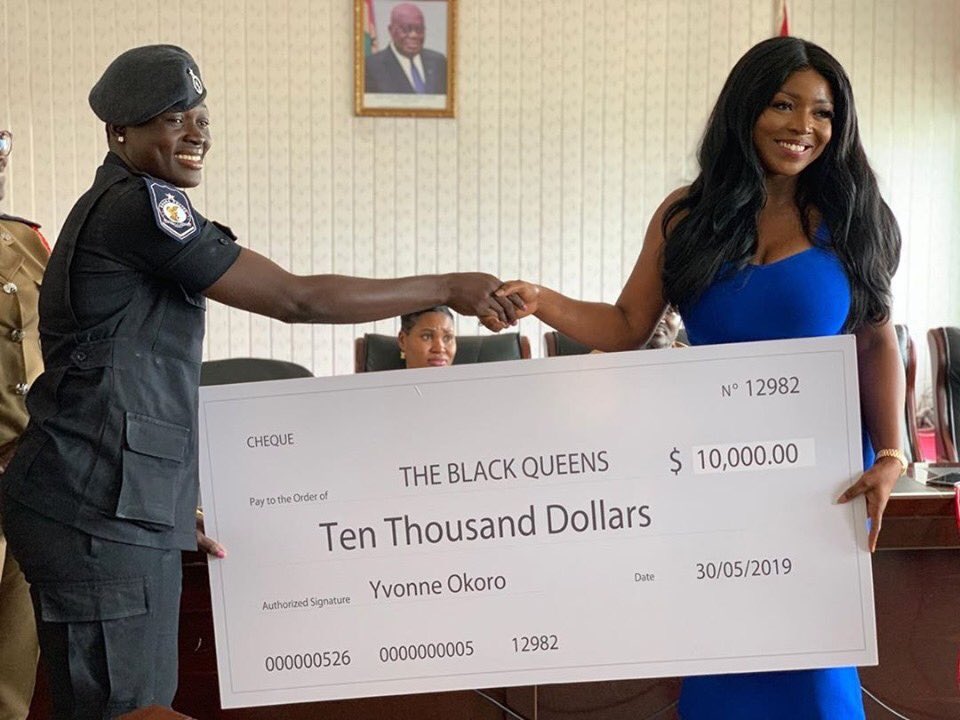 The Deputy Minister for Youth and Sports Hon Perry Curtis Kwabla Okudzeto has commended actress Yvonne Okoro for fulfilling her promise to reward the Senior Women’s Soccer team, the Black Queens with an amount of $10,000 for winning bronze medal at the just ended WAFU Zone B tournament in Ivory Coast.

It was the hope of the Deputy Minister that the gesture will not only inspire the team to achieve more in future tournaments but also influence corporate institutions to come on board and support Government efforts in the development of women football.

Hon Okudzeto made this call when the actress presented a cheque of $10,000 to the team after the latter presented the bronze medals they won at the WAFU Zone B tournament.

Ms. Yvonne Okoro had earlier promised the Black Queens an amount $10, 000 token should the team get to the semi final stage of the WAFU tournament.

The Deputy Minister congratulated the team for the bronze winning feat and tasked the team to build on the performance for future tournaments.

Having been impressed by the performance exhibited by the team at the tournament, the Deputy Minister announced that “a package for the team” will soon be announced by the Ministry for the team for bringing home a medal.

On behalf of the playing Body, Captain Of the team, Dumehasi Fafali expressed the team’s gratitude to the ministry and Actress Yvonne Okoro for the support before and during the tournament.

Present at the short ceremony were the Chief Director of the Ministry, Mr. Frank Quist, a member of the Normalization Committee, Mrs. Naa Odofoley, Head Coach Mercy Tagoe-Quarcoo and other members of the technical team.