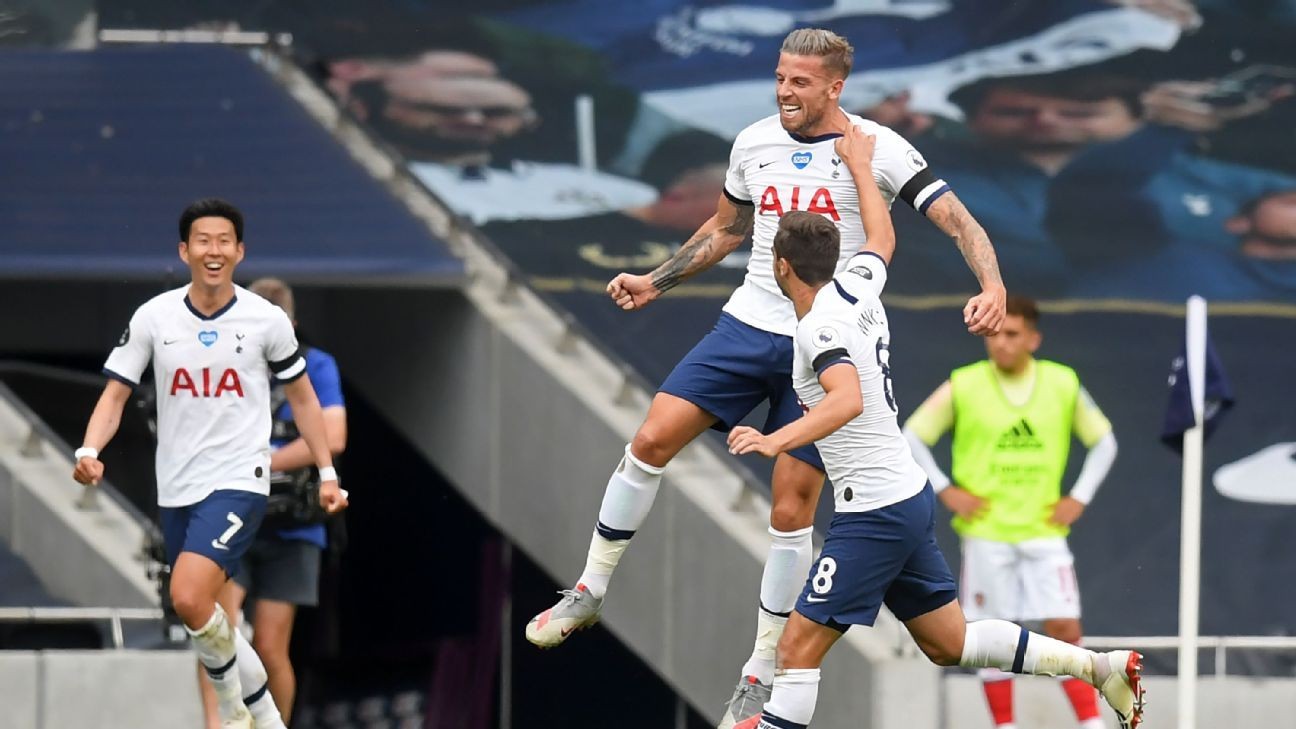 Tottenham came back from a goal down to win 2-1 in a tight and very entertaining North London Derby, thanks to a late Toby Alderweireld header.

It was Arsenal that got off to a flyer, with Alexandre Lacazette unleashing an unstoppable shot that arrowed past an outstretched Hugo Lloris. The home side got a slice of good fortune just minutes later, as a mix-up in the Arsenal defence allowed Son Heung-min to race through on goal, and delicately chip the ball over Emiliano Martinez to level the score.

Both sides had good chances to win the game, with Ben Davies and Pierre-Emerick Aubameyang each rattling the crossbar. With just nine minutes of play left, it was Toby Alderweireld who stole all three points for Spurs, heading home from Son's brilliantly-taken corner kick. The result takes Jose Mourinho's side to within two points of seventh place Sheffield United, and keeps hopes of European football next season alive.

Going forward, the home side were certainly more threatening this afternoon in comparison to previous weeks. Harry Kane's movement troubled the Arsenal backline, while Giovani Lo Celso's creatively from midfield also gave Mikel Arteta much to think about. Some fans may not have been too pleased seeing the home side defending so deep, but on the plus side, they did look very compact when Arsenal pushed for an equaliser late on.

Mourinho not happy with Spurs doc on AmazonMourinho: I will win trophies at Spurs before I go

In the midfield battle, Spurs were opened up all too easily in transition. Arsenal consistently got into dangerous positions after by-passing the likes of Harry Winks and Lo Celso, who at times looked isolated with Moussa Sissoko playing out wide. The side's performance dip in the first 20 minutes of the second half will also be of concern, as Arsenal began to dominate possession for a sustained spell.

8 -- His team was set up to create more chances after the snooze fest at Bournemouth. The tweak worked, as Lo Celso played Kane and Lucas Moura in on a number of occasions. Defensively the side was opened up at times, but Mourinho's decision to play Sissoko as a right-sided midfielder did provide some much-needed cover for Serge Aurier.

GK Hugo Lloris, 6 -- Could do very little about Lacazette's wondergoal, which looked venomous -- even in slow motion. Otherwise, a solid display from the goalkeeper.

DF Serge Aurier, 5 -- His loose touch and subsequent sloppy challenge led to Lacazette's opener. Thereafter, he looked more solid with Sissoko playing just ahead of him -- but it was yet another performance marred by a mistake.

DF Davinson Sanchez, 7 -- The slightly weaker of Spurs' two centre-backs, with the former Ajax man often slow to close down Arsenal's attackers. He improved in the second half, however.

DF Toby Alderweireld, 8 -- The Belgian was positionally excellent throughout. His late header from a superb Son corner rounded off an excellent afternoon.

DF Ben Davies 6 -- Rattled the crossbar with an outrageous long-distance strike in the first half. Defensively he was disciplined, though up against Nicolas Pepe, the 27-year-old was beaten easily for pace on a handful of occasions.

MF Harry Winks, 6 -- The Englishman was a passenger at times, failing to stamp his authority on the game in any meaningful way. Picked up a yellow card in the second half.

MF Moussa Sissoko, 7 -- Worked hard on the right side of the midfield, helping Aurier out defensively, while also drifting centrally to provide additional support. A good, selfless shift from the Frenchman.

MF Giovani Lo Celso, 7 -- Spurs' most creative midfielder, though his silly yellow card early on threatened to undermine his good work. He linked up particularly well with Kane, whom he almost put clean through on goal.

Toby Alderweireld popped up with a late header to give Tottenham bragging rights in the North London derby and keep Tottenham's European dreams alive. MICHAEL REGAN/POOL/AFP via Getty Images

MF Lucas Moura, 8 -- Playing on the left side of a midfield four, providing both creativity and hard work whilst tracking back. His early through ball to Kane, which almost saw the England striker lob Martinez, was a notable highlight.

FW Son Heung-min, 8 -- The South Korean showed great desire for his goal, after capitalising on a mistake from Sead Kolasinac and David Luiz, to then neatly lift the ball over the Arsenal keeper. He also provided an inch-perfect corner for Spurs' late winner.

FW Harry Kane, 7 -- His movement and fitness looked to have returned this afternoon, but the normally prolific striker saw his best opportunities saved by Martinez in the second half. Didn't stop working for his side until the final whistle.

MF Oliver Skipp, N/R -- Worked hard off the ball after coming on for Lo Celso.

MF Erik Lamela, N/R -- Held onto possession well as Spurs grinded out the win in the closing seconds.