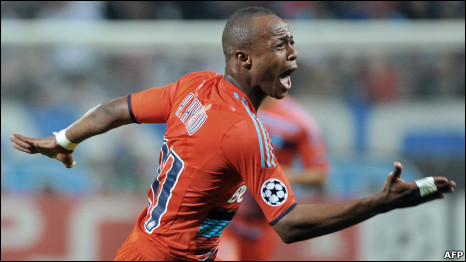 Ghana midfielder Andre Ayew has been named the 2011 BBC African Footballer of the Year.

The 21-year-old who plays for French club Olympique Marseille saw off competition from Cameroonian Samuel Etoâ€™O, Seydou Keita of Mali and the Ivorian duo of Yaya Toure and Gervinho to succeed compatriot Asamoah Gyan who won the award last year.

Ayew who turns 22 tomorrow in the season under review played an integral role in Marseilleâ€™s French League and Super Cup feat.

This was achieved on the back of an impressive Nations and World Cup performances with the Black Stars in 2010 which saw Ghana go all the way to the grand finale and the quarter finals only to lose to Egypt and Uruguay respectively.

The second son of legendary Abedi Pele however had it rough at the beginning of his international career two years earlier.

He was vehemently criticized for his below par performance when Ghana hosted but did not meet the target of winning the African Cup in 2008.

The bashing hardly affected his progress as after loan spells with Lorient and Arles Avignon proved a stepping stone to what was to become a highly fruitful time with Marseille.

Already, there are talks of a possible move to join other European giants which will certainly not come cheap.

He is also expected to play a lead role for Ghana in their pursuit to end a 30-year wait for an African title when the competition starts on January 21 in Gabon and Equatorial Guinea.