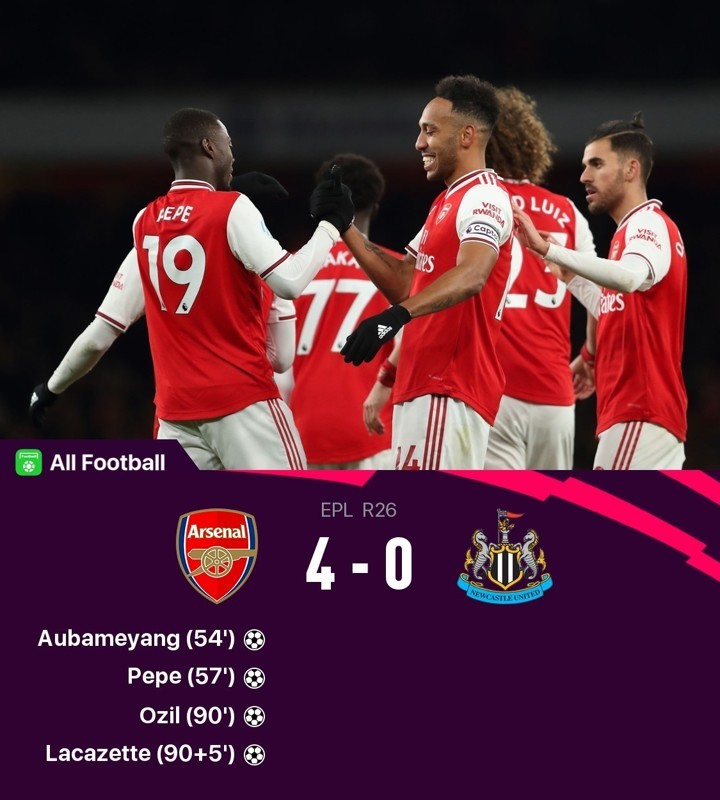 Game is over and the final score is Arsenal 4-0 Newcastle. Here is the match report.

What a chance for Nketiah! Pepe shimmies into the box after a long spell of Arsenal pressure and wriggles his way towards the byline, before cutting back a perfect cross for Nketiah, who slams a powerful shot off the top of the bar from close range! If that was on target Dubravka would have stood no chance!

ARSENAL TAKE THE LEAD! 1-0! Well, they started this half with much more intensity and now they've found the breakthrough! The hosts quickly switched the play out towards Pepe, who cut inside and swung in a deep cross that found the head of Aubameyang, who powered an effort beyond Dubravka and into the far corner from close range!

ARSENAL MAKE IT TWO IN QUICK SUCCESSION! 2-0! Saka teases Lazaro, before nutmegging the wing-back and advancing into the box, where he kept his composure and slid a low pass for Pepe to lash into the bottom corner from six yards!

Huge chance for Clark! Newcastle should have one back as Saint-Maximin beats Bellerin again before carefully picking out Clark in the box, who takes a touch before slicing a shot comfortably wide from just eight yards!

Aubameyang hits the bar! Well, I'm not sure if he meant it, but Aubameyang almost nets Arsenal's third! Pepe once again drives at Rose, before finding Aubameyang in the box, who's initially forced out wide, until he attempts a dinked cross that flicks off the top of the bar and away for a goal kick.

Saint-Maximin strikes the post! Newcastle's hopes are fading with just over 10 minutes to go, but not through the fault of Saint-Maximin. This time the attacker scurries away on the counter-attack again, before whipping a low shot from 20 yards that hits the inside of the post and ricochets away to safety.

ARSENAL GET A THIRD! 3-0! Newcastle go chasing the game and swiftly get punished as Pepe picks out Lacazette in the six-yard box, who slices a shot straight into the path of Ozil who sweeps a composed finish beyond the helpless Dubravka from close range!

LACAZETTE FIRES IN A FOURTH! 4-0! Arsenal sweep across the pitch in a beautiful move that culminates with Pepe breaking away into the box before cutting back to an unmarked Lacazette, who rifles an unstoppable finish into the top corner from 12 yards!