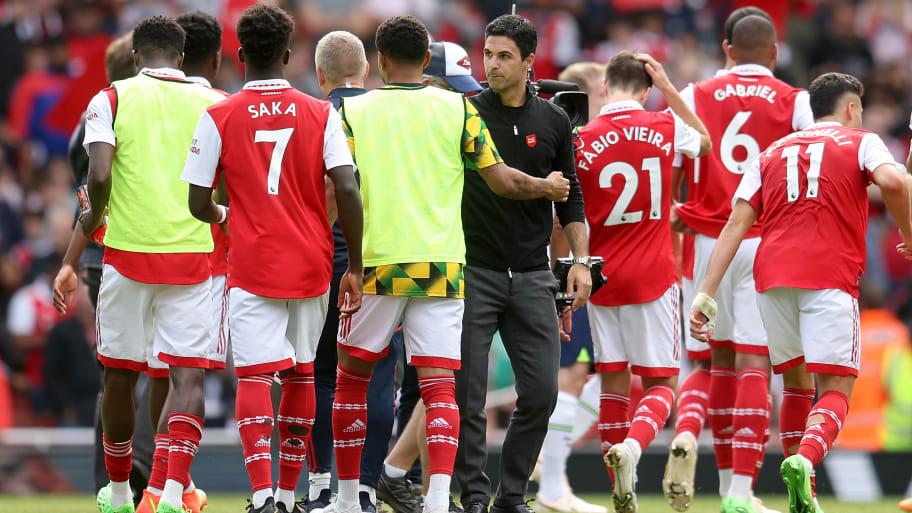 There aren't many tactical battles in which Antonio Conte comes out second best, but Saturday's north London derby was one of those rare moments.

Instead, it was Mikel Arteta who had his hands held high at full-time, echoing Arsenal's standing at the top of the Premier League table.

The Spaniard has faced plenty of criticism for a perceived lack of tactical awareness in his past and doubters will have been licking their lips at the idea of seeing him humbled by Conte, but those sceptics have retreated into the woodwork after Arteta masterminded a stunning 3-1 victory over Tottenham.

His inverted wing-backs - Oleksandr Zinchenko for the most part and Kieran Tierney later on - worked to perfection in attack as they simply outnumbered Spurs' midfield. Zinchenko wasn't even particularly good, perhaps due to his recent injury, but his presence alone was the catalyst for everything.

The extra body meant Granit Xhaka could continue his remontada as a one-man wrecking crew, while Thomas Partey shone on his own return from injury and was clearly delighted to have a little more help inside.

The trio laughed their way around Pierre-Emile Hojbjerg and the admittedly solid Rodrigo Bentancur, getting through at the Spurs back line time and time and time again.

That was an impressive call from Arteta, but it was his response to a play from Conte which deserves most praise.

Clearly aware of the threat of Bukayo Saka, Conte doubled up on the Englishman and had Ivan Perisic and Clement Lenglet neutralise him well in the first half. Unsurprisingly, Arsenal looked a little flustered without one of their star man.

Conte did a good job, but Arteta reacted by telling Ben White, over at right-back, to stop coming into midfield and instead fly round the outside on the overlap. Make it two-vs-two and give Saka the chance to run at one defender alone.

Literally within minutes of this move, White overlapped Saka and allowed the winger to get a shot off, and it ended up at the boot of Gabriel Jesus to prod Arsenal 2-1 up.

Spurs did try to respond but Emerson Royal's red card brought an end to that hope, allowing Arsenal to cruise to victory.

What was impressive about this victory was not only Arsenal's ability to win this game, but their manager's willingness to move away from his preferred setup in search of a season-defining victory. He wasn't scared to make a big call and deservedly got the rewards.

With dominant players and a tactically astute manager, Arsenal have sent a message to the rest of the league - they're coming for the title.

This article was originally published on 90min as Arsenal flex their title credentials by dismantling Antonio Conte's Tottenham.