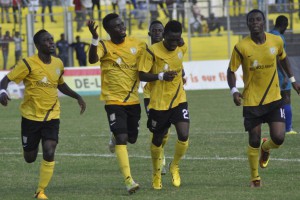 Chief Executive Officer (CEO) of AshantiGold SC, Kudjo Fianoo is optimistic of the Miners’ chances of securing qualification into the next stage of the CAF Champions League following his side’s slim win over Algerian side MO Bejaia.

The Ghanaian side needed Tijani Joshua’s 60th minute strike to secure a solitary win over Algerian side in a sizzling game last Sunday at the Obuasi Len Clay Sports Stadium.

But ahead of the second leg clash in Bejaia in two weeks time, the CEO of the “Aboakese Lads” is hopeful of AshantiGold’s chances of qualifying despite his side’s slim victory.

“They came into the game and had a well rehearse strategy which worked for them. We created decent chances that should have given us more goals but in the end we had only one.”

“I’m not disappointed with the score line. I’m confident that we will shock them in Algeria in the return leg in two weeks’ time in order to book our ticket to the next stage of the competition.

I’m saying that because I know what my players can do so Bejaia should be wary of what we are bringing on board in the second leg,” Fianoo said after the game.