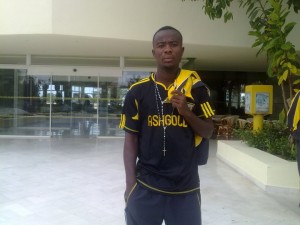 Midfielder Anobah accused Amoako of attempting to inflate his contract renewal sum at AshantiGold some months and were aired by the radio station.

The management of Shaft FM was served last week and Anobah, now with Ghana Premier League side Medeama SC, has received his summons from the High court in Tarkwa yesterday.

A confidant of Amoako told GHANAsoccernet.com" He (Amoako) feels very sad about the situation and believes it's a purported attempt to tarnish his hard won reputation and therefore wants the law to take its course."

"George is out of the country now with the Black Meteors in Maputo but has hired Lawyer James Marshall Belieb to take charge of the case before he comes back and he's asking for GHC 100,000 as compensation from the two parties," he added.