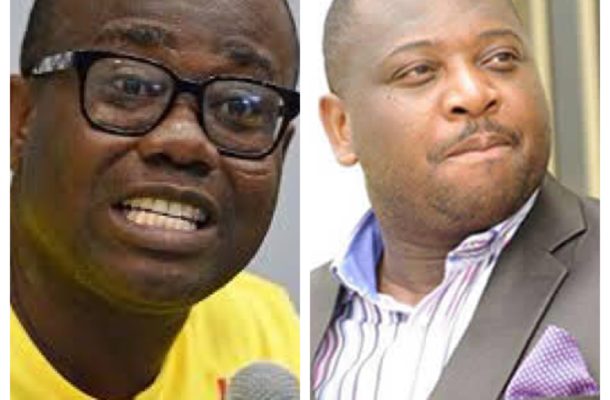 The outspoken Member of Parliament for Assin Central claims the bankroller of Heart of Lions is the master brain behind the recent predicament of the embattled former FIFA Council member.

He told Kumasi-based Fox FM on Monday that Nyankayi's former protégé is the chief architect of the exposé which revealed widespread corruption in the game in the powerful West African nation.

The hugely publicized exposé has brought football on its knees in the country amid a government interference which could lead to a potential FIFA ban.

The country ruling New Patriotic Party appears to be pandering to the whims and caprices of several 'loud' Ghanaians who have been unhappy with the perceived high rate of corruption exposed in the melodrama.

The video captured five leading members of the FA including its president Kwesi Nyantakyi engaged in alleged infractions of their code of ethics.

Several referees were also caught in the cross-fire taking several sums of monies to influence matches - it claimed in the documentary.

But hard-hitting legislator Kennedy Agyapong says claims that the documentary piece was a joint collaboration between Tiger Eye PI and world service BBC is completely false.

He has pointed accusing fingers at Randy Abbey, claiming the former Ghana FA spokesperson is the chief financier of the explosive project targeted at dislodging the embattled former FA capo.

"Randy Abbey set up Kwesi Nyantakyi. Randy has said he will disgrace Akufo Addo so that Mahama will get another chance to become president," he fumed on Kumasi-based Fox FM

"And today they are on a chase to make me unpopular and claim I don't deserve to be an MP.

"I am aware of  all their diabolical schemes.

Abbey was one of Nyantakyi's trusted lieutenancy until he lost an election to be on the Executive Committee and struggled to get onto the Emergency Committee.

Listen to the audio interview on Fox FM