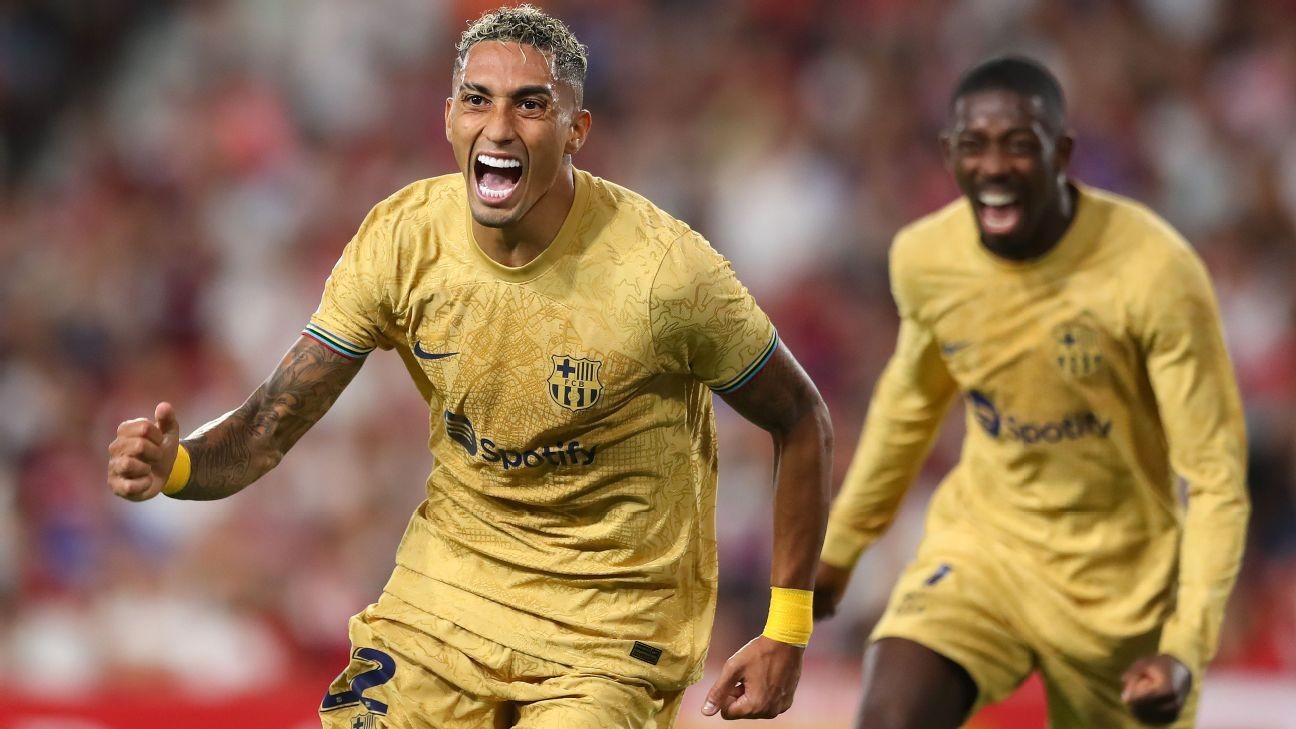 Goals from Robert Lewandowski, Raphinha and Eric Garcia were more than enough for Barcelona to wrap up a comfortable 3-0 win at struggling Sevilla on Saturday.

The victory vaults Barcelona into second place, behind LaLiga defending champions Real Madrid, after four rounds of matches. Meanwhile Sevilla's latest bad result -- their third defeat in four games to open the 2022-23 campaign -- leaves them one place above the bottom three.

Barcelona didn't start the game with the control that coach Xavi Hernandez craves, but their front three were so efficient they got away with it as they kept on Real Madrid's tails at the top of LaLiga.

Led by Lewandowski once again, Barca recovered from a slow start at the Sanchez Pizjuan to blow Sevilla away inside the opening 35 minutes. The first goal came on the counter-attack, with Ousmane Dembele feeding Lewandowski, whose chipped finish was scrambled off the line only for Raphinha to head home the rebound from close range.

Lewandowski made it two before the break, controlling and finishing brilliantly after being picked out by Jules Kounde, who was returning to his former club after a €55 million summer move. Lewandowski now has five goals in his last three games and while Polish striker wasn't involved in the third, the lively Raphinha was. The Brazilian's deep cross was headed back across goal by Kounde, who claimed his second assist of the night when Eric Garcia turned home what was his first-ever goal in professional football.

Raphinha and Barcelona overwhelmed a slumping Sevilla side on Saturday en route to a comfortable win. Fran Santiago/Getty Images

With Real Madrid making it four wins from four against Real Betis earlier on Saturday, Barca, two points back, will need their front three -- and their replacements, Ansu Fati and Ferran Torres here -- to keep firing if they want to keep up with Carlo Ancelotti's side.

2. Ter Stegen shows he's far from done as Barca's No.1

Given the final score line, it may seem amiss to highlight Marc-Andre ter Stegen's performance, but the German goalkeeper's start to the season deserves to be singled out. A persistent knee injury has hampered his form over the last two years and led to criticism of his performances and even suggestions that he could be usurped by his understudy, Inaki Pena, at some point this season.

But Ter Stegen has dispelled those doubts with a fine start to the campaign. He had already made important stops against Rayo Vallecano and Real Sociedad this season and once again helped Barca lay the foundations to win in Seville. Isco and Youssef En-Nesyri were both denied by fine saves in the first half from Ter Stegen, who made some slightly more routine stops after the break. Including his four saves here, he's made 12 stops this season, conceding just one goal from an xGa of 3.11.

Sevilla look in real trouble and it may get worse before it gets better with Erling Haaland and Manchester City due to visit in the Champions League next week.

After a bright start, they proved far too weak in defence as Barca picked them off at ease. They have not recovered from the summer exits of centre-backs Diego Carlos and Kounde, who returned to haunt them in Barca colours. Sevilla have just one point from four games and Julen Lopetegui's job will soon come under scrutiny. He's clearly feeling the heat, too: he smashed his hand off his own dugout after seeing Lewandowski double Barca's lead, while whistles and jeers greeted him at the final whistle.

City on Tuesday is the last thing they need right now, especially with Haaland in the form he is in. The Norway striker scored four times against Sevilla last season as Borussia Dortmund knocked them out of the Champions League.

While Barca's attackers took the plaudits and did the damage, Gavi was quietly brilliant. The midfielder led Barca's press, snapped into challenges and never gave Sevilla's players a minute's peace.

It's a tough ask to come in and replace Carlos and Kounde, but even so Nianzou had a night to forget against Barca. The former Bayern Munich defender never got a handle on Lewandowski.

There was also a nice moment for Xavi at full-time, following another impressive victory. It's clear that something's building nicely in his squad...

After the match: What the managers, players said

"The balance is really positive. It was a difficult start for the first 15 minutes, but then we settled in the game. We began to circulate the ball better. We played in their half but we also created chances in transitions. It was a good performance. I think we dominated and could have scored more goals. The dynamic is good. To win 3-0 at a place like this, we are in a very good moment of form. -- Xavi, Barcelona manager

"We were superior to Barcelona at the start of the game. They created very little danger and I think we had three or four clear chances. But football is goals. We didn't score and the first time we lose the ball, they have shown the quality they have and logically that has done the damage.

"But I think the team did things well. We have to correct some defensive situations, of course, whether it's losing the ball or defending in the box. But it was a huge effort from the lads. I think in that regard the future will be positive." -- Julen Lopetegui, Sevilla manager

"I am not surprised by Gavi's performance because I see him train every day. I know what he's capable of. The way he plays, he is pure intensity, personality, hard work, heart, discipline (...) I don't want to be unfair on the others, but he was perhaps the best player tonight." -- Xavi, Barcelona manager, about Gavi

- Robert Lewandowski (BAR): Has five goals in four LaLiga matches this season. He is the only player other than Lionel Messi to score 5 in the first 4 LaLiga matches of a season for Barcelona this century

- Raphinha (BAR): Scored his second career header goal in European top flight leagues. The other came in 2017 while playing for Vitoria Guimaraes

- Eric García (BAR): Scored his first goal in 75 competitive club games in his career (all comps)

Sevilla: With just one point from their first four LaLiga games and a spot in the table just above the relegation zone, Sevilla need to find some form and quickly. But the fixture list isn't kind: after their Champions League matchday one visit from Manchester City (Sept. 6), they travel to Espanyol in LaLiga (Sept. 10) before a trip to FC Copenhagen (Sept. 14) for Champions League matchday two.

Barcelona: Xavi's side are just two points behind league leaders Real Madrid after four games, but they face a tricky spell of fixtures in the next week-and-a-half. After hosting Viktoria Plzen in Champions League matchday one (Sept. 7), they travel to Cadiz in LaLiga (Sept. 10) before a grueling trip to Bayern Munich (Sept. 13) in Champions League matchday two. All eyes will be on Lewandowski's return to Bavaria: can be be the winner for Barcelona?