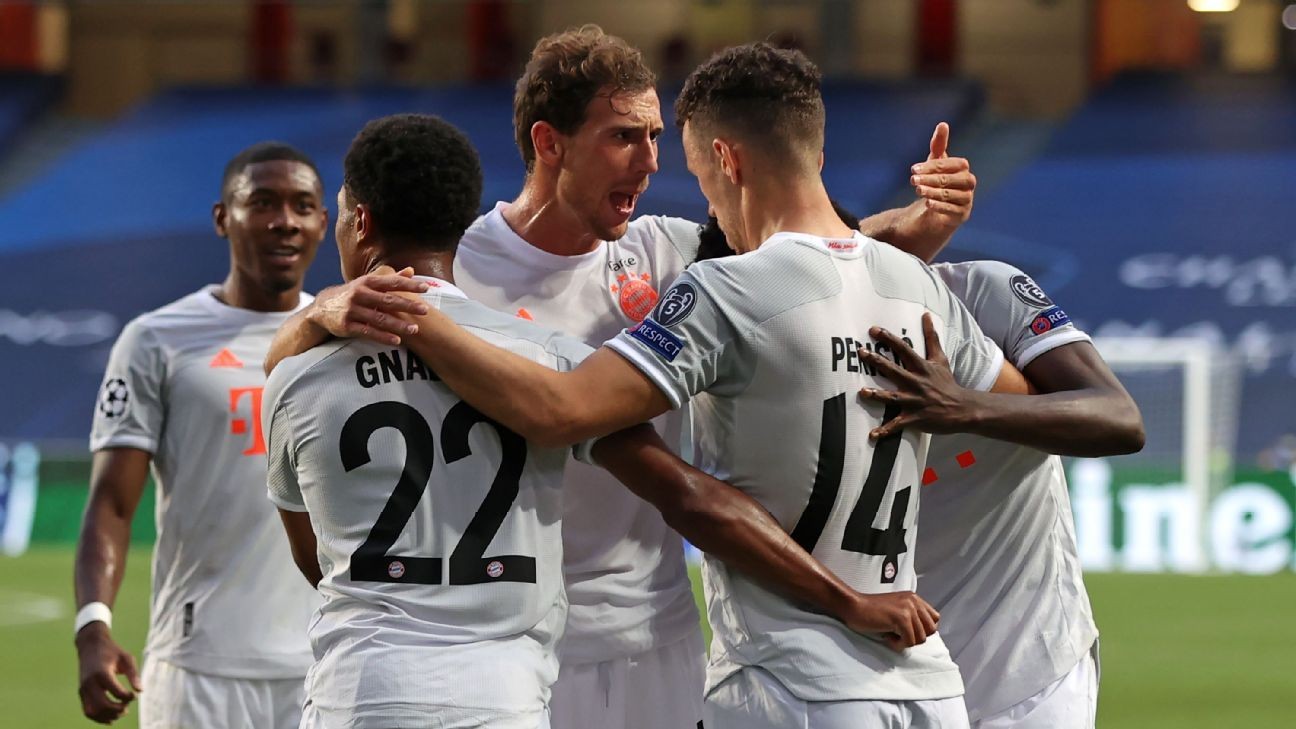 The stadium -- three-quarters empty, one-quarter filled with substitutes, coaches and media at the sort of population density you might find in Alaska -- must have made it worse. Angry boos and vicious abuse, anguished howls and despairing cries... however unpleasant, they tell you you're alive. They're the slap to the face or pinch of the cheek that generate pain and adrenaline to shake the numbness and activate whatever fight is left. The surreal near-emptiness of the Estadio da Luz must have sown some seed of doubt in the minds of Barcelona players as they went 4-1 down with just over half an hour gone against Bayern Munich in their Champions League quarterfinal... was this real?

The mind, inevitably, went back to the 2014 World Cup semifinal, the "Mineirazo" in Belo Horizonte, when hometown Brazil found themselves 5-0 down against Germany inside half an hour. Three of those Bayern players -- Jerome Boateng, Manuel Neuer and Thomas Muller -- were there on the bleakest night in Brazilian football history since 1950. Then, as last night, it was Mueller who opened the scoring.

Tyler Adams is RB Leipzig's unlikeliest of heroes to emerge from the shadow of Timo WernerAtalanta's magic season ended against PSG, but their story's far from overChampions League, Europa League fixtures schedule

But yeah, it was real. All too real.

"We've hit rock-bottom," said Gerard Pique. "We need to change -- not just players, not just managers. I'm not talking about individuals, I'm talking about structural change. If it will help the club, I'll leave too. Today was unacceptable. It was a disgrace."

The knee-jerk conclusion will no doubt be that this Barca team is as dependent on Lionel Messi as a yo-yo is reliant on gravity and that when he's subdued, Barca crumble. And that Quique Setien, like the man he replaced, Ernesto Valverde, will be ushered out stage right in 3, 2, 1. Not just him, either. Embattled Barcelona president Jose Maria Bartomeu was quick to say that Pique was correct and there were going to be massive changes. No, he wasn't going to resign, but according to local reports, sporting director Eric Abidal and chief executive Oscar Grau may want to find some cardboard boxes to help clear out their offices real soon.

The last time Barcelona conceded eight goals in an official match came against Sevilla in the Copa del Rey, except it wasn't called that because the king was in exile -- it was the Copa del Generalissimo Francisco Franco. The year was 1946, the U.S. flag had 48 stars, Winston Churchill had just coined the term "iron curtain" and Johan Cruyff hadn't been born. But it's churlish to focus on Barcelona's dysfunction after this Bayern performance. And besides, there will be plenty of time to mull over the many pathologies that ail the Camp Nou from bench to boardroom.

Nope, Friday was about Bayern and the twin qualities of humility and relentlessness, made flesh in the form of Muller. Asked before the match about the secret of Bayern's success -- they've scored 39 goals in nine Champions League matches this season -- he said it was because they were always humble in their approach, taking nothing for granted and going hard from beginning to end.

They play like a side that feels the need to prove itself every time they step on the pitch. And if that means channeling their inner Nick Sabans and running up the score, so be it.

Bayern Munich ran up the score on a Barcelona side in a ruthless display, proving how they're the best team in Europe right now. RAFAEL MARCHANTE/POOL/AFP via Getty Images

Muller's first goal epitomises this. Bayern win the ball back and Ivan Perisic barrels down the left flank. Muller breaks from deep, legs pumping, arm in the air. He's way behind the play, centerforward Robert Lewandowski is well ahead of him, ready to tuck in the cross, but Muller demands the ball. When it comes, he cushions it with his right for Lewandowski, he gives it straight back, for Muller to rifle past the keeper.

Watch it again and Muller looks gangly and uncoordinated. An oversized ugly duckling. But he knows exactly what he's doing, and it's lethally effective. He's the guy at the pickup game with the taped-up glasses, knee brace and the wonky, ugly jump shot who nevertheless always gets open and keeps draining threes. Ungainly, sure, but also wicked smart and willing to run through brick walls.

Muller was chosen as man of the match, but when he said it would be fair to share the award with his teammates, it wasn't just a trite, post-match comment. Bayern are a Team with a capital "T" and what's more, they've all bought into what their coach, Hansi Flick, is selling.

There was Serge Gnabry, a livewire, bursting north-south through Barca's back four. There was Alphonso Davies, the Canadian winger-turned-left-back, creating perhaps the signature highlight of the 2019-20 Champions League leaving Nelson Semedo on the spot to set up Joshua Kimmich's tap-in. (That goal -- a left-back setting up a right-back -- is supposed to be a near-physical impossibility in this sport... and nobody who moves that fast should be allowed to remain so calm and collected at full throttle.) There was Leon Goretzka, the man with the build of a bouncer and the touch of a firefly, setting up teammates with no-look passes.

But it's as much about the environment in which they operate. Bayern's last two goals came from substitute Philippe Coutinho, who is on loan from Barcelona, of all places, and has been a bust this season. He has no idea where he'll be for training camp next month but, as long as he's there, his focus is in lock-step with the club. The same applies to Ivan Perisic, on loan from Inter, who scored to make it 2-1.

Then there are two players whose contracts expire in 2021 and whose future at the club is uncertain amidst stalled contract negotiations: Thiago Alcantara and David Alaba. The former pulled the strings in midfield with his usual, unflappable metronomic precision. The latter was so single-minded that, in the second minute of injury time with Bayern up 8-2, he nearly blew a gasket arguing with the linesman over a throw-in. These guys do not stop and they are furiously, relentlessly on message.

That's the hallmark of a great club and a great manager who is capable of keeping the outside world far away once the players cross the chalk lines around the pitch. Flick, a long-time assistant and administrator with the German FA, had not been a head coach for nearly 15 years when he was appointed in November, initially on an interim basis. This was Bayern's 19th consecutive win in all competitions and they haven't lost since Dec. 7, 2019, back when most of the world thought Corona was something best drunk with lime and nothing else.

They're in the zone and it's a zone Flick created. And as of right now, it looks as if their single-minded march is heading straight to the Champions League crown.