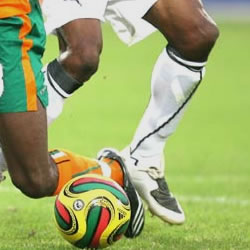 Bechem United picked their first point of the league season by drawing 1-1 with Aduana Stars in Kumasi on Saturday.Â

Midfielder Richard Addae put Bechem United ahead with a wonderful lob on 18 minutes before Godfred Saka levelled from the spot on the stroke of half time.

Former Ghana U20 star Peter Ofori-Quaye skied a penalty which could have helped Bechem United to their first maximum points of the season.

Bechem, who were without a point going into Saturdayâ€™s game, showed a lot of attacking promise in the opening 15 minutes of the game.

The persistent pressure however yielded results on 18th minutes when Eric Fordjour combined well with Maxwell Mensah to play through Richard Addae to made light work of two Aduana Stars defenders before gleefully lobbing the ball over the stranded StephenÂ Adams.

Bechem were presented with a plethora of opportunities to add to the tally but Godfred Ofosu and Ofori-Quaye, all failed to utilise the chance.

Aduana Stars, the 2009/10 champions, rarely came forward but the few times they did, they looked dangerous.

Referee Theresa Bremensu awarded a penalty kick on the 39th minute to Bechem United after Eric Fordjour was hacked down in the penalty area by an Aduana Stars defender.

Peter Ofori-Quaye elected himself to dispatch the kick but fired it into the heavens.

Midfielder Emmanuel Akuoko was on his way to levelling the score when James Papa YawÂ impeached him inside the box. Godfred Saka sent the GeorgeÂ ArthurÂ the wrong way.