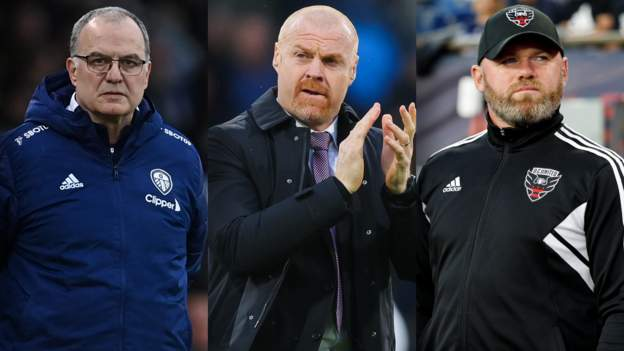 Everton are again in the market for a new manager.

After a run of eight Premier League games without a win Frank Lampard was sacked on Monday, leaving the Toffees looking for a seventh permanent manager since the start of the 2016 season.

But who next? Are the problems deeper than the manager? And what next for Lampard?

Lampard sacked as Everton managerThe impossible job? What next for Everton and Lampard?Visit our Everton page for all the latest Toffees news, analysis and fan viewsYou can now get Everton news notifications in the BBC Sport app - find out more

'He should have been getting more out of this squad'

When Lampard took over at Goodison Park on 31 January last year Everton were 16th in the Premier League, six points clear of the relegation zone.

They lost 10 of their remaining 18 games but secured safety with a 3-2 comeback win over Crystal Palace, and finished 16th.

Brazil forward Richarlison, who scored 10 league goals last season, was sold to Tottenham for £60m, but the club spent in excess of £80m on the likes of Belgium midfielder Amadou Onana from Lille for £33m and Dwight McNeil from Burnley for £20m.

They started the season with two defeats and then four draws, before a first win came against West Ham on 18 September. Just two followed in the next 13, with Lampard sacked following a 2-0 defeat at fellow strugglers West Ham on Saturday, meaning the Toffees had taken just two points from the last 24.

That left them 19th, above bottom-place Southampton on goal difference, and two points from safety.

Speaking on BBC Radio 5 Live's Monday Night Club former Blackburn striker Chris Sutton said: "They had to do something, didn't they? The club is so toxic. Something had to change.

"I do think he's unfortunate in many respects in what he took over. I thought he did brilliantly last season to keep them up, they haven't kicked on and there are mitigating circumstances, but the question is: should he have been getting more of this current squad? I think there is an argument to say he certainly should have been."

Speaking on Sky Sports, former Manchester United and England right-back Gary Neville said Everton's players "are a shambles" and some of the mistakes they made in the defeat at West Ham were "criminal".

Ex-Liverpool defender Jamie Carragher said the team had "become such an easy touch", adding: "That isn't just on Frank, that is on the players as well. That group of players aren't good enough, that is obvious, but they shouldn't be bottom of the league.

"I always associate Everton, as a child and when I played against them, as a tough place to go. They were uncompromising, aggressive, but they are the easiest touch in the Premier League now. If you're on a bad run you want to play Everton."

That is proven by clubs around Everton with West Ham's win their first in eight, while Southampton's only win in nine came at Goodison Park and Bournemouth's only win in 11 was at home to Everton.

'No overarching vision' and 'the worst run club in the country'

There have been widespread and vocal protests from fans against the board, and supporters staged a sit-in demonstration after the Southampton defeat.

Everton's board of directors missed that game because of what the club claimed was a "real and credible threat to their safety".

Merseyside Police said no threats or incidents had been reported to officers prior to the fixture before Everton announced "enhanced security procedures" would be put in place.

Everton owner Farhad Moshiri attended his first game in 14 months at West Ham and he suggested, when questioned by Sky Sports at the game, that it was not down to him decide on Lampard's future. That led to questions and confusion about who was making decisions and the structure in place at the club.

Rory Smith, chief soccer correspondent from the New York Times, speaking on BBC Radio 5 Live, said: "There doesn't appear to be any consistent thoughts, no overarching vision, there's no plan.

"His [Moshiri's] appointments are slightly, not odd, but they don't add up. He gives them power but then he's got a director of football. The recruitment is a mess. If you look at the money they've spent, and it has been plenty since Moshiri took over, they've made some good signings but they've made plenty that just don't make sense."

Former Chelsea player Pat Nevin agreed that Moshiri's managerial appointments are an issue, saying: "If you start looking a little bit further back, since 2016, at the managers they've had in, who has really been a success? You could maybe say Carlo Ancelotti, but there is something darker in there and it isn't working at Everton at a deeper level."

Dominic King, northern football correspondent for the Daily Mail, said Everton's approach to managers, which has seen nobody last two seasons in the past seven years, as "a crackpot way of doing things", while Sutton added: "Everton are making it up as they go along."

Neville agreed, saying he struggled to understand why a club went from Sam Allardyce to Carlo Ancelotti to Rafael Benitez, highlighting the different playing styles of each.

"They are absolutely all over the place when it comes to the identity of the football club," said Neville. "They have no identity. They have moved from one spectrum to the other, they have no consistency."

Carragher said Everton had contacted him after he called them "the worst run club in the country" six to 12 months ago, but he said "I didn't think I was wrong then and I don't think I'm wrong now".

'He would have to be a genius' - who might take over?

Former Leeds United boss Marcelo Bielsa is on the shortlist to replace Lampard with Moshiri known to be a fan of the 67-year-old. However it is unknown if the Argentine would take on a job mid-season.

Sean Dyche, who has been out of work since being sacked by Burnley last April, is likely to be discussed.

Ex-Southampton boss Ralph Hasenhuttl was discussed by the Everton board when Lampard was appointed, and is available after being sacked by the Saints in November.

They all feature in the top five with the bookmakers, alongside former Everton players Wayne Rooney, who is on charge of MLS club DC United, and Duncan Ferguson, who has had two brief spells as caretaker manager.

King told BBC Radio 5 Live: "Bielsa is the favourite. I would say he would be a genius if he can get them playing football the way he likes to play football."

Former Everton captain Alan Stubbs told BBC Radio 5 Live he thinks Rooney would fancy the job and "he is certainly one name that could unite the friction and animosity between the board and fans".

Ex-Toffees forward Kevin Campbell said he thought Dyche's style of football "would suit Everton and the fans", adding that the "next appointment is going to be really important".

'He might need to go abroad' - what next for Lampard?

Lampard had a win ratio of 23.68% at Everton, taking three points in just nine of his 38 Premier League games in charge.

It sees the former England midfielder sacked from a second Premier League position after lasting 18 months at former club Chelsea, where he had a win rate of 52.4%.

Sutton said it is "really difficult" to see Lampard "walking into another Premier League job".

"He might have to cut his teeth abroad or at a Championship club where he thinks he's got a chance of taking them up," added Sutton. "He is a determined individual and he'll want to achieve. This will have done him some damage."

Nevin agreed, saying: "He would have done absolutely everything he possibly could. He's had two of the biggest jobs in the Premier League - he's not going to get a big one next time.