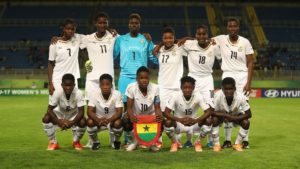 The national female U-17 team, the Black Maidens are expected to embark on a tour of the United States as part of preparations for the FIFA U-17 World Cup

The Black Maidens qualified for the FIFA U-17 World Cup in Uruguay and have been preparing for the competition at the Ghanaman Soccer Center of Excellence in Prampram.

The team have been engaged in several low profile friendly matches.

However, according to information gathered by GHANASoccernet the team will embark on a training tour in USA before leaving for Uruguay.

Ghana have been drawn in group A together with host Uruguay, New Zealand and Finland.

Ghana’s best outcome at the World Cup have been a third place finish in 2012.