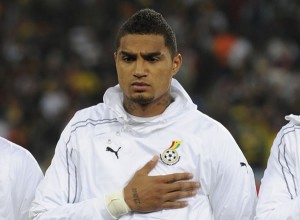 AC Milan midfielder Kevin Prince Boateng has received death threats on Twitter in the wake of his decision to retire from the Ghana national team.

A tidal wave of hatred and anger was directed at the German-born player on social media websites on Friday after the decision became public.

The ex-Germany youth international switched nationality last year to play for the Black Stars when his career was going nowhere with relegated English side Portsmouth.

He gained entry into the Black Stars squad just before the World Cup in South African and after the team reached the quarter-finals he landed a lucrative deal with Italian giants AC Milan.

The 24-year-oldâ€™s decision came just two months before the Africa Cup of Nations and has been receiving threatening messages from irate Black Stars fans unhappy at his decision to quit.

A twitter user wrote on Boateng's account: â€œThe next time u come to Ghana....wait donâ€™t even THINK about coming or else we'll slaughter you!!!â€

â€œPrince Boateng go and ask John Mensah how he had to sneak back into Ghana after that his penalty miss,â€ a female on twitter also threatened.

The hatred and fury, which was also well captured on Facebook, saw fans raining curses on the player with many wishing Boateng career threatening injuries.

Some insults were also poured on the AC Milan with the most offensive words - which are unprintable.

He won nine Ghanacaps and scored one goal.

Boatengâ€™s only international goal came in the 2-1 win over theUnited Statesat the second round of the World Cup in South Africa last year.

But the decision doesnâ€™t leave the Black Stars short of midfield options as youngsters Emmanuel Agyemang Badu, Kwadwo Asamoah, Andre Ayew as well as Michael Essien and Sulley Muntari are still available for the national team.