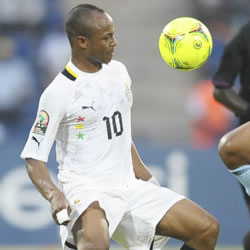 Marseille have reluctantly confirmed that they are willing to sell Inter Milan target Andre Ayew to reduce their wages despite previous denials.

The Ghana international who has consistently been linked with the Italian giants and English club Arsenal following recent impressive performances.

Marseille previously denied their interest in selling the winger butÂ chairman Vincent Labrune says their ambition this summer is to reduce the wage bill.

Labrune did not rule out the selling of the Ghanaian youngster as he mentioned some players they are eyeing to sell.

The French side are in financial difficulty after a disappointing season that saw them finish mid-table in Ligue 1 and miss out on UEFA Champions League football.

Alou Diarra has already left for West Ham and Labrune even went so far as to name the other players the club are hoping to sell - with Chelsea target Cesar Azpilicueta among them.

He toldÂ France Football: "For the next three weeks, as it has been since the start of the transfer window, our objective is very clear - we must sell players.

"It is a major shareholders' instruction. The objectives set by the shareholders about selling are drastic. We are trying to sell to reduce the wage bill.

"Our priority since May has been to get money to make up for the loss due to the 10th position last season and missing out on Champions League qualification.

"Alou Diarra's transfer? In the current context, and considering the market, everyone is happy - the player, West Ham and us. Initially, we didn't forecast selling him.

"We have three players we have agreed to let leave - Cesar Azpilicueta, Stephane Mbia and either Loic Remy or Andre Ayew.

"However, we have changed our mind about Loic. We will see, but we would like to keep him. However, it is difficult to have a definitive position.