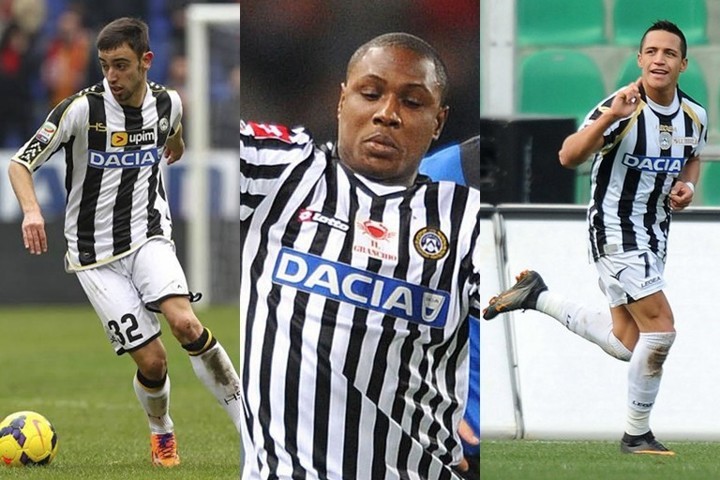 Udinese are one of the more interesting sides in Serie A over the last decade.

While they haven't finished in the top half of the table since 2013 and haven't won a trophy since the Intertoto Cup in 2000, they have nearly always been a side worth watching – especially in the first half of the decade when the Pozzo family's regime was at the height of its power.

Back then, Udinese had all sorts of fantastic players playing for them thanks to their impressive scouting network. Obviously everyone remembers the talismanic Antonio Di Natale, but beyond their immense captain, what other quality players turned out for the Bianconeri? Read on and find out!

Manchester United's hotshot playmaker, the man who is taking the Premier League by storm, didn't just play for Udinese, he developed there. Fernandes joined Udinese as a 19-year-old and they introduced him to top-level football, although he missed out on their peak. He did reasonably well individually before joining Sampdoria and then back home to Sporting, where he came to life.

The reigning Capocannoniere holder and scorer of more worldies than just about anyone else active is a Sampdoria legend and, before that, a Juventus squad player. But before even that he spent two seasons at Udinese, where he formed a tasty strike partnership with the legendary Di Natale (it was when Quagliarella left that “Toto” Di Natale assumed the mantle of leader).

Everyone's favourite Nigerian striker (right now, anyway), Odion Ighalo is arguably a product of the Udinese loan system. He signed for the club a lifetime ago and spent a season there barely featuring, and then began his loan odyssey. Three clubs in three years, including helping Granada gain promotion to La Liga, before the Pozzos finally moved him on permanently to their Premier League venture Watford. The rest, as they say, is history.

The relentless engine of Maurizio Sarri's famed Napoli side learned his craft at Udinese. There he thrived as a defensive midfielder, keeping the ball circulating with tremendous efficiency (a skill that would serve him well under Sarri). He helped the side to a fifth-place finish in 2012/13, showing the kinds of qualities that would make him an essential part of that great Napoli team.

Chile hero, Arsenal misfit, Manchester United flop, Inter… who knows? Alexis Sánchez is known by many faces but not many recall that he exploded onto the scene as a Udinese player. Yes, before Barcelona and superstardom, Alexis was a hard-working little genius of a player for Udinese, a key part of the same side that had the likes of Di Natale, Kwadwo Asamoah and Mauricio Isla in it. Alexis' form in black and white, particularly in 2010/11, was a sight to behold. An unbridled force of nature.

Watford's wing-wizard was signed from Juventus, but his two seasons as a back-up there were built upon his performances for Udinese. The Argentine left River Plate in 2011 at the age of 20, joining Udinese. There his versatility proved most useful as he looked to fill the void left at the club by Alexis Sánchez. He wasn't anywhere near as potent as the Chilean but still did enough to convince Juve to sign him.

The man-mountain whose ability was such that he had Barcelona and Bayern Munich chasing him for multiple summers, who also has a Champions League semi-final goal to his name, first exploded as a talent playing for Udinese as part of the 2010/11 side. Benatia was one of the defensive cornerstones of an electric attacking outfit.

Watford legend and Championship-specialist Matej Vydra has made such an impact in the English game, including as super sub for Burnley, that it is easy to forget that he originally joined Watford on loan from Udinese all the way back in 2012.

Juan Cuadrado is associated heavily with his time playing for Fiorentina and his great successes with Juventus, or even his flop season at Chelsea. What many don't realise is that this pulsating winger started life as a wing-back playing on the same flank as Alexis Sánchez to devastating effect.

Samir Handanovic has become so associated with Inter Milan that many will have forgotten that he spent five glorious years starring for Udinese (actually, he was on their books for nine years #loanarmy) and was the man between the sticks for their incredible seasons finishing fourth (2010/11) and third (2011/12). He joined Inter after that great achievement and became even more of an imposing presence, now arguably the best goalkeeper in Serie A.

Luis Muriel has always been supremely useful on FIFA, but in real life, he's only been intermittently good before this season when he has been part of Atalanta's wild ride into the Champions League quarter-finals. So many will be surprised to hear (well, maybe not if you've made it this far) that Udinese were the club that brought him to European football. He never really took off in Udine, though his potential was always obvious — and it is that potential that has led him to greatness with Atalanta.