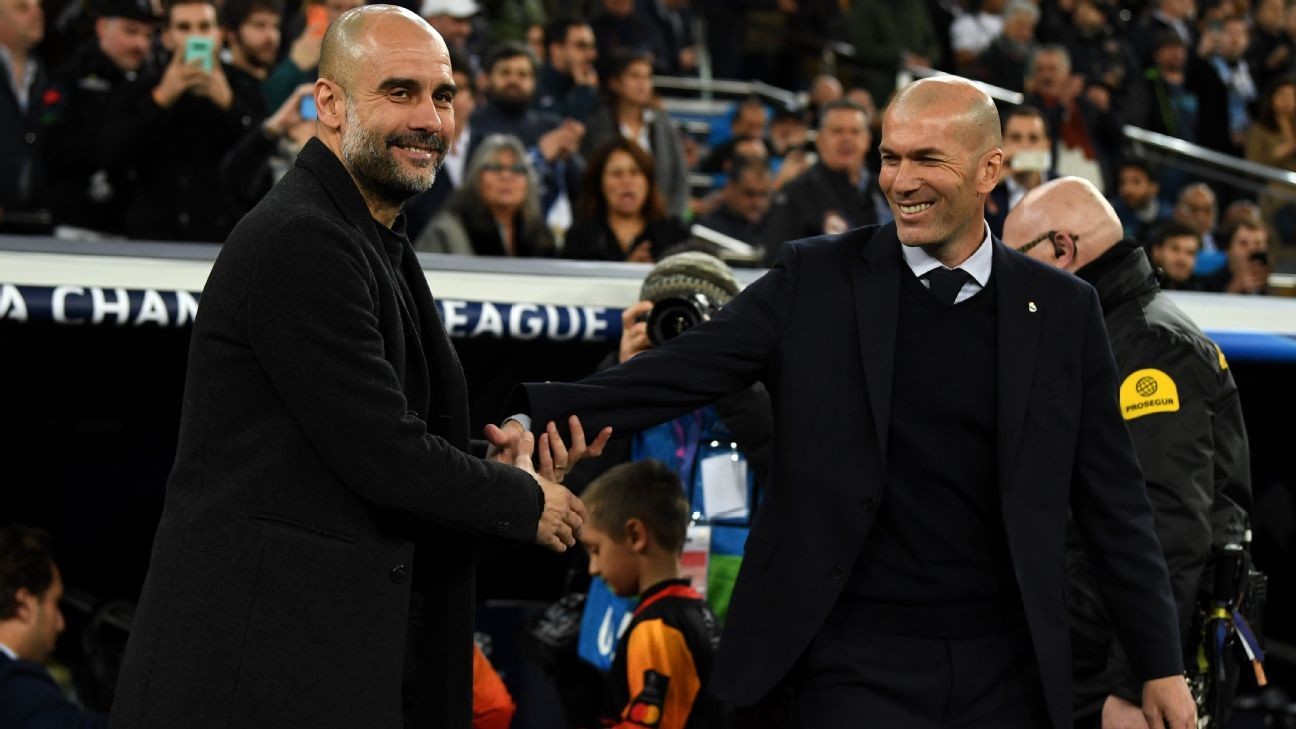 There are not too many occasions when Pep Guardiola looks across at his opponent in the technical area and casts an envious glance, but when Manchester City face Real Madrid in the second leg of their Champions League round-of-16 tie on Friday, he might just do that with Zinedine Zidane.

Here you have two managers who are defined by the Champions League. Guardiola won it twice by the time he was 40, in 2009 and 2011 with arguably the best team in history at Barcelona, and Zidane bagged three European titles in a row in his first spell as Real coach, between 2016 and 2018.

So why would Guardiola want to be in Zidane's shoes, considering his own Champions League record is on a par with iconic managers to have won it twice, such as Sir Alex Ferguson, Ottmar Hitzfeld, Arrigo Sacchi and Jose Mourinho? It is because winning the Champions League again, for a third time, has become an itch that Guardiola has been unable to scratch.

Zidane, by contrast, seemed to win three in the blink of an eye, and he might yet become the first coach to win four with this Real team, who became La Liga champions this season for the first time since 2017. First, of course, Real would have to overturn the 2-1 first-leg deficit at the Etihad and progress to the quarterfinals at City's expense.

Guardiola had seemed certain to win multiple European Cups and rewrite the history books since doing it twice at Barcelona. Instead, it has been nine years since he last led a team to the Champions League title. He might have walked away from Barca in 2012, drained by the demands of managing one of the world's biggest clubs, but three years in charge of Bayern Munich and now four at City have not even brought a final appearance. There were three semifinal eliminations with Bayern, but with City, Guardiola has been unable even to reach the final four, with two quarterfinal exits and a round-of-16 defeat by Monaco in 2016-17 the sum total of his rather unimpressive record at the Etihad.

Pep Guardiola will have to get the better of Zinedine Zidane to reach the quarterfinals. David Ramos/Getty Images

Considering he was hired by City owner Sheikh Mansour bin Zayed al Nahyan in 2016 to win the Champions League, Guardiola has fallen short on the biggest stage. This might be the best chance he will have to end his personal wait for a third European Cup, at the same time as delivering City's first.

Although Real Madrid ended their domestic campaign with 10 wins and a draw following the restart in Spain, they travel to City without suspended captain Sergio Ramos and needing to score at least twice to have any hope of progressing to the final eight in Lisbon next week. City have their own problems, with defensive frailties their biggest concern, but Guardiola's team go into the tie as strong favourites.

Their Champions League downfall over the past three seasons has been, in part, down to Guardiola's habit of overthinking his tactics and selection in the knockout rounds. Against Monaco, Liverpool and Tottenham Hotspur, City were eliminated because Guardiola allowed himself to be outsmarted by his opposite number each time. His team lost the first leg at Liverpool and Spurs, and failed to find a way back in the return fixture at the Etihad and were dumped out by an attacking Monaco side that showed no fear.

There were similar shortcomings with Bayern, whose three semifinal exits under Guardiola against Real, Barcelona and Atletico Madrid were also a result of rival coaches winning the tactical battle. Real Madrid thrashed Bayern 4-0 at the Allianz Arena, lost 3-0 to Barca at the Camp Nou and were knocked out by Atleti on away goals.

This time around, the jeopardy of two-leg knockout ties and the danger of conceding away goals -- or the stress of having to overcome damaging first-leg defeats -- has been removed from the quarterfinal stage onward, with straight knockout ties all the way to the final in this year's competition, remodelled due to a shortened format caused by the coronavirus pandemic. If the tournament goes to form, City still face a tough route to glory, with a likely quarterfinal against Juventus before a clash with Bayern in the semi and perhaps either Atletico or Paris Saint-Germain waiting in the final on Aug. 23.

City's record in one-off cup ties under Guardiola is hugely impressive, winning the past three Carabao Cup finals and, until their FA Cup semifinal defeat against Arsenal at Wembley last month, he had not lost a one-legged cup tie in any competition since February 2018. In Europe, Guardiola needs to keep it simple and avoid the temptation to complicate his own team's approach if they make it through to the quarterfinals. By doing so, he would be mimicking Zidane, who always relied on picking his best XI in their best positions when winning those back-to-back Champions Leagues crowns.

Zidane's three-time European champions proved that simplicity can be devastating if you have the right players. City certainly have those, but time will tell whether Guardiola is prepared to be like Zidane so he can win like Zidane.