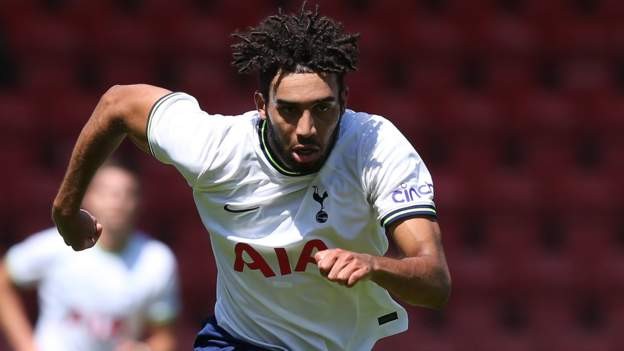 Cardiff City are set to buy Tottenham Hotspur striker Kion Etete after the two clubs agreed a fee, reported to be in the region of £500,000.

The deal for the 6ft 4in forward is set to be finalised once Etete has had a medical at the Championship side.

But Etete spent most of last season on loan at Northampton Town and Cheltenham Town, scoring nine goals in 36 league and cup outings.

"He is close to coming. It's never done until that bit of paper is signed," said Cardiff manager Steve Morison.

"He is an investment for the football club. He has all the attributes to be a top striker. He is young and hungry.

"He is a player we see as a club that is ready now and can get better and better. We'd like to see how far we can take him."

Etete began his career with Notts County before joining Premier League side Spurs in 2019 after a successful trial.

The Derby-born striker is seen as a long-term signing for Cardiff, a player at an age and with a profile Morison is keen to develop, and will become the Bluebirds' 14th summer signing.

"People will just go, 'Oh, he is 6 ft 4in', that's not what he's been brought in for. He's being brought in because he is strong, he's quick, he's athletic," Morison said.

"He will bring other players into the game. He will run the channels. He will run all day long, he will harry and close down. I'd like to think that with playing regular football at Championship level, training with those types of players every day, he will get better and better.

"I saw him at Northampton and one of the big things he needs to do is be consistent. We will ask him to be consistent with his hold-up play, the timing of his runs and his work play.

"We have got a top player on our hands. Just because I've signed someone who is big doesn't mean anything. Rubin [Colwill] is 6ft 4in and he can't head for toffee!"

It is thought Cardiff, who started their Championship season with a 1-0 home win over Norwich City last weekend, are still looking to further add to their attacking resources.

Cardiff are next in action on Saturday away to Reading in the Championship.