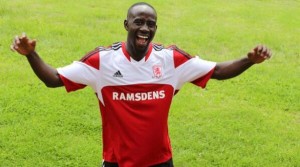 Coach Tony Mowbray made Ghana winger Albert Adomah his fourth signing of the summer on Thursday â€“ with the manager hopeful the winger can be his next piece in the jigsaw for Middlesbrough.

The Ghanaian international signed a three-year-deal yesterday after Boro agreed a Â£1m fee with Bristol City, and will travel to The Valley on Saturday as Boro face Charlton Athletic.

And, after seeing his Boro side create 36 chances and score just one of them in Tuesday night's 2-1 defeat to Accrington Stanley in the Capital One Cup, Mowbray hopes Adomah can make an instant impact on his new side.

â€œI hope he can help create more chances for us,â€ said Mowbray. â€œI get the stats of every game. We had 36 shots at their goal on Tuesday. We scored once.

â€œLet's hope he can nick a goal for us, let's hope he can put it on someone's head or stick it on a plate for someone to score for us, we have to take a better percentage of the chances we create.

â€œWe're striving hard to add competition to that area of the pitch. Albert is a wide right player whose job is to create, to put the ball in the box, to stretch teams, he's not necessarily here to score goals but to create them.

â€œI'm delighted he has signed, first and foremost. It has dragged on a few days, but eventually he put pen to paper. He's a player I've been interested in for a few years, and we've eventually got him. â€œHe's another piece of the jigsaw for us.

"We're at the point where we have to add some footballers, we lost quite a few in the summer, out of contract, moved on, so we're delighted he's here. He brings some speed, some directness, a great work ethic, hopefully some goals, I'm sure he'll create goals for the team. I'm delighted he's here and part of the setup.â€

With Adomah coming to prominence at Ashton Gate while Bristol City were in the Championship, Mowbray has had plenty of opportunities to see the 25-year-old winger in action, and he knows that he has the pedigree to succeed at Boro.

â€œHe plays hungry,â€ explained Mowbray. â€œHe's played against us for the last couple of years and he's scored twice against us. He's a lad who shows those qualities. While his job is to attack, to hurt teams with his pace, he can also come back and put his foot in and do a job for the team.

"Those qualities are evident when you watch him play. Every football manager wants players who can do their job to create and score goals, but if they have a work ethic and get back that's a great added bonus.â€

Adomah joins Dean Whitehead, Jozsef Varga and Frazer Richardson as Middlesbrough's summer signings, and Mowbray is determined to add to that list before the transfer window closes in three weeks' time.