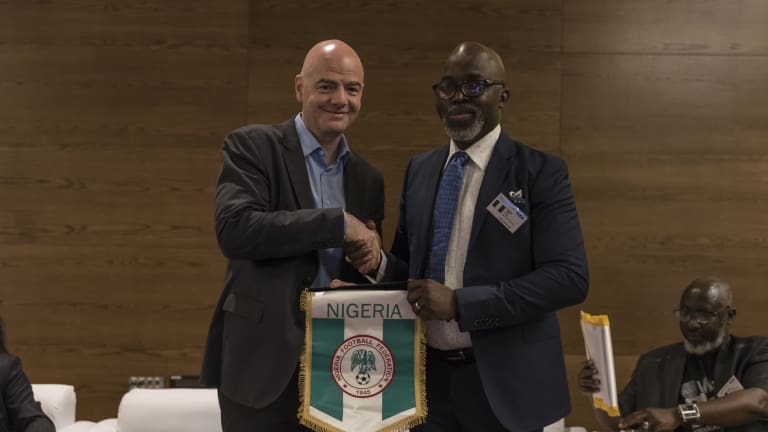 “Nigeria is a strong football country,” Infantino said. “Looking on the titles of the youth teams in FIFA competitions and the huge development and progress in women’s football, we all can remark that the work done here is very good. Now let’s see what happens with the Super Eagles in Russia in a few months. Chances are they will make the whole nation proud, also on the elite level.”

“We need to have some regulations regarding transfers, so they are more transparent, more clear,” Infantino said. “We need to be clear because otherwise we live above our means and for this reason, we are now opening this debate. I hope that by next year we will be able to present a new set of rules which will put a bit more order and credibility in the transfer system.”

The gathering in Lagos was also a time for the member associations to share knowledge with one another, with countries from Africa, the Caribbean and Europe all involved. Hosting these Executive Football Summits is an important initiative introduced as part of the FIFA reforms. The first Executive summit was held in Paris from 22-23 November in 2016, bringing together executives from French-speaking countries across Africa, Europe, the Caribbean and Oceania.

“Are the Russians ready for the World Cup? Yes, definitely. Let’s say they are 99 per cent ready. Of course there are some little things to finalise, some painting work etc but they are ready, you will see.”

“VAR is good to have more honest football,” Infantino added. “We are waiting for the IFAB’s [Editor’s note: The International Football Association Board that decides and proposes alterations to the Laws of the Game] final decision on 3 March. I have to admit that two years ago I was sceptical concerning the use of the VAR. Today I’m convinced that it will be a good thing for football.”

The Video Assistant Referee has been trialled in nearly 1,000 matches and it is used only to review key moments: penalty decisions, straight red cards and cases of mistaken identity.

“In 2018 we cannot afford that everyone in the stadium and everyone in front of a TV screen can see within a few minutes on his phone whether the referee has made a big mistake or not, and the only one who cannot see it is the referee. So if we can help the referee, then we should do it.”

President Infantino concluded the summit by remembering Chinedu Udoji, a 28-year-old Nigerian player who sadly died in a car crash on Sunday 18 February.

“We are of course all sad about the death of Nigerian player Chinedu Udoji. Our thoughts are with his family."

Van Basten: Together we can achieve the best for football