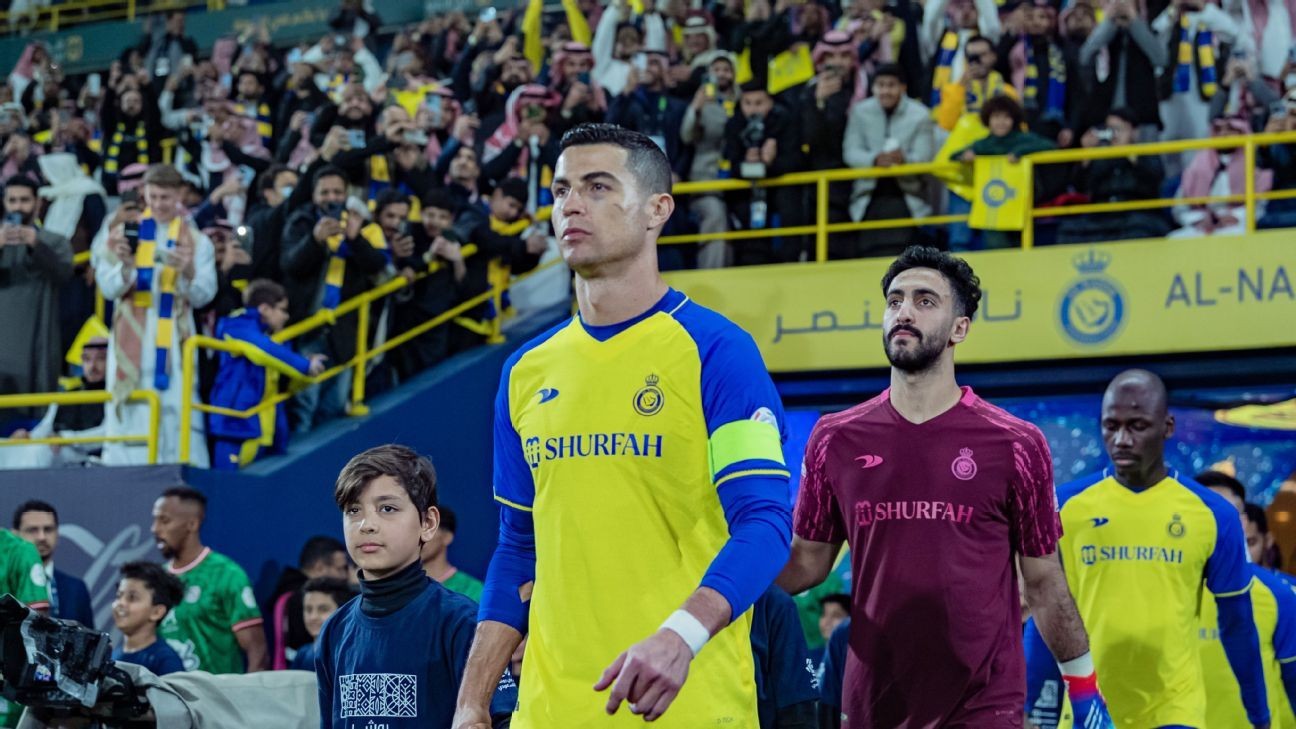 RIYADH, Saudi Arabia -- Cristiano Ronaldo's new chapter began with a win, but not a goal, as Saudi Arabia showed off the most expensive athlete in history for the first time.

Al Nassr beat Ettifaq 1-0 to go top of the Saudi Pro League, but Sunday night at Mrsool Park was about nothing else beyond the Portuguese striker who has signed up to earn $200 million a year for the next two-and-a-half years. Aaron Judge's new nine-year, $360 million contract with the New York Yankees -- a recent megadeal in American sports -- doesn't even come close, and even though Ronaldo didn't manage to find the net in his first official appearance, his new club, the league and the country will feel he's already value for money.

Shortly before kick-off against Ettifaq, Al Nassr's official Twitter account posted: "The world is watching." That might not have been the case considering this game was up against a top-of-the-table clash in the Premier League between Arsenal and Manchester United, but there can be no denying the impact Ronaldo has already had. Suddenly everyone knows Al Nassr and their yellow and blue shirts.

Ronaldo, playing for Al Nassr for the first time after appearing in a friendly against Paris Saint-Germain on Thursday, is still getting used to his new surroundings and ran out to warm up in the wrong half of the pitch before being waved back by his teammates. Eventually in the right place, he went through his pre-match routine in front of a bank of yellow flags and chants of "Ronaldo, Ronaldo," then two bangs of a drum followed by "siu!" Again. Then again. And again.

Al Nassr fans have been made to wait to see Ronaldo in their colours after an English FA ban picked up during his time at Manchester United delayed his debut for nearly a month. The club had been reluctant to even acknowledge the suspension, but once supporters worked out Ettifaq would be his first opponent, tickets for the game sold out within three hours.

If this is the last time Ronaldo and Messi face off, they didn't disappoint in the desert4dRob DawsonMessi vs. Ronaldo: Their head-to-head record and most memorable clashes6dChris Wright and ESPN Stats & InformationWhat Ronaldo can expect in Saudi Arabia22dMark Ogden

Questions about Ronaldo's ban aren't the only ones to have gone unanswered. On Saturday, 24 hours before his debut, there was a steady stream of fans buying Ronaldo shirts from Al Nassr's Riyadh store -- they cost 364 Saudi Riyals (around $100) -- but there has been no confirmation of the number sold since he signed.

There are also questions about where Ronaldo's salary is coming from. At his unveiling earlier this month, Al Nassr president Musalli Almuammar suggested significant commercial deals would quickly follow, but there is yet to be any announcement. Officials from the Saudi Pro League say they have had no involvement in the transfer beyond accepting his registration, but what is clear is that last year, the Saudi Sovereign Wealth Fund (PIF) committed $2.3bn in sponsorship agreements with domestic football clubs.

Al Nassr bosses expect rival clubs to soon pursue deals for a superstar of their own, and Saudi Sports Minister Prince Abdulaziz bin Turki Al-Faisal has pledged to "support the rest of our clubs for quality deals with international stars soon."

Ronaldo's debut for his new club Al Nassr didn't get the big moment he will have been hoping for, but the time will come for goals. Mohammed Saad/Anadolu Agency via Getty Images

In the meantime, though, Al Nassr are enjoying their new icon. His picture in the rafters of the stadium was given centre stage alongside manager Rudi Garcia, once of Roma, and his every touch against Ettifaq was cheered regardless of whether it was good or bad. His first two were poor as he was dispossessed twice, but he soon settled into a game that had none of the pace or intensity of a Premier League fixture.

There was plenty of time and space for his tricks and step-overs, each one celebrated by the crowd, and maybe it's part of the reason he's chosen Saudi Arabia.

After struggling to keep up while playing for Manchester United or Portugal, he's back to being the best on the pitch, just like he was in his prime, although there is still a lingering feeling that his presence here is slightly out of place. It's like LeBron James leaving the NBA to finish his career in the Chinese Basketball League, or Tom Brady taking his final snaps somewhere in Eastern Europe. Ronaldo is collecting lots of money -- around $550k a day -- but little in terms of prestige.

Ronaldo failed to score Sunday but did get to dazzle the crowds with some tricks and flashy passes. FAYEZ NURELDINE/AFP via Getty Images

After five Champions League titles and five Ballons d'Or, Ronaldo will probably feel that he doesn't need any more, although he does still have the will to score. When two of his new teammates decided to see out the final minutes against Ettifaq with a game of keep-ball rather than crossing into the penalty area, Ronaldo slapped his hands down on his legs in frustration. He wanted a debut goal.

"Everyone knows Cristiano Ronaldo, he is one of the best players in the history of football," said Garcia afterward. "It's very important for us to do everything possible to put him in the best conditions. I want him to enjoy playing and tonight he was happy to play with his new team."

Before leaving the pitch, Ronaldo went over to applaud the Al Nassr fans behind the goal who had spent the night bouncing up and down and waving yellow flags and gave a thumbs-up to girlfriend Georgina Rodríguez as he disappeared down the tunnel. He was followed by more chants of "Ronaldo, Ronaldo" and a collection of Ettifaq players who looked like they were keen to take home his shirt as a souvenir.

One fan did take home something special: after being picked at random during a half-time prize draw, they discovered they'd won a car. Saudi Arabia is that kind of place.

An hour after the full-time whistle, Ronaldo was whisked out of the stadium by his personal security team and driven back to the plush Four Seasons Hotel in Riyadh's Kingdom Tower where he has been staying since his arrival. His new chapter -- possibly the final chapter -- is officially underway.