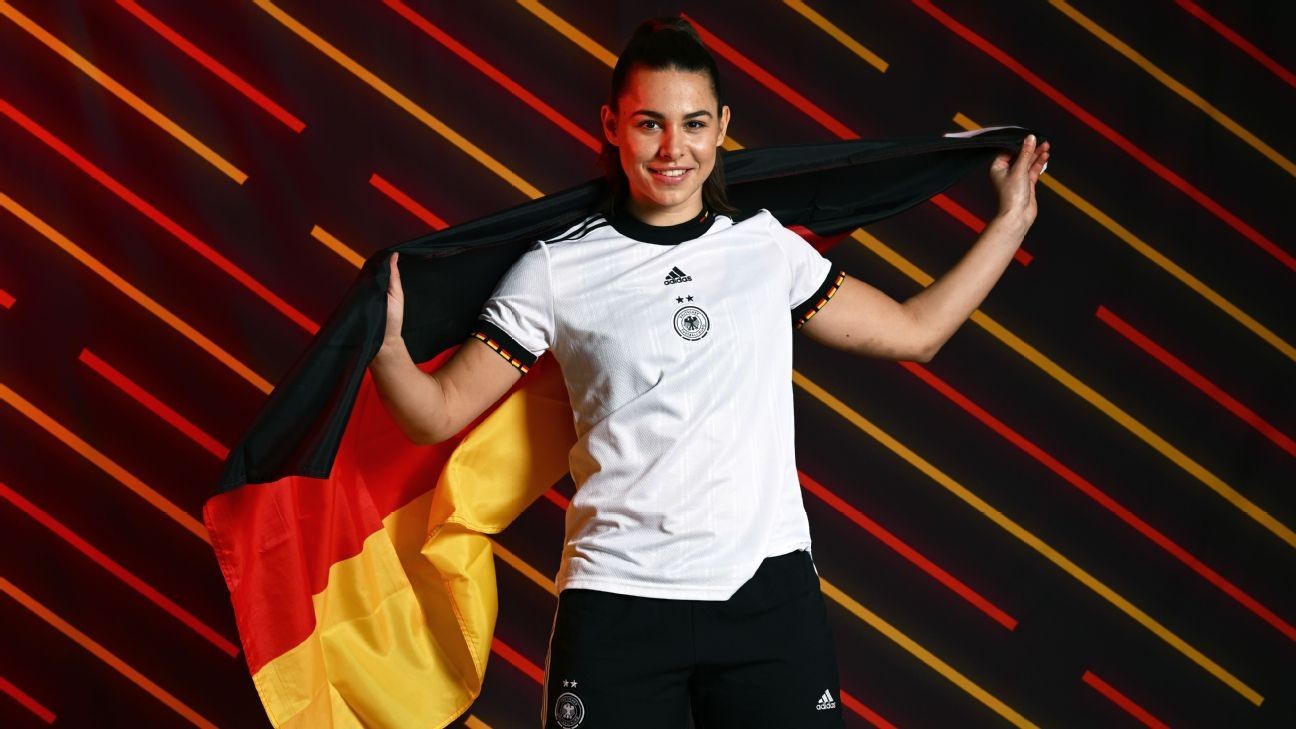 When Germany arrived in England ahead of the 2022 European Championships, there were familiar questions around the eight-time champions. But Germany, with a resolute team spirit and a resilient midfield, have impressed en route to Sunday's file (watch LIVE at 11:30 a.m. ET on ESPN and ESPN+).

Although most players in the squad would automatically opt to praise the team ethic as a whole rather than their individual contributions, few players have stood out like midfield lynchpin Lena Oberdorf. Capable of advancing into the No. 10 role or dropping into the No. 6, the versatile Oberdorf has over the years played most roles on the pitch, even finding herself between the sticks in the past.

Predicting Euro 2022 champ: England at home, or Germany the surprise spoiler?6mESPNPopp's remarkable scoring record ensures Germany are back into the Euro final2dKathleen McNameeWiegman on England's Euro run: 'This is history'3dReuters

A tough tackler with a nose for danger, Oberdorf's first senior outing was with the German national team in their run up to the 2019 World Cup -- the Gevelsberg native was handed her debut at 17, two months before making her World Cup bow, becoming the sixth-youngest player to represent Germany at the biggest tournament in women's football.

With Germany's Achilles heel having long been their back line (notably the centre-back positions), Oberdorf's early run in the team was in the backline. Yet, for all the plaudits she received, it was clear she wasn't being utilised to the best of her abilities. In time, Germany coach Martina Voss-Tecklenburg moved the youngster forward, deploying her into the middle of the park where she featured for SGS Essen before her move to German champions, VfL Wolfsburg.

At Wolfsburg, Oberdorf has only refined her game and continues to belie her relative youth -- as she remarked after Germany's first game at the Euros: "I don't recognise that I'm 20. I feel like when I'm on the pitch, everybody sees me as like a 28-year-old player."

Playing a starring role in her second major tournament with a growing cache of team and individual accolades, it is certainly easy to forget that Oberdorf is only 20, but as she says: "I just forget about my age, just play, just have fun, just get into the duels because that's what I can do the best."

Indeed, take-ons and tackling are where the midfielder shines, but rather than simply throwing her body into challenges and sliding along the grass with studs raised, the midfielder is adept as reading the play and timing her interventions. She may lead the tournament in bookings -- three yellow cards in 354 minutes this month, the culmination of her back-to-back yellows in the group stage meaning she sat out Germany's win over Finland -- but she is far from a rash player.

Coming into the final, Oberdorf ranks third at the tournament for successful duels with 69 and is tied for second with 19 tackles, which isn't too bad for her tally of cards, not least given she grew up watching Sergio Ramos clips online, the Spanish defender also never far from the referee's book.

Lena Oberdorf is a defensive midfielder, not a striker, but the 20-year-old just might be Germany's most important player in Sunday's Euro 2022 final. Alexander Scheuber/Getty Images

Having grown up playing football in the garden alongside her father and brother -- Tim, who players for Fortuna Düsseldorf in the 2. Bundesliga -- Oberdorf also spent playing on boys teams. Standing at 5-foot-9 and built to be just muscular enough, the midfielder cuts an imposing figure in the women's game -- but on a team with teenage boys, she fast learned she needed to be smart as well as strong. This can be seen in her challenges, the 20-year-old knowing when to step in and get her body between the opposing player and the ball, or when to stretch out a leg to swat the ball away with a flick of her heel.

As well as an unerring team mentality this summer from Germany, we've seen a calmness about how the team has gone about their duties on the pitch. As explained by forward Svenja Huth, a teammate of Oberdorf's at Wolfsburg: "It's been important throughout the whole tournament that we've had a good mix of experienced players that bring a certain ease."

With a squad that is split between young and old, with ten players aged 24 or younger and six in their 30s, it would be easy to just think of a centurion like Alex Popp as one of the experienced players, yet it would be wrong to discount the the calmness from the likes of Oberdorf or Giulia Gwinn, both of whom are at their second senior tournaments.

It's when the team is asked to defend -- to get behind the ball as a group and refuse their opposition any clear or obvious routes through to Merle Frohms' goal -- that the assured play from Oberdorf shines. Or, when up against a rapid French counterattack, Oberdorf's ability to read the play and arc her run before sliding to take the ball off the attacker without a shred of panic that she displays the traits of one of the senior players in the squad.

In many ways, Oberdorf typifies the group Voss-Tecklenburg has brought together: young but experienced, talented yet humble, individually brilliant but entirely focused on the success of the collective team. Oberdorf was unavailable for selection last time Germany clashed with England, a loss at the Arnold Clark Cup -- a friendly four-team tournament held in England in February -- and if the Lionesses are to again have similar joy at the final, they will first need to overcome the cornerstone of the German midfield.

In an era of the attacker being king, Oberdorf is not the type of player to steal the headlines or make the front pages -- yet without her consistency and talent, Germany would not have gotten this far. She's obvious choice for player of the tournament, and Oberdorf could yet have her crowning moment this Euros.