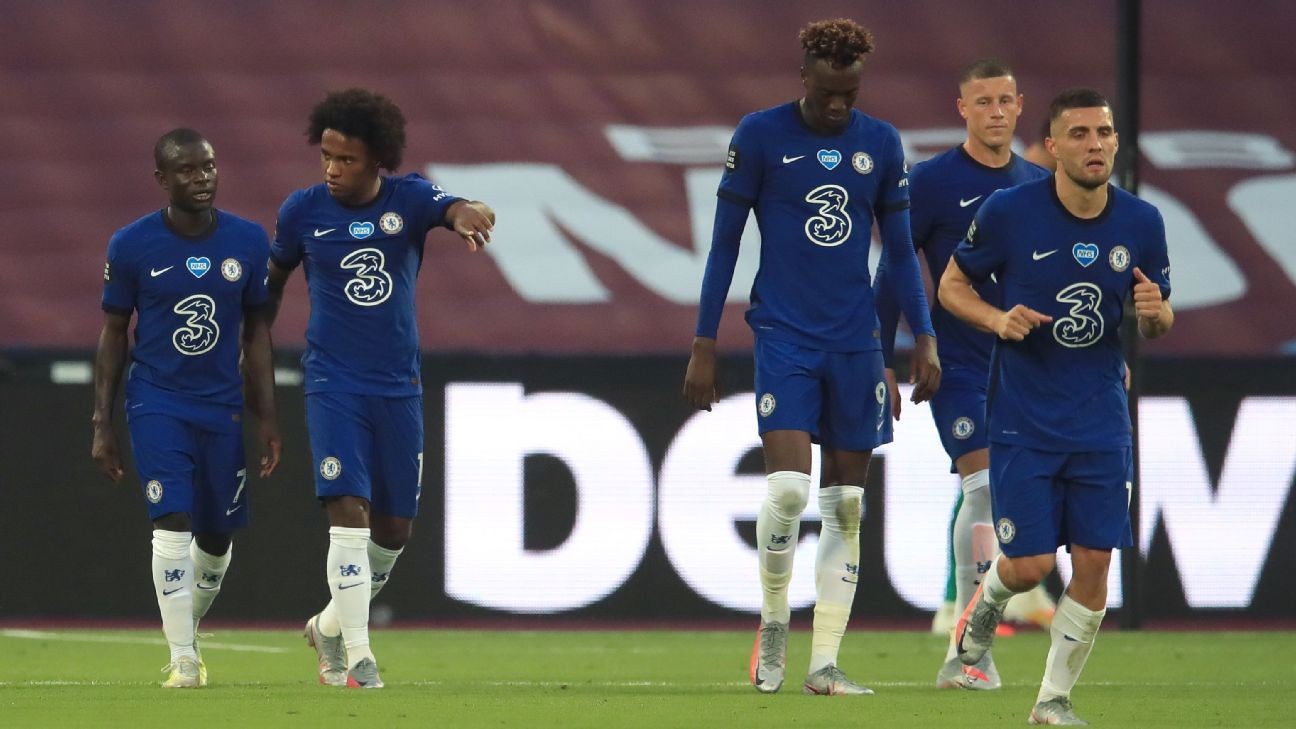 LONDON -- Ben Chilwell won't fix Chelsea's defending by himself. Frank Lampard has serious designs on a Premier League title challenge next season, but the Blues must surely target further reinforcements at the back for that to become a reality. That's not to say Chilwell isn't a fine player. He is valued in excess of £60 million as a result of the consistency he has shown at Leicester City and the quiet progress in making the England left-back spot his own.

He might even have stopped the decisive goal in Chelsea's 3-2 loss to West Ham at the London Stadium. Chelsea over-committed themselves in search of a winner with a minute left, Michail Antonio fed substitute Andriy Yarmolenko and suddenly West Ham were in. Antonio Rudiger practically ushered Yarmolenko into the one thing he wanted to do, cutting in on his left foot, before the winger smashed a low shot past Kepa Arrizabalaga.

It was a desperately poor piece of game management with both full-backs caught so far upfield they were almost in Westfield shopping centre, but one that arose from similarly absent-minded defending earlier in the match that gave the Hammers confidence an upset was possible despite the dramatically contrasting form of both teams before kickoff.

Chelsea's performances since the restart have engendered a belief they could rival Liverpool and Manchester City next season. The arrivals of Hakim Ziyech from Ajax and Timo Werner from RB Leipzig only increased excitement around Lampard's project with more encouragement gleaned from the active pursuit of Kai Havertz at Bayer Leverkusen. The Blues will surely be a force to be reckoned with next season -- especially if they land Havertz and Chilwell -- but it is difficult to imagine this group of defenders matching Liverpool's uncompromising resilience.

At the very least, Fikayo Tomori and Kurt Zouma, who formed a promising pairing early on in the campaign, may be knocking on the manager's door a little louder now, but there isn't a single centre-back at the club who looks beyond reproach. City ultimately lost their title because of their defensive record, conceding 33 times to Liverpool's 21. Chelsea have now been breached 44 times, seven times more than Crystal Palace in 12th and once more than Newcastle in 13th. It is a dreadful record, featuring a vulnerability from set pieces that Lampard and his coaching staff have struggled to address. Chelsea even had the benefit of an early warning as West Ham were denied an opening goal by VAR shortly after the half-hour mark.

Jarrod Bowen swung a corner to the back post, where Tomas Soucek and Antonio tried to force the ball past Kepa. Antonio was flat on the ground when Soucek shot, beating Kepa with a low right-footed effort from close range. VAR determined after more than three minutes that Antonio was offside and blocking Kepa's line of sight.

However, it turns out it doesn't matter if Kepa can see the ball or not. After Willian scored from the spot at the other end, West Ham appeared to be going into the interval crestfallen and behind, but they remembered what was palpably a training ground move from another Bowen corner. Again, the January signing from Hull City delivered the ball to the back post and again Soucek was there to meet it. This time he headed the ball into the net as Kepa floundered under minimal pressure from Antonio.

Kepa is beginning to present a real problem for Lampard. Chelsea have been blessed with Petr Cech and Thibaut Courtois, two goalkeeping titans of the Premier League era, and it seemed almost inevitable that lineage would continue when the Blues spent £71.6m to acquire Kepa from Atletico Bilbao in August 2018.

It is perhaps easy to forget the Spaniard is only 25 and his travails are not dissimilar to David De Gea's early years at Manchester United. However, the world's most expensive goalkeeper is afforded less margin for error by definition and the mistakes are mounting up this term. Lampard dropped Kepa earlier this year for six matches for Willy Caballero in an effort to prompt a renewal of focus. A repeat may not be too far away on this evidence, and should it come to pass, occurring so close to the summer, will only fuel speculation Chelsea may be open to a more permanent departure.

Chelsea's calamitous defending vs. West Ham highlights an issue that could keep the Blues from kicking on next season. Getty

Rudiger is widely regarded as Chelsea's best centre-back, but he was run ragged by Antonio. He pulled back the West Ham striker in the box for a foul that would surely have been given upon VAR review, had Pablo Fornals not picked up the loose ball, fed Bowen, who crossed for Antonio to score.

Willian hauled Chelsea level with 18 minutes remaining through a sublime free kick, won by Christian Pulisic. Both Willian and Pulisic were excellent against Manchester City last week and they carried the fight again here, the U.S. international continuing his fine form on a night when Tammy Abraham was subdued on his first start since Feb. 1 and Mateo Kovacic did little to justify his recall at the expense of Mason Mount.

But whatever potency Chelsea had going forward was undermined by their porous defending at the back, a failing exposed by a team with little track record in recovering from adversity like this. West Ham had lost all 15 league games when conceding first this season. They had also taken just one point from losing positions all season. Only Norwich have a worse record in either respect.

Yet Lampard stuck to the assessment he has often offered up in defeat this season, pointing the finger further upfield.

"No, we weren't let down by the defenders," he said. "We made mistakes in the build-up to the goals, not just the defenders, which cost us the game. I wouldn't call it a wake-up call because every game is different. We've got six games ahead of us now and if you play in the Premier League and you make mistakes, if you dominate possession and don't quite do enough with it at the top end of the pitch, then it can happen. That's something we already knew."

Lampard's verdict hints at a continuation of Chelsea's plan to strengthen other areas of the team. It may be one of the most important decisions he makes.