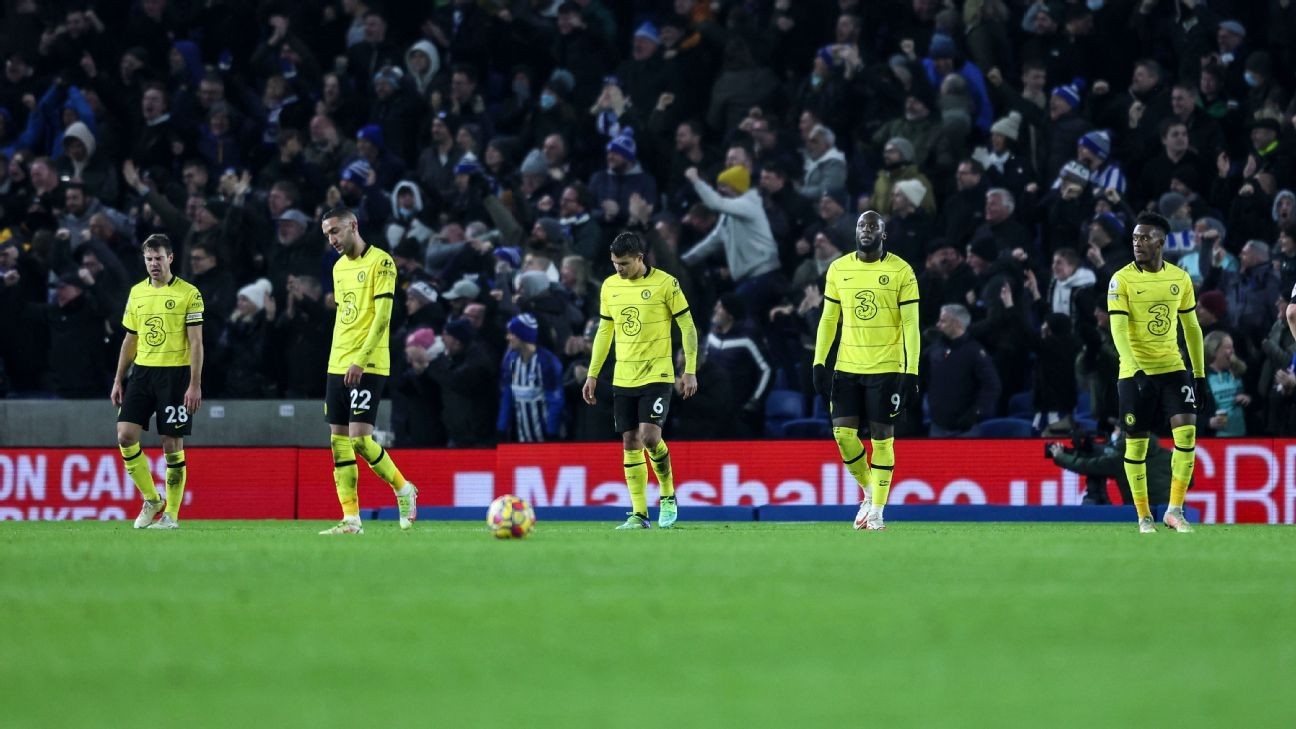 BRIGHTON, England -- Hakim Ziyech's reaction to his goal said it all. Chelsea's standout moment on another disappointing night, which extinguishes the faintest lingering title hopes, came against the run of play midway through the first half as the Dutch-born attacker's deflected strike snuck inside Brighton & Hove Albion goalkeeper Robert Sanchez's near post.

A smile never even threatened to break across his face. Only Jorginho's embrace stopped Ziyech from walking straight back to the halfway line. Instead, his teammates ran to join in what could very loosely be described as a celebration, and a frank conversation quickly ensued between Ziyech, Mason Mount and then Marcos Alonso, which involved some urgent pointing and gesticulating.

Chelsea had been outplayed up until that moment, and after Brighton rediscovered their poise to draw level, that pattern continued in a second half that saw Adam Webster equalise and the home side spurn several promising moments to find a winner to ultimately settle for a 1-1 draw -- a familiar feeling for Graham Potter's side this season.

Blues boss Thomas Tuchel described all this as merely signs of fatigue. "We are mentally tired and physically tired and you can see it in our performance. It is as easy as that."

He was also happy to make light of Ziyech's inability to take any joy from his first league goal since Dec. 1. "Happy -- he can score 20 more and not celebrate, I have no problem with that," he said.

As the players walked off the pitch at half-time, Ziyech and Romelu Lukaku began another exchange that can, at best, be described as a clear difference of opinion over Chelsea's method of attack. The television camera accompanying them could barely have been closer, perhaps prompting Ziyech to at least cover his mouth to conceal his part of the conversation, but Lukaku's dismay was unchecked.

This is, however, in danger of becoming a worrying new normal for Chelsea.

Recent exertions are undoubtedly a mitigating factor; Brighton had an extra day to prepare for this game, itself rearranged after an original postponement due to COVID-19, and Chelsea's trip to Manchester City three days earlier will undoubtedly have left a mark given how much Pep Guardiola's side make almost every opponent chase the ball. But it was hard to escape the feeling that Chelsea's negative body language ran deeper than simple fatigue.

Their performance barely improved in the second half and the inertia seemed to even affect Tuchel, who began the first half in typically animated form, frustrated at Chelsea's error-strewn play, before retiring to his seat in the dugout for large chunks of the second half. The 48-year-old has forged a reputation for game-changing substitutions and tactical alterations, but here he waited until the 80th minute to make a rare triple change, but by that stage it was already too late to reverse Brighton's momentum.

Afterwards, the usually genial Chelsea boss was abrupt in one television interview, urging the reporter repeatedly "Don't do this" when referencing a fourth consecutive league game without a win -- incidentally, the longest run Tuchel has experienced as a manager since October 2016 at Borussia Dortmund.

Chelsea looked second best for much of their 1-1 draw at Brighton on Tuesday. Robin Jones/Getty Images

The Blues last won in the Premier League on Boxing Day. Here, they barely threw a punch. Tuchel is hoping two days off triggers a revival.

"[We need it] so, so badly," he said. "You can say it is an excuse or whatever but it is like this. Look at our schedule, look at the schedule when we arrived at Man City.

"We had a Carabao Cup match in between, they did not. Now we arrive here, they had more days to prepare, they had the whole week to prepare before. We played since November, we play and play and play. We need to recharge the batteries. We need to disconnect, this is my feeling, that's why we give the players two days off."

They look pretty disconnected already, certainly from the top of the table, where they expected to be when signing Lukaku for €115 million from Internazionale last summer.

This draw leaves Chelsea 12 points behind City having played a game more. Tottenham Hotspur are up next at Stamford Bridge on Sunday, and although they have beaten Spurs comfortably over two legs already this month in their Carabao Cup semifinal, defeat would leave them ever more vulnerable to being drawn into a top-four scrap with West Ham United and Arsenal among those closing in.

"I will not talk about single players today," he replied. "It is not about Romelu, too much questions about Romelu and there are too much answers about Romelu. Romelu is by far not the problem, he is part of the solution."