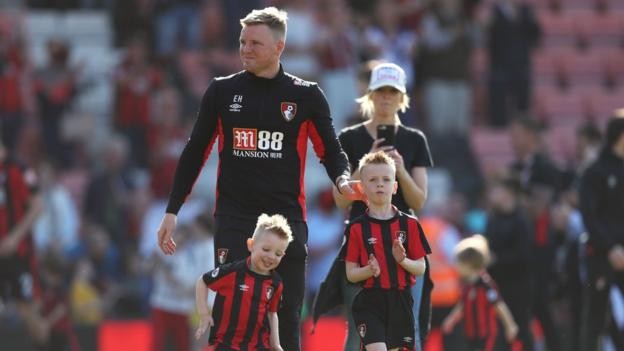 In addition, the Cherries have placed "a number of staff" on paid leave by using the government's furlough scheme.

That pays 80% of their wages but a club top-up means they will get full pay.

Tottenham, Newcastle and Norwich are other top-flight sides who have put non-playing staff on furlough.

A Bournemouth statement said: "As the Covid-19 pandemic continues to gather pace, there are far more questions than answers regarding its effects.

"One thing is for certain however, the wellbeing of our employees, supporters, local communities and everyone around the world is of far greater significance than football matches.

"There is no script for moments like this. No tactics and no set plays to find a winning formula, but as a board we are continually looking at ways to ensure the future of the club and our employees is protected when the season returns."

'Only fair to finish the season'

English football is currently suspended, with the end of the season pushed back indefinitely.

“I find it better to not read anything and just be told what the outcome will be,” Howe told BBC Radio 5 Live.

“Everyone is putting suggestions and ideas forward. Looking at all the different things is pointless; it’s a waste of energy.

“The authorities and everyone connected with football will be making decisions to ensure it’s the fairest it can be for everybody.

“The only fair way is to finish the season. Everything else would be unfair on somebody. But the season can only be finished with everyone’s health in mind. That is absolutely critical. We cannot play a game of football if it jeopardises the health of someone in the general public.

"I am a firm believer in that and football has to come secondary to that.”

#GoalsAtHome: Can you recreate this Alli volley at home'I try not to coach my boys too much'

While Howe says football is on his mind “every day”, he is currently juggling his day job, including organising his players' training regime from a distance, with the other challenge of home-schooling his children.

“It is quite a new experience for me, as two of my boys are of school age,” said the 42-year-old.

“I’m really enjoying spending time with my wife and boys, which is something I don’t get chance to do normally, so I’m trying to look at this positively.

“We’ve been in the garden kicking the ball around which has been great. I remember as a kid just wanting to kick a ball, score a goal, imagining being in the FA Cup final.

“What I try to do is not coach them too much. One is five, the other is eight - if I ended up spraying cones around the garden I think they would very quickly lose interest.”

While Howe’s tutoring efforts seem to be largely going to plan, his attempts to recreate Norwegian band A-ha’s greatest tracks have not exactly been a hit.

He said: “The piano has been getting some good use. My boys have lessons and I’m teaching them something I haven’t really got a clue about.

“I’m into my 80s music and I say to my wife, ‘name this tune’. She never has any idea of what I am playing.

“I can hear it and I know what I want it to sound like but she has got no idea – it’s definitely my playing.

“I’m a massive A-ha fan and I have five or six of their albums in sheet music. I’m just not good enough to play it, I’m still off that level.”