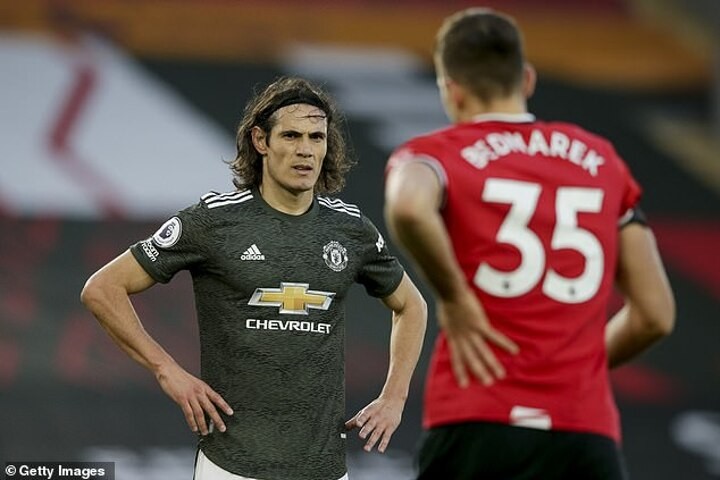 Edinson Cavani and Manchester United are facing an anxious wait to find out if he will be in hot water with the FA for the social media post which sparked a race storm.

The FA are looking into a now-deleted message from the Uruguayan striker in which he responded to congratulations following his two-goal display at Southampton with the phrase ‘gracias negrito,’ a Spanish term with racial connotations.

Cavani could receive a minimum three-game ban if the FA decide his Instagram post was in breach of their rules after updating their guidelines on sanctions for discriminatory behaviour ahead of this season.

But the case will not be treated like an on-field incident which can involve charges being fast-tracked in order for a hearing to take place before a potential offender would next play.

Instead, the initial investigation will involve a longer process while the FA gather evidence before deciding whether to charge Cavani.

It may not be until the midweek at the earliest before the FA are in position to determine whether Cavani has a case to answer.

The post remained on Cavani’s account for some time before it was deleted after he was informed by Manchester United officials about the offence caused.

Cavani, who could be asked to give his observations, and United insist the term ‘negrito’ was used as one of affection.

The incident quickly led to comparisons being drawn between Cavani and his fellow Uruguayan Suarez.

Cavani’s countryman, then Liverpool striker Suarez, was banned for eight games and fined £40,000 for using the word ‘negro’ after clashing with United defender Patrice Evra in 2011.

Suarez attempted to argue in his FA hearing that the word in Uruguay and other parts of Latin America is inoffensive in certain situations.

In his book he later insisted the word does not mean the same in English as Spanish and he was unaware of the difference and it’s ‘highly-offensive’ meaning here at the time, even though he used it in a row with the Frenchman. His suggestions were rejected by the FA’s independent commission.

He also explained in his book: ‘Negro can refer to anyone with dark hair as well as dark skin and I’ve been used to the word being used in Spanish in this way all my life.

‘My wife sometimes calls me “Negro” or (the diminutive version) “Negrito”. My grandmother used to call my grandfather “Negrito” and she would occasionally call me that too.’

The FA published updated punishment guidelines ahead of the start of a new season in a clampdown on racism and discriminatory behaviour.

Any on social media will carry a minimum three-game suspension for culprits compared to bans of between six and 12 games for offences that take place in matches.

The bans were increased after Manchester City’s Bernando Silva and Tottenham’s Dele Alli were suspended for just one-game last season after breaching FA rules with posts on social media.

The new FA policies mean the fact incidents may take place privately or ‘outside of a standard football setting’, such as Cavani’s, would no longer be a reason for offenders to be spared punishment.