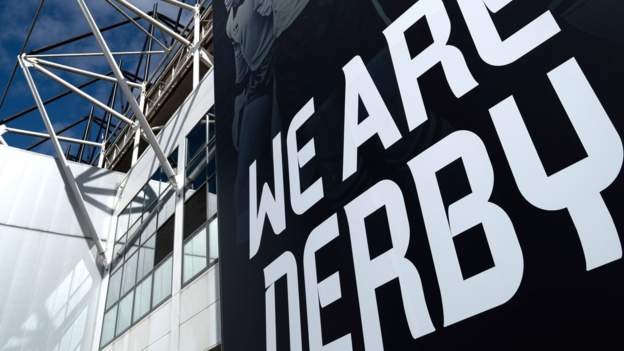 Administrators Quantuma have been looking for a buyer since September

Derby County's administrators have been told to show the English Football League how they intend to fund the club until the end of the season.

An EFL Board meeting resolved to try and bring clarity to the situation.

Although manager Wayne Rooney said he expected a preferred bidder to be named by the end of this week, BBC Sport understands that is unlikely.

However, hopes of a deal being struck are hampered by outstanding legal cases against Derby involving Middlesbrough and Wycombe.

Should these eventually go against the club, any compensation would be regarded as a 'football' debt and need to be paid in full.

It is understood that neither potential bidder is willing to take Derby on without some clarity over this issue, and the EFL has suggested brokering a deal with Middlesbrough and Wycombe may be the best way forward.

The only ways Derby's administrators Quantuma can generate funds at present is either by selling players or if a preferred bidder expresses a willingness to put their money into the club.

Derby turned down what Rooney described as "ridiculous" bids for players earlier this week.

However, some Championship rivals are understood to be unhappy about offers being rejected - at the same time as Derby are negotiating with HMRC over a deal that will see in excess of £20m go unpaid, from an overall bill of £28m.

It is not known yet whether any party will be willing to pay non-football creditors 25% of the sums owed. Unless that happens, Derby will be deducted 15 points next season.

The Rams are bottom of the Championship on 11 points, a further 11 from safety.

Without proof of funds, Derby are not allowed to sign players, so an extension to former England defender Phil Jagielka's contract, which runs out on 17 January, cannot be executed for the time being.

Under the circumstances, it is unlikely that Jagielka will be involved in Saturday's game against former club Sheffield United.