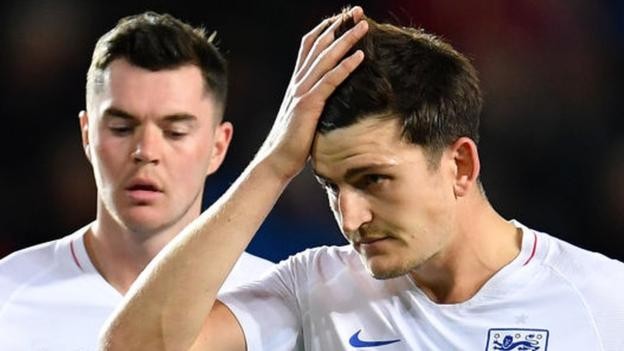 We didn't play well enough, simple as that - Southgate frustrated by England defeat

The Three Lions face Bulgaria in a Euro 2020 qualifier on Monday looking to get back to winning ways after losing 2-1 to the Czech Republic on Friday.

Defensive errors were punished in their first Euro qualifier defeat since 2009.

"It's certainly something we've considered," said Southgate on a possible defensive switch.

"I think we are in a difficult situation in terms of the players that have played international football with us in that area of the pitch and who are playing regularly with their clubs.

"So, that's part of the reason we didn't do that [against the Czech Republic].

"I'm not sure, ahead of Monday, if that's the right thing to do but we're very aware and assessing those things."

However, Stones is unavailable through injury while Walker has not been included in the squad.

Asked if there is enough time to make a defensive change to the system before Euro 2020, Southgate said: "I think so, I think players take in tactical concepts very quickly, especially top players.

"So, we have to keep reflecting on what's working, what's possible and learn from every experience we have."

Maguire, who lined up in the centre of defence in Prague alongside Everton's Michael Keane, believes some of the England players' poor club form could have contributed to the below-par performance against the Czech Republic.

Maguire's Manchester United are 12th in the Premier League after a disappointing start to the season while Keane's side Everton have lost five of their opening eight games.

Asked if there was a lack of confidence among the England defence Maguire replied: "Yes, maybe.