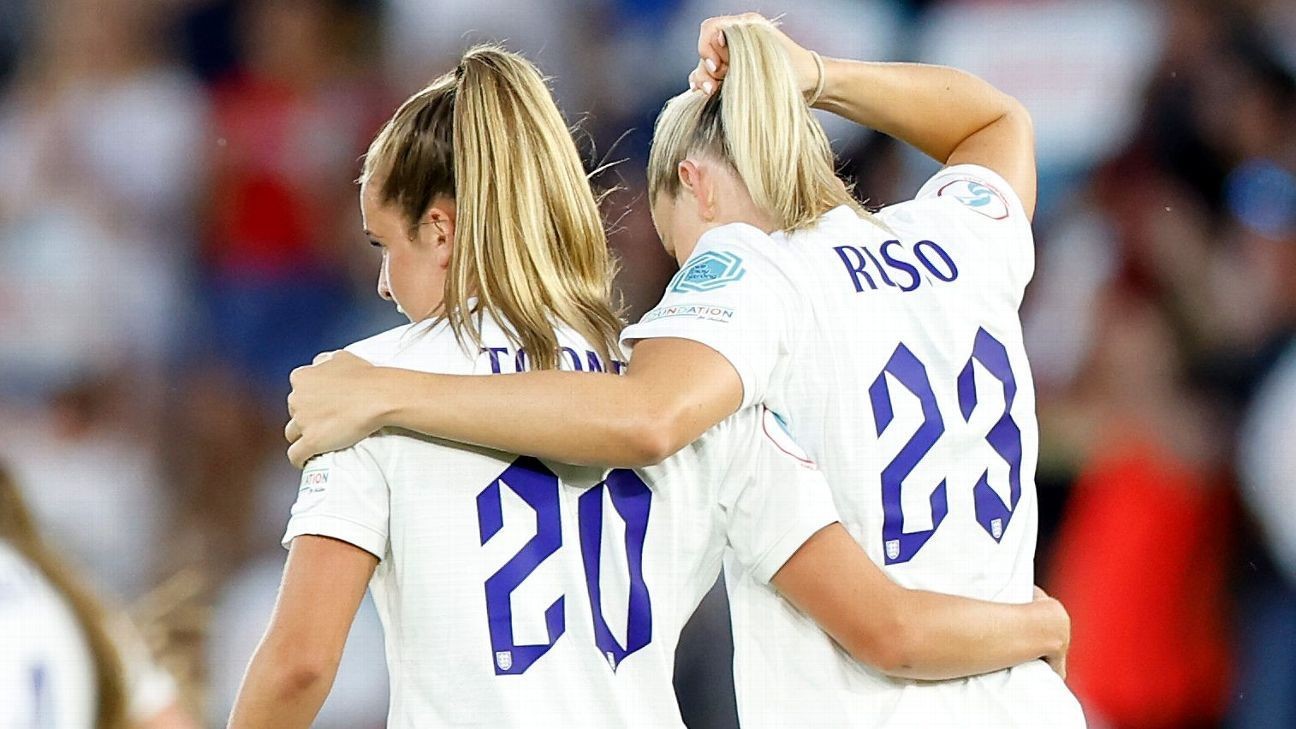 BRIGHTON & HOVE, England -- Throughout England's UEFA Women's Euro 2022 campaign, coach Sarina Wiegman has been steadfast in her starting XI. Looking at their results and performances before Wednesday's thrilling 2-1 extra-time win in their quarterfinal against Spain, you could see her reasoning for sticking with her usual selection.

However, there have been two players making the case for more involvement, and they further proved that on Wednesday with an assist and goal when England needed it most -- Alessia Russo and Ella Toone. Both have been used as super-subs by Wiegman, generally replacing Ellen White and Fran Kirby between the 45 and 65-minute marks (although Toone did also come on for Georgia Stanway against Northern Ireland).

The duo -- who are Manchester United teammates and have been best friends since they were teenagers -- have had an impressive impact whenever they have come on. Russo got her first-ever goal in a major tournament in the historic 8-0 win against Norway and scored a brace against Northern Ireland, including one of the best strikes of the tournament. Toone got her first international goal against Spain to draw England level and managed to make much more of an impact than Kirby, who was played out of the game.

"I'm glad that we can demonstrate that [squad depth] because we have talked about that," Millie Bright said of Russo and Toone's performances after they came off the bench against Spain. "Our substitutes have taken us to the next level when they came into the game. I thought they were incredible.

"In a game that is so mentally and physically tough, they do really boost you. I don't think you think about how tired you are. You just think about the next action and then you see them coming on and it helps."

Euro 2022: England's comeback win vs. Spain shows a new side of this special team12hTom HamiltonEngland's Wiegman: 'I went a little crazy' after win13hKathleen McnameeDoes England's Euro 2022 squad have a diversity issue?2dMark Ogden

The performances of these two youngsters gives Wiegman a bit of a selection headache heading into their semifinal against either Sweden or Belgium. Russo is firing in more goals than veteran White -- who struggled with even staying onside against Spain -- and hasn't scored in two games.

Toone has a harder case for a starting place, but she has shown she is more than capable of holding her own. Perhaps more importantly, the duo have a connection due to their club ties which has seen them both set each other up for goals across multiple matches. Could this be England's star partnership of the future?

"We never gave up," Toone said after the Spain game. "It was the first time we've gone behind and we showed character and resilience. We pushed each other. Buzzing. The fans helped as well."

England and Manchester United teammates Ella Toone and Alessia Russo have been best friends since they were teenagers. Lynne Cameron - The FA/The FA via Getty Images

The conversation about whether Russo should be starting ahead of White had already been happening before the tournament. While White has been struggling with a dry spell in front of goal, Russo scored 11 times and got four assists for United in the Women's Super League. She is versatile whether she plays on the left, right or down the middle and has shown in this tournament particularly that she is an incredibly physical player with great movement. She has been directly involved in nine goals (seven goals, two assists) in 11 games for England, with eight of those coming as a substitute. In comparison, White got 11 goals and seven assists in all competitions last term, which was one of her worst seasons ever. Her style of play is different to Russo's, too, often more found poaching goals from within the box than running at a defence and building an opportunity that way.

However, Wiegman has shown that she likes routine and to change her starting No. 9 at this stage would be a massive deviation. Although, Wiegman is unafraid of the hard decisions: she didn't include Steph Houghton in this squad, after all, and made Leah Williamson the new captain.

Toone was also impressive in her performances leading up to the Euros. In her 12 games before the tournament, she had scored nine goals (including two hat tricks). Toone has also shown her ability in the WSL, with six goals and eight assists for United in 19 appearances. When United were struggling toward the latter end of the season, it was often Toone who popped up with a moment of magic. She has shown she can excel as a creative No. 10, making quick runs and using her sharp passing to her full advantage. Her game management is exceptional as she is able to pick out spaces that others might not see, something she did to great effect against Spain.

"She's got loads of rough edges that I don't want to file down too much because she has the quality and wonderful ability to make things happen," United coach Marc Skinner said of Toone after she made her 100th club appearance.

While Toone has been impressive, her direct rival for spot in the team is most likely Kirby, who struggled against Spain but has shown her exceptional quality in other games. She is tied with Beth Mead for most assists at the tournament and her classic unselfish style of play has been apparent. Toone could also come into the England midfield, but the partnership of Stanway and Keira Walsh has been humming well and it seems unlikely Wiegman will change that unless there is an injury to either player.

Whatever Wiegman does, she has two excellent options on the bench in these two players, and even if Euro 2022 isn't the tournament in which they cement their starting spots, it feels like that isn't too far down the line.

"Every game, the subs have an influence. It shows the depth in our teams and the eagerness of every player to start," Wiegman said postmatch. "But everyone is also all the time on the same page. They do that so well and we're all supported and everyone knows their role.

"It starts with the quality of the players. We have so much quality in our team that it is easy to make a substitute."