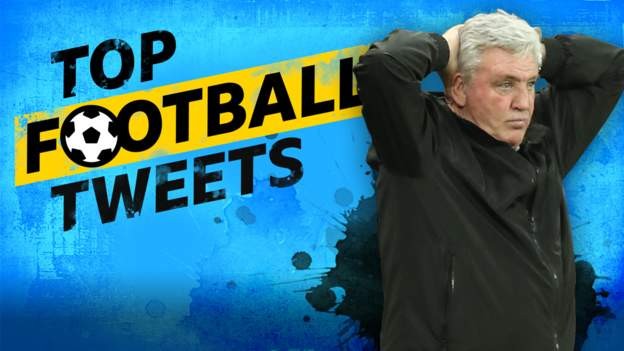 Steve Bruce and Ole Gunnar Solskjaer are under pressure, Mohamed Salah is in a league of his own, Southampton beat the algorithm, and it went from banter to brawl in Rome.

Here are some of the best tweets from the weekend's football.

1. Some things haven't changed at Newcastle

Newcastle hosted Tottenham on Sunday in their first match since their takeover, which is backed by Saudi Arabia's Public Investment Fund.

But after a disappointing 3-2 defeat, questions remain over manager Steve Bruce's future.

New chairman Yassir Al-Rumayyan and part-owner Amanda Staveley was at St James' Park to watch it all, alongside some other familiar faces.

Defeat left Newcastle in the relegation zone - and they are yet to win a league game this season.

Newcastle United 2-3 Tottenham Hotspur: I'll carry on until I hear otherwise - Bruce2. Mo of the same

After scoring a brilliant individual goal against Manchester City last time out, Mohamed Salah may actually have managed to net a better one in the 5-0 win over Watford on Saturday.

And goalkeeper Jordan Pickford certainly couldn't be accused of not doing his homework before the match.

A goal from Armando Broja on his first Premier League start gave Southampton their first league win of the season as they beat Leeds.

There is no metric to quantify this opinion, but somehow it feels undeniably correct.

A very spirited performance from Toney and Brentford was not enough as they lost 1-0 to Chelsea on Saturday. They had 17 shots but Edouard Mendy was impossible to beat.

Leicester City beat Manchester United 4-2 in a thriller at the King Power Stadium on Saturday.

Before the match, Ole Gunnar Solskjaer had told the press that striker Marcus Rashford (who scored United's second) needed to "prioritise his football".

After the match, the main questions were for Solskjaer.

Elsewhere, Sergio Aguero made his long-awaited Barcelona debut as they beat Valencia 3-1 and Charlie Adam scored on his return from injury for Dundee.

The two seemingly unrelated events are linked by a tweet from 2011.

One of the more remarkable scenes from the weekend occurred when Glentoran keeper Aaron McCarey lashed out at one of his own team-mates.

View more on twitter9. Did he forget which team he was on?

There was also a bizarre incident at the Stadio Olimpico on Saturday, when a bit of misjudged banter ended up in a brawl.

And, finally, big news for fans of the Plantagenets, as it's confirmed that this depiction of the last King of York will be returning to a home crowd

All About Michael Holding: Listen to a revealing conversation with one of cricket's defining voicesThe best of the Bond villains: Exploring the memorable music that made 007's foes