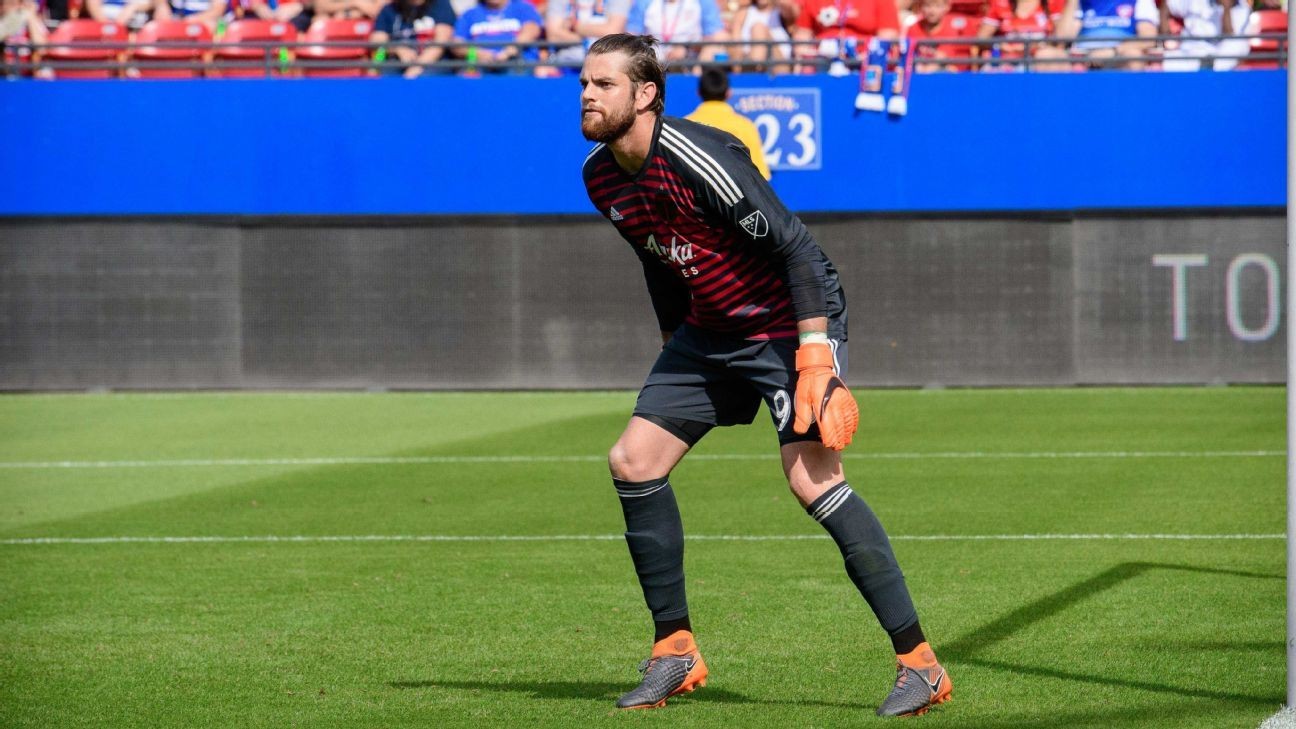 Heading into the 2018 MLS season, life couldn't have been much better for Jake Gleeson. He was living his dream of playing professional soccer as a goalkeeper for the Portland Timbers, and doing it in a city that he loved. He had already been part of one MLS Cup-winning side and at age 28, he still felt like his best years were ahead of him.

Two years later, Gleeson's dream is gone following a calamitous series of events that started with surgery to treat stress fractures in both shins and has left him unable to walk without pain.

Gleeson is seeking more than $10 million in economic and non-economic damages.

In an interview via video conference, Gleeson says the doctors named in the suit "took my life, took my livelihood and what I dedicated my life to do, and kind of just left me there to pick up the pieces. It's been absolutely crippling, devastating. I wouldn't wish the last two years of my life on anyone."

The Timbers, who were not named as defendants in the suit, couldn't be reached for comment.

It was in the summer of 2018 that Gleeson's life took a drastic turn. He was suffering from pain in both shins and x-rays revealed stress fractures in both tibias. The Timbers' team doctors recommended that metal plates be inserted into both shins. The surgery was performed on Aug. 15, and a month later, Gleeson's recovery was going well. He expected to be back on the field in October.

Gleeson promptly sought out new doctors and was diagnosed with necrosis and osteomyelitis in both of his shins, meaning that portions of the bone became infected and died.

"I was in surgery the next day," he says.

Gleeson estimates that he has had 12 surgeries in total, the last several of which were to remove pieces of dead and infected bone.

MLS is Back Tournament: Why your club can win it all, and why it probably won'tMLS is Back: How the league, players are coping with COVID-19 concerns in FloridaInside MLS is Back: Food pics go viral, how teams are adjusting to 95-degree heat

In the court filing, a copy of which has been obtained by ESPN, the suit alleges in part that the defendants were negligent in that the plates weren't properly sterilized prior to surgery. It also contends that there was a "breach of sterility" at Oregon Outpatient Surgery Center that wasn't disclosed to Gleeson. It also alleges that the doctors selected "aggressive and risky procedures" for Gleeson, without first trying more conservative therapies. Lastly, it asserts that there was "no clear orthopedic necessity to implant the devices."

The complications that arose from the surgeries sent Gleeson through a grueling rehab. A catheter was inserted into a vein so antibiotics could be sent directly to Gleeson's heart. He had a tube sticking out of his leg to remove the pus that would collect. Gleeson recalls spending months on a couch; getting up to go to the bathroom was a challenge. He said he couldn't begin to count how many oxycodone and morphine pills he had taken for the pain.

Gleeson attempted to regain the strength needed in his legs in order to return to the field, but too much damage had been done, which remains with him to this day.

"In terms of running, jumping, or trying to get back to train, those things aren't really in the cards for me right now," he says. "I have a lot of shin pain and nerve pain still."

Gleeson recalls that through the end of 2019, he still held out hope that he could play again. But activities that were once easy are now herculean tasks. He can only walk a few miles at a time. Treadmill sessions last around a minute before the pain becomes too much.

"It really hit me that I was never going to be the player that I was," he says. "So, even if my legs got to a point where I could play, I wouldn't ever get back to that level. MLS is gone for me now."

Jake Gleeson filed a malpractice lawsuit over a surgery that has ended his MLS career with the Portland Timbers. Jerome Miron-USA TODAY Sports

The physical aspect of his recovery wasn't even half the battle. That he couldn't get over the hump physically bled into emotional turmoil, exacerbated by the likelihood that his career was over. Gleeson said he struggled with panic attacks, anxiety and severe depression.

"I had these pills in front of me, and I thought to myself 'if I just took these, then that would be the end of the pain,'" he said. "That crossed my mind more than once because I realized at some point that this is probably my career. This is my life and I was just angry and confused about how someone could do this. To take these liberties with my health, especially my career, I look back on that now, and I'm upset that I got to that point. But at the time, when you're on that much medication, it's tough to see the other side of it.

"I definitely was pretty dark for a few months. I'm still coming out of it now."

Gleeson said his support system -- one that included his family and his girlfriend, Jordan Farrell -- helped him pull through. He also started seeing a therapist, which helped him articulate and process what he was experiencing.

"When you're stuck with your own thoughts and you don't feel comfortable saying them, going to a professional you can talk to really, really helped me," he said.

Gleeson's physical activity is now limited to hikes and rounds of golf. He quips that golf is his "therapy" now, although his new normal is to expect some level of pain when he walks. Gleeson admits that because of the discomfort, he hasn't processed all of his anger. Some nights he'll be wide awake and his mind fixates on what happened and what might have been. Other nights, he'll wake up, unable to return to sleep. The daytime can be difficult as well.

One regret that Gleeson has is that he never got to say goodbye to the Timbers Army or the city of Portland. There was never an official retirement because of what was going on with this recovery.

"I was a 19-year-old kid when I came in here, when we were still in USL," he says. "I watched the team grow into MLS and then win MLS Cup and go to the finals twice, go to the playoffs. For me it was a phenomenal experience.

Gleeson is now attempting to rebuild his professional life as a coach. He recently signed on to become the goalkeeper coach for the women's team at St. Mary's College in Moraga, California.

"People say your life can change in an instant," he said. "They weren't lying about that."

Gleeson is hoping now that his life will change for the better.