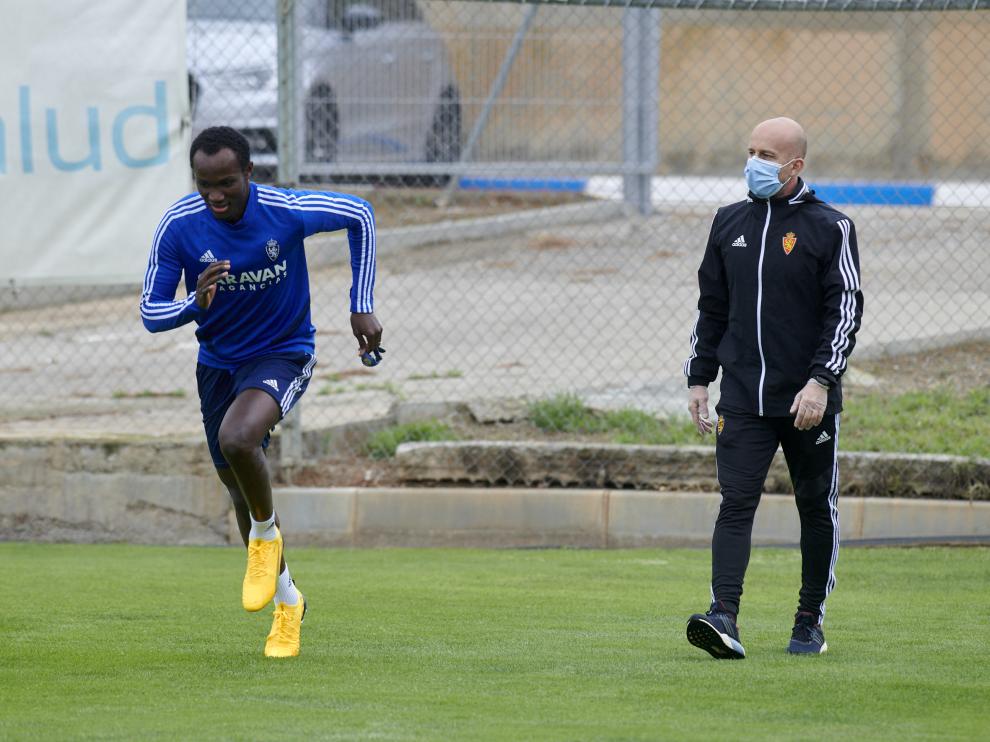 Raphael Dwamena continues to work alone in the Sports City, following a light training routine that is allowing him to regain his fitness in football, after seven months away from his dynamic of preparation due to the heart condition that has forced him to stop to his career as a footballer.

Hand in hand with Andrés Ubieto, one of the club's specialists in physical preparation and rehabilitation, the striker alternates gentle running exercises and ball touch, with gym routines that avoid, above all, explosive or high-intensity efforts.

It is a way that Dwamena – loaned from Levante, but a Zaragoza player for contractual and federative purposes despite not now being enrolled in LaLiga - feels like a footballer.

He is wanting it that way. His commitment, since October, despite the numerous opinions and medical reports that recommend otherwise, is focused on returning to high-level soccer. For this, a slow, progressive pattern has been set, with the aim that future reviews can give the green light to compete.

It will not, however, with Real Zaragoza. At least, that is now the position of the club, a position that the footballer and his environment know, as well as in Levante. Although, as the case may be, Zaragoza, with the extension of the season, could re-enroll him - he processed his discharge in November to sign Puado - if he received the medical discharge player because five months have passed since the diagnosis of his illness long duration and has free chips in the squad, it is unlikely that Dwamena will play football again with the Aragonese team shirt.

Another thing is in the future, once the transfer contract expires in Zaragoza, and returns to the discipline of Levante. The African's will is to play again, but it will already be a matter outside the sphere of the Aragonese club.

At the moment, Real Zaragoza, as it has been the same since the beginning of this sad process. He is putting all possible means and resources at the service of the player so that he can fulfill his dream when he can.

Thus, in the Ciudad Deportiva facilities, Dwamena has continued to be one more in the group dynamics. Now, in addition, he has already put on his boots and trains.

He does it at low rates, very controlled, in continuous medical supervision, jogging with the ball, in the gym machines ... Fed his belief that he will be able to be useful in high competition football in the future.

Dwamena had a successful operation at the Miguel Servet University Hospital in the Aragonese capital for his heart problems at the end of January.

The intervention, carried out by the team of the Arrhythmia Unit of the health center, and coordinated by Dr. Aso in the presence of the head of the medical services of Real Zaragoza, Ireneo de los Mártires, consisted of two phases: a first one consisting of the carrying out an electrophysiological study and, subsequently, the implantation of an ICD (Automatic Implantable Defibrillator) that protects you in the event of serious arrhythmias.

In October, Dwamena was diagnosed with a structural heart disease that made him prone to developing malignant ventricular arrhythmias.