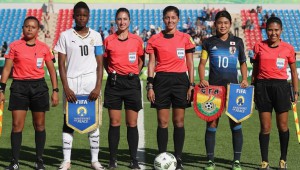 Ghana's junior national Under-17 team are suffocating under gargantuan financial burden in a pathetic episode which has left young females struggling to buy sanitary pads at the ongoing FIFA World Cup in Jordan.

The Black Maidens were demolished 5-0 by Japan in the ongoing FIFA Under-17 World Cup in Jordan.

The team is teetered on the edge of crisis as the financial burden escalates in the Asian country.

“As I speak to you now not a cedi in terms of per diem have been paid to the girls. Things are very difficult for the team financially," Black Maidens management committee chief Augustine Asante told Spice FM.

"There is no money for the girls to buy soaps and Sanitary pads .No one have been able to make a call home."

The Black Maidens have also not been paid a dime since they started preparations for the 2017 Africa Under-17 qualifiers.

The Ghana FA say they are unable to pre-finance this time around after the ministry failed to remit earlier arrangement.

The country's football federation say they are in a "critical financial position" with a crippling debt suffocating the federation.

But there is a widespread believe that the show of power-play and showboating has left the team gasping for financial salvation.

The frosty relationship between the Ghana FA and the Sports Ministry is well documented amid a growing concern which appears to be affecting the operation of the various national teams.