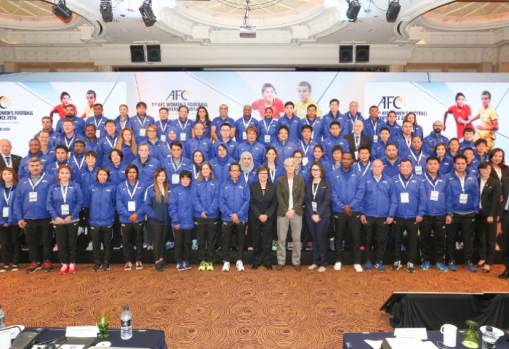 Powell spoke about how to define success at different levels and in various roles of the game, giving some strategic and concrete advice to the participants.

Hope Powell said: "Remember, success isn't always about winning the gold medal. Everyone cannot be Japan, at least not at the same time."

Stressing the importance of increasing girls' and women's participation in the game before thinking about ensuring success for the senior team, she advised the participants: "Get the numbers because the cream will always float to the top."

The last day of the conference included a feedback session gathering the main points the Member Association (MA) participants had raised in the discussion groups the day before. The sessions were structured around four questions:
What is the current status of women’s football in your country?
What can be done to raise the standard of women’s football at the top level?
How can the AFC improve its elite competitions?
Is there one thing that you would introduce that would have major impact on women’s football in Asia?

The key issues raised and debated by the MA representatives included different suggestions for women's competition development, as competitions are central to raising standards and boost development. A specific issue mentioned was assistance to less developed MAs, and the AFC Women’s Assistance Programme (WAP) was pointed to as an option for securing customised support for individual MAs. Raising the game at all levels is vital, as the increased competition will bring benefits to all, including the elite level.

Some other areas raised by the continent’s women’s  football experts  were women’s league development, available facilities and scouting. Many MAs expressed enthusiasm about the idea of a continental women’s club competition.

A major theme that came up several times was the importance of promotion and raising awareness of the women’s game. Australia was mentioned as a good example of cross-promotion where the media appeal of the men’s game is used to draw attention to women’s football. AFC Women’s Football Committee Chairperson and Executive Committee Member Moya Dodd commented: “It is an effective method, and often free. The spotlight is already there, we just need to bring the women’s game under it.”

Some MAs promote their women’s football activities prominently on social media, for example the Philippines, where the national Philippines Women’s Football League was launched only last week.

The conference concluded with a comprehensive discussion, led by AFC Technical Director Andy Roxburgh and Head of AFC Women’s Football Development Bai Lili, bringing together the various issues that had been covered during the three-day event.