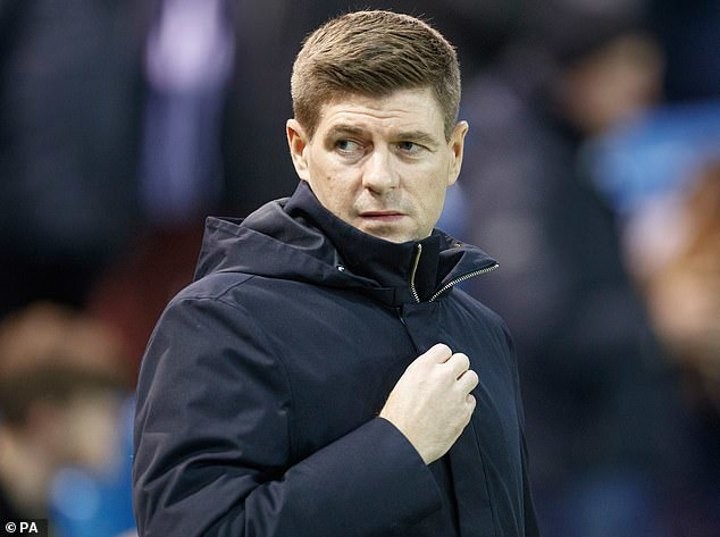 Steven Gerrard admitted he will keep a keen eye on how the Premier League decide to punish Manchester City amid rumours the club could be stripped of their 2014 title.

The reigning champions were rocked by a two-year Champions League ban imposed by UEFA after Financial Fair Play breaches, and the Premier League could also retrospectively act after a separate investigation.

Gerrard captained Liverpool during the campaign in question, and infamously slipped at Anfield against Chelsea to all but hand City the top flight trophy.

And the Rangers boss revealed he was interested in how the situation may unfold, with City set to appeal their ban to the Court of Arbitration for Sport - and the Premier League may later decide to deduct points from previous seasons.

‘I read that myself this morning,' Gerrard said. 'We will wait and see. From a UEFA point of view, it is a real strong sentence or punishment.

‘I’m sure they will appeal so we will wait and see what the outcome is on that. Then we will see whether the Premier League act from there.

‘I will give you a comment once I know that the Premier League decide to do. But if you look at the severity of the punishment from UEFA, something has gone badly wrong. So I’m really interested to see the outcome of that. Until I get the punishment from the Premier League, I won’t comment. But I’m really, really interested in it… for obvious reasons.'

‘It’s all ifs and buts. It is what it is. Manchester City were champions. As I sit here right now, congratulations to them. They are champions.

‘Until things develop, if they develop, it’s all ifs and buts. I’ve got nothing to say on the matter. All I say is I’m very interested because of the severity of what UEFA have put out there. That tells me that something has gone badly wrong. We will see how that progresses.’

The 2014 title race is renowned for its countless twists and turns, with Liverpool topping the standings until a limp defeat against Jose Mourinho's weakened Chelsea side at Anfield.

Gerrard's slip inside Liverpool's half proved costly, with Demba Ba racing through unchallenged to slide home the opener - and Willian sparked wild celebrations from the travelling contingent after wrapping up the victory deep inside second half stoppage time.

But City's moment of glory could be stripped over financial breaches, with the Premier League rule book allowing a commission to deduct points retrospectively.

This would impact on City's league finishes in the seasons affected, which appear to be from 2012 to 2016.