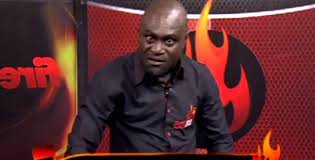 Agyemang, aka Countryman Songo, Abatay and the media company have been hauled before the law courts as hearing on the long-standing case starts in the Ghanaian capital on Monday.

Nyantakyi is cutting short a football-related trip abroad to give evidence on Monday in the case that will see over 100 tape recordings tendered in evidence to back his claim of libel.

He will mount the witness box to open his case as he seeks to clear his name following persistent accusations of criminality and fraud on the radio station by the two presenters.

The GFA boss is suing the Countryman Songo, Abatay and the media company for $2m in the defamation and libel lawsuit after 'years of consistent lies and calculated negative campaigns', Nyantakyi will tell on the court.

This comes just three months after three journalists were jailed in Ghana for threatening some judges in the country on their radio station Montie FM.

The presenter and Multimedia Group Limited, the holding company of Asempa FM, have filed their witness statements, paving the way the case to be heard. The case also connects with another presenter Kofi 'Abatay' Asare Brako who has left the radio station but he also pursued at his new station Atinka FM with fresh claims in an upcoming suit.

Countryman Songo and the media company are required by the court to appear on Monday after Nyantakyi produced over 100 recordings of 'scandalous lies calculated to defame him and the football federation'.

The recording dates back from 2012 until 2015 when Abatay was a presenter at Asempa FM before switching to Atinka FM. As such the two presenters are being held to account over their claims on Asempa FM against Nyantakyi. Ghana FA president Kwesi Nyantakyi.
The radio station and its parent company have also been accused of giving an unfettered platform to damage the reputation of Nyantakyi  - as some its other Twi language stations toe a similar line.

The lawsuit claims false reports about Nyantakyi were "broadcasted by Asempa FM throughout the world" via the internet and has severely damaged his reputation and good name.

Led by one of Ghana's best legal brains Teddy Sory, lawyers for Nyantakyi are seeking punitive damages for libelous statements calculated at damaging his reputation in the eyes of the public.

Ghana's leading football official says Asempa FM and its reporters damaged his reputation and he is seeking Eight Million GhC8m ($2m) in the suit.

The lawsuit comes three months after the country was rocked by the jailing of three journalists but the legal experts say the action of Nyantakyi is 'long overdue' because of the consistency and ferociousness of attacks on his personality.

There is strong suspicion that some sports presenters and their analysts have been bribed by some people seeking to take over the GFA to bad mouth Nyantakyi and the federation to pave the way for them to takeover.

Two years ago Ghana FA announced a public boycott of Asempa FM for the 'consistent lies calculated to demonize the federation in the eyes of Ghanaians with false and one-sided reports'.

Delegations from Multimedia were sent to the federation to beg the leaders to renounce the boycott but reversing of the decision only escalated attacks on the GFA and Nyantakyi.

The lawsuit, filed at the Fast Track court in Accra, said the reports on Nyantakyi by the radio station were "false and malicious" and he is armed with evidence which have been marked as slanderous.

Nyantakyi said their claims have caused him "humiliation" and "distress" and that he "has been subjected to unfathomable amounts of ridicule and public scorn".

The legal challenge has got wide implications for Asempa FM as Nyantakyi holds international positions on Swiss-based organisation FIFA, CAF and he is also the leader of the West Africa Football Union (WAFU).

Watch video of Songo on Nyantakyi

Despite complaints to the owners and manager of the radio the attacks went on unabated as it reached its apex on 11th November 2014 when Kofi Asare Brako called Nyantakyi 'a thief' and 'has defrauded Ghanaians for far loo long'.

Multimedia, a company claiming to be based on Christian ethos, has encouraged its presenters to libel Nyantakyi and several officials of the GFA have been defamed with lies to the chase of radio rating and profits through adverts.

Under Ghanaian law, damaging someone's reputation with false information is a crime that can carry a huge fine which was recently witnessed between a newspaper and a high-ranking official of the ruling government.

Songo's Fire for Fire programme has mainly been modelled on Nyantakyi who has been the subject of discussion on his sports show for the past five years.

The CAF Executive Committee member wants an end to the bad-mouthing and unprofessional conduct of the above-mentioned journalists to end.

Songo was arrested by police in Ghana some months ago for the possession of narcotic drugs before his show.

This lends to the widespread suspicion that his foul-mouthed presentation on the radio show is drug-fueled which others suspect that he has been financially influenced by detractors of Nyantakyi to embark on the bad-mouthing campaign.

This is the first of three targeted lawsuits by the GFA president against some media outfits and some radio presenters who have made their careers out of making outrageous false claims against him.