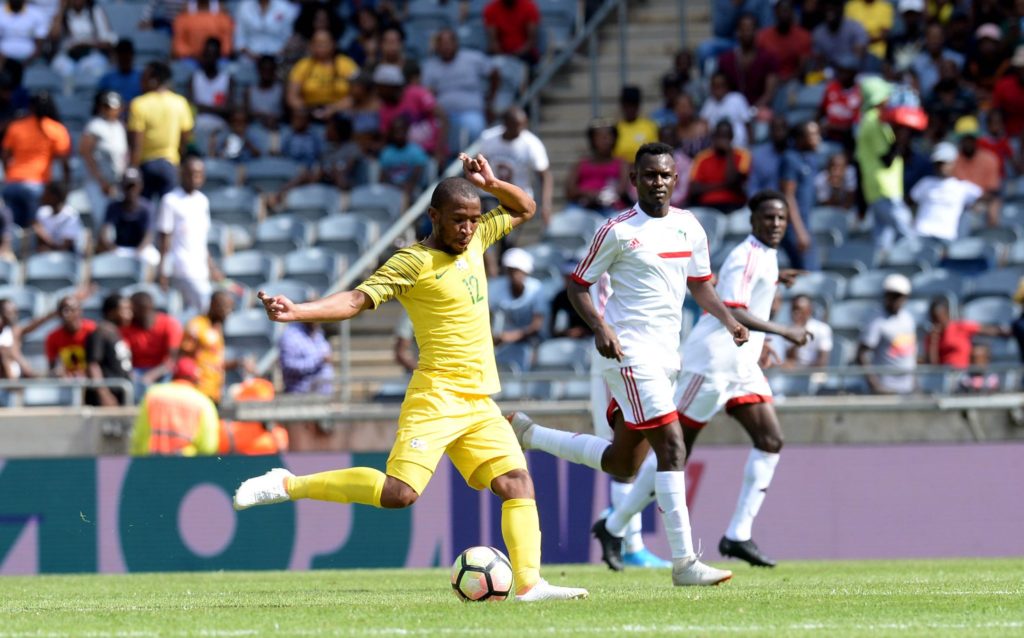 Lebogang Phiri took advantage of the absence of Keagan Dolly and Themba Zwane to fire South Africa to their first win the 2021 Africa Cup of Nations qualifiers after defeating Sudan 1-0 on Sunday.

The France based midfielder has been unfortunate in earning the handful of caps he has and to miss out of the Afcon in Egypt.

His talent and quality are undoubted, but the players who play ahead of him have more international experience which has counted against Phiri.

On Sunday, he showed that he wasn’t a bad shout, skilfully bamboozling his way past Sudan’s defence to help Bafana kick start their Afcon campaign.

The victory puts South Africa on three points with Sudan and Ghana in Group C with the latter playing Sao Tome on Monday.

Bafana coach Molefi Ntseki started with an attack-minded team as the side looked to bounce back from their loss to Ghana in Cape Coast on Thursday, by going on to pick up their first maximum points in these qualifiers.

Lebo Mothiba led the attack, supported by Percy Tau, Thulani Serero and Phiri. Ntseki’s men should have gotten an early lead after clever play from Phiri to set up Kamohelo Mokotjo.

The England-based midfielder fluffed the opportunity and the ball fell on Thapelo Morena who missed a sitter.

Mothiba missed an even more glorious chance as Bafana failed to make the most of their early dominance. The hosts were all over Sudan who parked the bus and looked to catch South Africa on the counter.

Bafana were patient in their build-up, looking to penetrate Sudan with their slick interplay but the bus refused to budge.

Phiri moved the bus with a thunderbolt that pierced the roof of the net. A huge sigh of relief enveloped this stadium as Bafana went to the break a goal ahead.

That relief was fuelled by the wasteful nature of the side in front of goals. At halftime there should have been daylight between Bafana and the visitors who started the qualifiers with a 4-0 thumping of Sao Tome and Principe.

If all three teams – Ghana, Sudan and Bafana – are to get maximum points from the Islanders, then the clashes between South Africa and Sudan could decide who becomes the second team to book a ticket to Cameroon from Group C.

The Black Stars, who are four-time African champions, are favourites to top the group. This makes it essential for Bafana to not only beat Sudan but do so with a healthy goal difference.

Yesterday was an opportunity to improve the team’s goal difference by putting an avalanche of goals past the visitors, but Bafana were not ruthless enough to put their opponents to the sword.