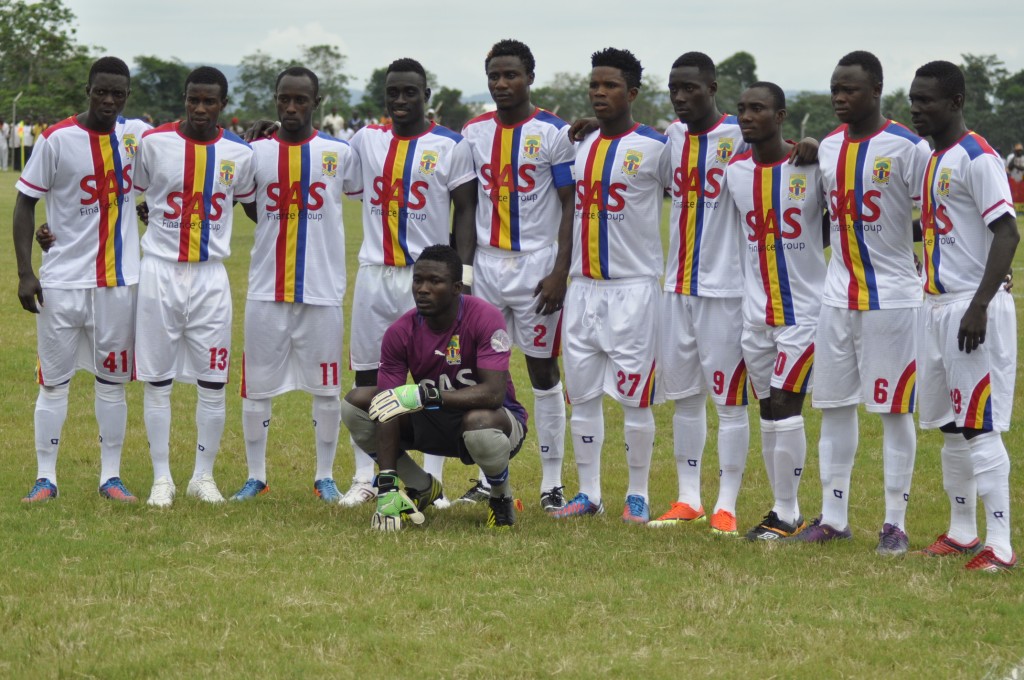 The 54th Ghana Premier League kicked off this weekend as both Asante Kotoko and Hearts of Oak made their intentions clear in the opening watches dismissing Aduana Stars and New Edubiase respectively.

There were outstanding performers and GHANAsoccernet's SADDICK ADAMS puts them together as the ''Team of the Week.''

With time running out, King Faisal keeper Ibrahim could have been forgiven for thinking he had been the sole reason for putting Faisal in with a chance of sharing the spoils. That was, of course, before Chelsea defender Ahmed Adams produced the sort of magic that was long needed after his powerful free kick deflected off a Faisal man in the 89th minute. Chelsea striker Nana Bonsu should have had a hatful of goals and, if it were not for Iddrisu, he could have. His parrying of Basit's free kick in the 76th minute and fearlessly grabbing the ball off the feet of the marauding Obed Owusu minutes before the first half were all commendable. Unfortunate to be on the losing side.

The Togolese import could be one of the best on the local scene if he continues to impress as he did on his debut.

For this lad to come into this match having not played in the Ghanaian top flight before and to make Medeama FC striker Kabiru Moro's contribution practically negligible in Sunday's goalless draw is a testimony to the player and his manager. His runs and abundance footwork were all that delighted fans at the Essipong Stadium in the absence of goals.

I have always lambasted the unpredictable, and often reckless Sefah for his poor performances especially during his days at Medeama . Well, credit where credit is due - against Lions, he kept his composure and discipline, and his team got the deserved point in the Lions Den. Even with one man down, the Miners defence was solid rock throughout the game. Whipped in some decent crosses with his left foot on some occasion when he attacked.

An outstanding performance by the 6ft central defender for the former Champions. Everyone was talking about the last-minute goal by Ahmed Adams but it was Akakpo's tackle that stopped King Faisal's impressive striker Sule Mohammed from shooting the Blues down in the 78th minute. Making use of his physique, the agile defender made sure he kept the guest attackers well under check. The two blocks he produced to deny Tetteh Nortey and Wilson Andoh from scoring in the 54th and 67th minutes were enough to make your eyes water.

Replacing a calibre of Black Stars defender Rashid Sumaila was always going to be a difficult task, so it was hardly surprising that Kotoko coach Mas-Ud Didi Dramani went for a player who was relatively unknown. Ainooson is not your type of a rugged central defender, his stature not the bull size you would wish for in that position but he defends so well that, throughout the 90 minutes against Aduana FC in Sunyani, the former Edubiase man won almost all tackles he went in without committing a single foul. He looked like he's been playing for Kotoko all his life. That was legendary. Excellent acquisition by the Porcupines.

This talent was adjudged as the most promising player in the MTN FA cup last two seasons. He lived up the hype and won the MVP of that same tournament last season and now, I think Gordon needs to be watched very well. The youngster mesmerized the home side Â with his dazzling runs and impressive skills. It is a shame that game failed to produce a goal.

When this lad is on form, like in the win over Aduana, he is a delight to watch. In the real start of his second spell with his boyhood club, the 'River Jordan' was awesome. What a goal! He was a menace all afternoon against Aduana, who failed to come to terms with the Ferynoord Academy product's infectious appetite for the game. It needed a special finish to beat Stephen Adams for the Kotoko equaliser and that's what it was from 25 yards.

He practically tore Aduana apart all on his own and if Kotoko can defend their title for the third time, plenty will depend on this lad. Good business they did by bringing him back home.

Coach Duncan has said he will do most of his talking on the pitch this season and I candidly believe he must shut up all season because when you have a chap like Hayford in your team, you need not to talk. His first goal was without doubt, the most exquisite of finishes but the killer pass was provided by Romeo Agban. His second from a free kick was so technically brilliant that Hearts assistant Ben Adjei was full of praise for the debutant.Â  I've seen Jacob Nettey, Shamo Quaye and Stephen Appiah turn Hearts of Oak into something special during their time at the club. Hayford could, in the near future, if not soon transform the PhobiansÂ  into something similar. A touch of class.

He controls and marshals the field with supreme authority. That is why they call him 'Gaddafi'. The diminutive midfielder who has been rewarded with the captains armband for his series of exceptional displays last season, took off. Combined so well with Jordan Opoku that not trying to sound disrespectful, the other Kotoko midfielders looked inferior in the match against Aduana.

Not so exceptional, not so flamboyant and not one of the established premier league stars you know but this lad's name will forever be on the lips of many. Apparently for the sheer brilliance of taking his first opportunity, and scoring the first goal of the 2013/2014 league season. Liberty Professionals are known for putting faith and confidence in young chaps and I believe Tamimu will follow his predecessors who all excelled.

When Dwarfs placed fourth in the league last season, many like myself never believed. Now, we've all got to rewrite our notes. At Kotoko, Atto Aggrey never got the opportunity even though he showed signs of some brilliance. For want of regular football, the ambitious attacker moved to Kumasi Cornerstones and it paid off. Dwarfs have made a good bargain. Under normal circumstances I would have gone for Fred Boateng who scored Dwarfs'second against Inter Allies but Aggrey's touch and control to bring down a superb ball over his shoulder and net the opener was a master class.

Coach of the Week- David Duncan (Hearts of Oak)