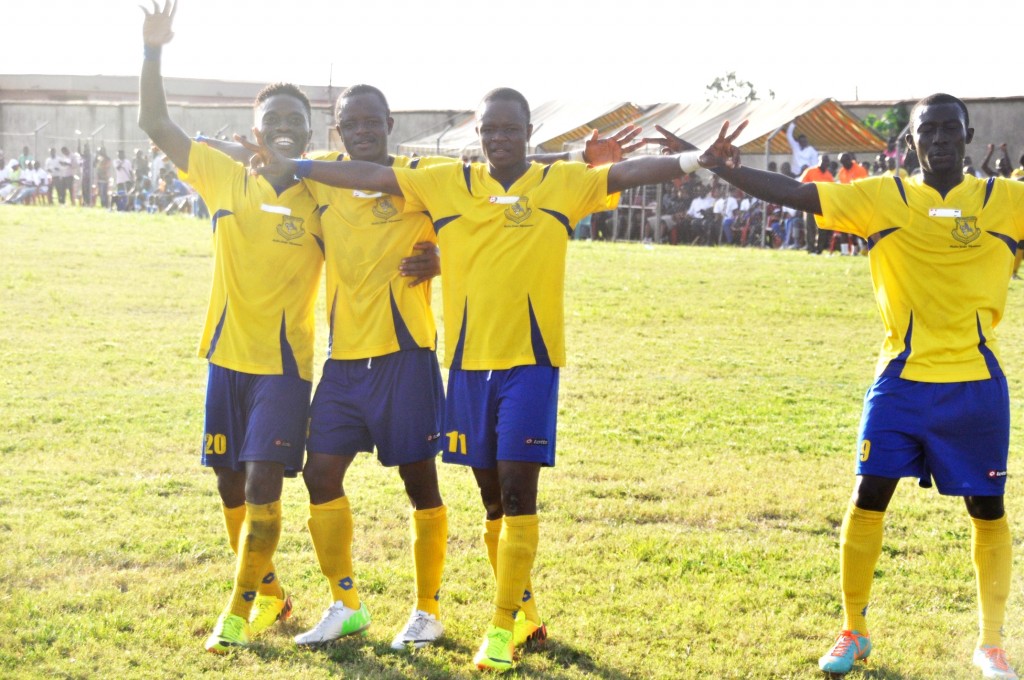 AshantiGold's unbeaten run were brought to a halt at the Gyemfi park in Bekwai by a highly spirited Edubiase side who now move up on the log.

King Faisal fought to secure a draw with Hearts of Oak in Accra while Hearts Of Lions piled the pressure on Inter Allies by coming from behind to beat the bottom club at the Tema Park.

Asante Kotoko regained their composure against Liberty at the Baba YaraÂ  after their defeat against Lions last weekend to remain at the top spot.

GOALKEEPER- IBRAHIM IDDRISU (KING FAISAL): I was tempted to select Edubiase's Ben Mensah after his penalty save from AshGold's Joseph Ato Bissah but having seen Iddrisu Ibrahim's streak of heroic saves against Hearts of Oak in the 1-1 draw, I had little choice but to select the former Ashgold goalie in my Team of the Week.

It could have been four or five against Faisal had it not been for their goalkeeper. Especially in the second half, Hearts of Oak were playing as though the season had already finished and it was obviously going to be a difficult afternoon for the Kumasi boys and so it proved.

First and foremost, I did not see a 3-1 win for Hasaacas against Chelsea coming, nor the Richard Adjei goal.

Adjei is another talented youngster that Yusif Basigri has crafted and brought off the Hasaacas conveyor belt. His performance in the 3-1 win with Hasmal at The Essipong was solid and effective.

The former Tarkwa United defender may not be a household name but, if he keeps playing like this that might change.

Wa All Stars have been in decent form at home of late so for Bechem United to go to Wa and keep a clean sheet takes some doing.

One man who must take some of the credit for that is Bechem skipper Papa Yaw. Not only did he deal with the threat from Samuel Boateng and Siddiq Adamu, but the way he led the backline so high throughout the game was impressive.

DEFENDER- RANSFORD KWAKYE (KING FAISAL)-It was tough picking between Pius Baffour and Kwakye for this position.

For the second time this season Ransford Kwakye makes my team of the week and for precisely the same reasons as the first occasion.

He was instrumental in King Faisal's 1-1 draw with Hearts of Oak in Accra.

The complete display of commitment and zealousness put on display by Ransford Kwakye and the entire Faisal team was unrivalled.

Both goals came in in the first half but in the other half, Kwakye drove the Faisal bus unto the pitch and just parked.

At Dormaa, not many travelling defenders get the guts to cross the half way line into the opposition-but this lad broke the norm to score the winner for his side.

Former referee and now assistant coach of Amidaus tells me there can only be a handful of defenders who are just as comfortable on their right side as they are on the left and Joshua Quansah is one of them. Against Aduana he played on the left and seemed to stroll through the game.

MIDFIELDER- ROMEO AGBAN (HEARTS)- This lad has a lot of talent and he is very capable of scoring goals like the over-head kick he got against Faisal in the game Hearts of Oak were so determined to win. I believe he's been struggling to score many goals as is expected particularly because his striking partner isnâ€™t helping matters and the earlier Duncan realises this, the better.

MIDFIELDER- ASIEDU ATOBRAH (EDUBIASE)-When at the start of the season Edubiase warded off a bid from Kotoko for Atobrah with Abdul Salam Yakubu demanding GHÂ¢100,000 for the playmaker, I was shocked. I thought he was joking. But after following this lad closely this season, I've realised the Edubiase CEO is a bad negotiator. Atobrah is worth more. He combined beautifully with Fuseini Nuhu for their first goal, but I can't remember when I last saw defenders Lawrence Lartey and Nafiu Awudu look so square and flat-footed for Edubiase's second goal.

This lad has promised a lot and struggled to deliver at times but I can confidently sayÂ  that at Lions, Ayew Yeboah is starting to pick up the pieces.

This was a terrifically well-fought contest and it took a well-crafted goal by Sam Ayew Yeboah to unpick a dogged Inter Allies defence determined to keep a clean sheet.

There can be no doubt that the goal was produced by a player with enormous talent.

There have been a number of reasons why Lions are currently fourth in the Premier League and Ayew is one of them.

He scored a goal and provided one assist which epitomised his vision, skill and all-round determination.

MIDFIELDER- TETTEH NORTEY (KING FAISAL)- The King Faisal skipper I guess had only one mentality going into this game. To go back and frustrate his former employers. Exactly what he did.

Coach Roberto Carlos has used Nortey in several positions already this season in many tactical variations and he has excelled so well. Here is a player who, in my opinion, is still to fulfil his true potential, but the move to Faisal is definitely a one in the right direction.

FORWARD- YAHAYA MOHAMMED (KOTOKO)-Yahaya didnâ€™t score so for me to pick him over Dwarfs striker Frederick Boateng says a lot about the performance of the so-called born-again striker.

The giant of a player destroyed Liberty defenders Alfred Nelson and Tuffour Frimpong who are normally the enforcers.

He was the only Kotoko player that really shone on the day, and in so doing run up and down the field and always keeping the Liberty back four in constant frights.

FORWARD- KABIRU MORO (MEDEAMA)-My match of the day reporter in Cape Coast tells me Kabiru Moro has always been a threat to Dwarfs anytime he visits the Robert Mensah stadium.

In fact he has scored on every occasion he visits the Coast and Dwarfs new this occasion couldnâ€™t be an exception.

The bulky striker raced down the goal area to powerfully head Kwame Boaheneâ€™s cross for the opener which ultimately secured the points for the Mauve and Yellow.