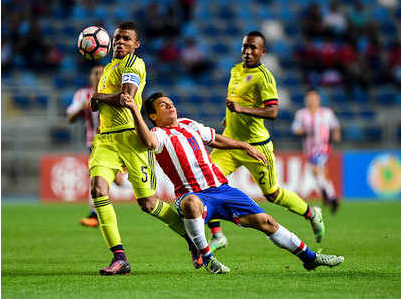 NEW DELHI: While the under-17 boys from Colombia were winding up their final day of preparations ahead of their first World Cup match, against Ghana in the Capital on Friday evening, back home football fans were on tenterhooks ahead of the senior team's World Cup qualifier against Paraguay. That match has been deemed a 'virtual final' even as the actual tournament remains a good eight months away.

No doubt, Colombia's boys too will have one eye on that game, but there are more pressing matters at hand - the nation hasn't had a representation at the Under-17 World Cup since 2009, when they finished third in Nigeria, and it is important to put up a good performance., adding: “(But) it is also a World Cup for me too. At the moment, it makes no difference to me how they perform. We are happy to be here. There is some pressure because the home team is also playing.” Their rivals Ghana too have co me here to resurrect their track record. A nation that ruled youth football in the 1990s, winning the trophy twice and reaching four out of five finals, has struggled to qualify lately, having made it only twice in the last decade.Both teams have trademark styles to flaunt. Ghana's attacking game will be up against the sheer skill of their rivals. At the end of the day, these kids are still some distance away from attaining the peak of their football powers, and Colombian coach Restrepo Orlando put it aptly. “Every team has its strategy. But here, we focus on improving the quality of each player,” he said.