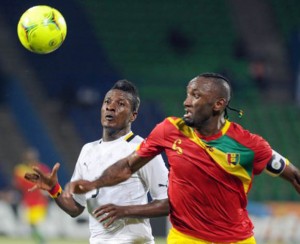 Guinea coach Michel Dussuyer has lashed out at South African referee Daniel Bennett for 'helping' Ghana advance to the quarterfinals of the Africa Cup of Nations at their expense Wednesday in Franceville.Â

Ghana drew 1-1 with the Syli National to finish top of Group D, while the Guineans crashed out of the tournament after Mali defeated Botswana 2-1 in the other game in the group in Libreville.

â€œGhana are a great team, but they did need the help of the referee to go through,â€ blasted Dussuyer after the match.

â€œI am disappointed and angry.

â€œIn the first half all the fouls were against Guinea when we all know that this is a very physical game.â€

Mamadou Bah was sent off in the 69th minute for a second booking as Guinea were reduced to 10 men.

â€œThe first yellow card against Bah was not deserved,â€ insisted the French coach.

Experienced referee Bennett was slow in taking decisions and turned a blind eye to several late tackles as both teams made a combat of this clash in the last half hour.

The Guinea coachâ€™s other regret was the 1-0 loss they suffered against West African rivals Mali in their opening group game.

â€œWe did not deserve to lose to Mali. We were a bit unlucky in that game. It was a big regret therefore to lose that game,â€ he said.

Watch goals of the match below: