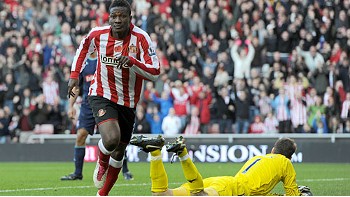 Ghana pair Asamoah Gyan and Andre 'Dede' Ayew are among the five candidates for the 2010 BBC African Footballer of the Year award. They will come up against Cameroonian Samuel Eto'o, and Yaya Toure and Didier Drogba of Ivory Coast are included on the list.

The winner will be decided by African football fans, who have until 10 December to vote for their choice.

Voting for the award will take place via text and online.

The winner will be announced a week later on 17 December on the BBC's African sports programme Fast Track.

Both Sunderland striker Gyan and Marseille midfielder Ayew starred for Ghana as they reached the quarter-finals of the World Cup for the first time.

Gyan has the brightest chances among the two Ghanaians to clinch the award given his performances at the African Cup of Nations, World Cup, the French top flight and his latest heroics in the English Premier League.

Gyan scored three of the four goals that took Ghana to the final of the Africa Cup of Nations in Angola in January.

His three goals steered the Black Stars to the quarter final of the World Cup in June and his heroics in the English Premier League has put him in pole position to fight Eto'o and Drogba.

The 29-year-old forward Eto'o played a vital role as his Italian side Inter Milan won the Champions League and a domestic double.

English Premier League side Chelsea secured the a league and cup double for the first time in their history, thanks in part to the goals of 32-year-old striker Drogba.

While, Toure, 27, became the highest-paid footballer in English football following the midfielder's move from Barcelona to Manchester City.

The shortlist was determined by a panel of experts across Africa who took into consideration individual skill, technical ability, teamwork, consistency, impact on results and fair play.

"It has been a significant year for African football, with the World Cup being hosted in the continent for the first time and Angola hosting the Africa Cup of Nations," said BBC Fast Track presenter Farayi Mungazi.

"A youthful Ghana side lit up the World Cup so it is great to see the Black Stars duo of Asamoah Gyan and Dede Ayew receive their first nominations as well as the ever classy Eto'o, Drogba and Yaya Toure."

Last year's winner was Drogba of Chelsea and Ivory Coast after his consistent form and goals for club and country.

Previous winners of BBC African Footballer of the Year award: