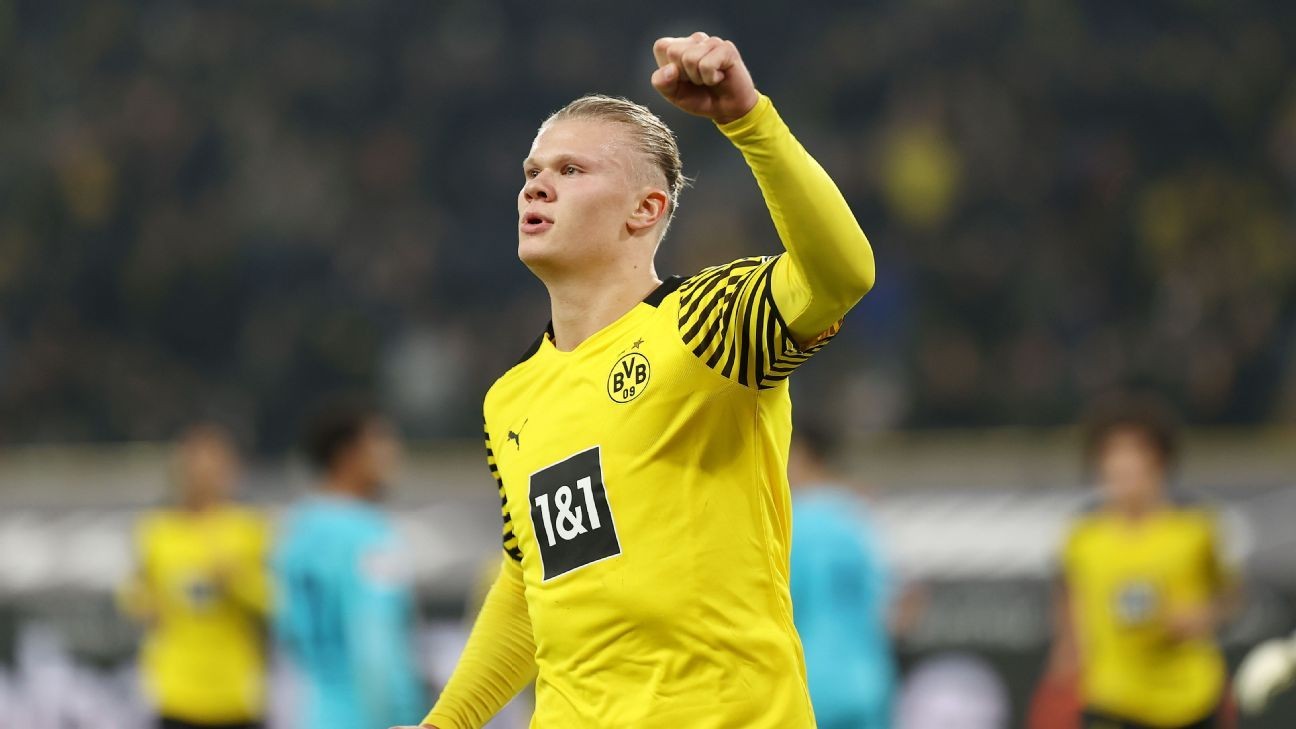 Manchester City are hopeful of beating Real Madrid to the signing of Erling Haaland this summer -- ESPN's Insider Notebook has the latest.

Manchester City are optimistic they can see off competition from Real Madrid to sign striker Erling Haaland this summer, sources have told ESPN.

City are in the market for a striker and are confident they can put together a financial package to cover the €75 million release clause in Haaland's contract with Borussia Dortmund (which comes into effect this year), the Norwegian's wages and other associated fees including payments to agents.

Sources said that the departures of Angelino, Ferran Torres and Jack Harrison (for combined fees of around €85m) have left City in a strong financial position ahead of the summer window.

- Stream LIVE games and replays on ESPN+ (U.S. only)
- Five strikers who could replace Haaland at Dortmund

They also believe the lure of working with Pep Guardiola and a track record of success which has seen the club win three of the last four Premier League titles can convince Haaland to spend the next stage of his career at the Etihad Stadium.

Haaland also has a personal connection to City after his father, Alfie, represented the club between 2000 and 2003.

Manchester City are hopeful that Erling Haaland will follow in his father's footsteps and play for the club. Photo by Dean Mouhtaropoulos/Getty Images

The possible inclusion of a release clause in any contract he signs with City -- which would activate at a later date -- is considered a hurdle but not one that cannot be overcome.

Sources have told ESPN that Madrid remain interested in the 21-year-old but that signing Paris Saint-Germain striker Kylian Mbappe on a free transfer this summer is their priority.

Madrid are waiting for the outcome of the Haaland soap opera before they define their transfer strategy for the upcoming transfer window. They remain optimistic about the arrival of Mbappe as a free agent and, according to sources, also want to strengthen central midfield with a player who can give Casemiro competition, with AS Monaco's Aurelien Tchouameni on the shortlist.

However, Haaland's decision will have a decisive effect on the rest of Madrid plans because the club are aware that they will not have the same money for additional players if they finally end up signing the Norwegian.

Sources added that Madrid are pessimistic about their chances of signing Haaland because they believe City are the frontrunners. -- Rob Dawson & Rodrigo Faez

Luis Enrique's contract with the Royal Spanish Football Federation (RFEF) ends after the 2022 World Cup in Qatar. The ex-Barca manager has said he has no desire to leave the post before then, but sources said that he is on the list of candidates to take over Manchester United next season.

The RFEF have made it a priority to renew Luis Enrique's existing contract but are already considering alternatives in case he leaves his role after Qatar.

Luis Enrique has dodged questions in the past few days when asked if he would extend his deal with the Spanish FA once the World Cup is over.

"I will be with Spain at the World Cup and what happens after, we shall see," he said. "I will certainly be in Qatar. There's no position that I want more than to represent the national team."

In the past, the Spanish FA has opted to renew the contract of a national team coach before the start of a major tournament to show confidence in the project. however, Luis Enrique has said he prefers to wait and see Spain's performance at the World Cup before deciding on his future.

The former Spain international took the reins for the first time in 2018 but stepped down due to personal reasons in June 2019, with Robert Moreno taking his place, but RFEF president Luis Rubiales again turned to Luis Enrique after Moreno's brief spell at the helm. He then agreed to reduce his wages by 25% to help the FA's finances after the impact caused by the COVID-19 pandemic.

The personal rapport between Rubiales and Luis Enrique remains good, but the FA are already looking at alternatives if he decides to return to coaching at club level after the World Cup.

Marcelino is the preferred option as he has a similar style of play to Luis Enrique. Marcelino's contract with Athletic expires at the end of the season, while his future is up in the air with the Basque club holding presidential elections in June.

Valverde is also another option for the FA since he has been without a job after being dismissed by Barcelona in January 2020.

Another coach that is also on the list of potential candidates is Quique Sanchez Flores, who has performed well at Getafe since replacing Michel in October. -- Rodrigo Faez

RB Leipzig are set for contract talks with star midfielder Christopher Nkunku this summer in the hope of keeping him at the club, but will listen to offers in excess of €75m, sources have told ESPN.

Nkunku signed for Leipzig from Paris Saint-Germain in 2019 but has enjoyed a breakthrough campaign this season, contributing 15 goals and 11 assists in 27 Bundesliga games.

According to sources, Nkunku's form has attracted the attention of Europe's top teams with Manchester United, Liverpool, PSG, Real Madrid, Manchester City and Arsenal all monitoring his situation. Bayern Munich are also interested in him but will struggle to meet the asking price of €75m.

The midfielder is under contract until 2024 at Leipzig and the club are hopeful of persuading him to stay for an extra season. Sources have told ESPN that the club are hoping their good relationship with his agent Pini Zahavi will also help their cause, but there is an acceptance that if a team offers €75m, it will be tough to keep him.

Sources add Nkunku is hopeful the club will accept a bid in the region of €60m.

While Nkunku could leavethis summer, Josko Gvardiol is set to stay. The highly rated 20-year-old defender has enjoyed a remarkable season in the Bundesliga, following his €16m move from Dinamo Zagreb last summer.

The Croatia international can play at centre-back and left-back but is set to reject any overtures this summer to continue his development at Leipzig, sources said. -- Tom Hamilton

Pereira's move to Flamengo at risk of falling throughAndreas Pereira has enjoyed an impressive loan spell at Flamengo this season. Getty Images

Brazilian club Flamengo are running the risk of missing out on a permanent deal for Manchester United midfielder Andreas Pereira with negotiations still not yet finalised, sources have told ESPN.

Flamengo have agreed a fee of around £10m, including a clause for a percentage of any future move for the 26-year-old midfielder, who has also accepted a lower salary than he is on at Old Trafford.

But with Flamengo not yet in a position to complete the deal because of uncertainty around their finances, clubs from Spain, the Netherlands and England are circling.

Flamengo remain at the front of the queue for Pereira but his performances on loan in Brazil -- scoring five goals in 24 games last season -- and his willingness to accept a pay cut to secure a permanent move away from Old Trafford has alerted a number of European clubs.

Sources have told ESPN that PSV Eindhoven, where Pereira played between 2005 and 2011, are among the clubs to have registered an interest. The Brazil international is also keen on a move to Spain; his wife's homeland.

Pereira has a contract at United until 2023 but will be allowed to leave if a suitable offer is made. -- Rob Dawson