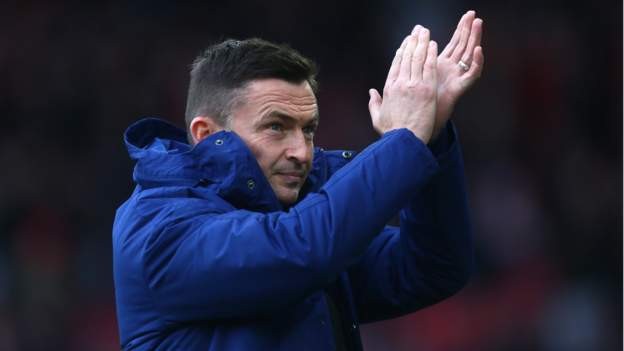 Paul Heckingbottom's tenure as Sheffield United boss got off to a winning start with a 2-0 victory over Bristol City at a snowy Bramall Lane.

Rhian Brewster's low drilled shot from 15 yards out gave the hosts the lead just before half-time.

Veteran substitute Billy Sharp then got the Blades their second with two minutes of normal time remaining with a strike from close range, to secure the win.

Sheffield United have now won back-to-back games in the league for only the second time this season and move up four places to 13th in the Championship, with Bristol City three points and five places behind.

There was a lengthy stoppage in the second half as Robins centre-back Nathan Baker was stretchered off in a neck brace after a head injury, which resulted in 13 minutes of added time.

The former Aston Villa defender had only recently returned to the Bristol City side after suffering a concussion in their defeat at West Brom last month.

Sheffield United came into the match off the back of a turbulent week that saw manager Slavisa Jokanovic sacked after just six months in charge, following an underwhelming start to the season.

Heckingbottom, who was in caretaker charge of the Blades when they were relegated from the Premier League last season, was instantly installed and handed a four-and-a-half year deal on the same day.

The week also saw midfielder John Fleck hospitalised after he collapsed during Tuesday's win over Reading. The Scotland international was discharged from hospital on Wednesday and in attendance at Bramall Lane for the match.

The Blades started brightest and caused Bristol City all kinds of problems, Wolves loanee Morgan Gibbs-White sending a low cross across the face of goal that Brewster could not quite get on the end of.

Brewster then twice saw shots go wide, while Jayden Bogle could not quite get his header on target after David McGoldrick made a break down the left wing.

The Robins were restricted and saw three players booked for time-wasting within the first 40 minutes. But they still created arguably the best chance of the first 45 minutes when Alex Scott's corner picked out Chris Martin in the box, forcing a save from Wes Foderingham.

It was not long after the snow began to fall that Brewster broke the deadlock with his second goal in three games, getting on the end of an Enda Stevens pass to find the bottom corner.

Yet the hosts continued to have the majority of possession and chances. Gibbs-White sent a shot straight at Bristol City keeper Dan Bentley, John Egan sent a header wide and Sharp forced Bentley into another save.

City, limited to just two shots on target, had a golden opportunity to level the score when Antoine Semenyo played in Nahki Wells - who was unable to find the unmarked Weimann who was in acres of space - before Callum O'Dowda watched his cross ricochet off Basham and almost bounce in for an own goal.

Sharp, 35, then found Sheffield United a deserved second with 89 minutes on the clock as McGoldrick sent a cross flying into the box, which he slotted home for his sixth goal of the season.

Attempt missed. Nahki Wells (Bristol City) left footed shot from the centre of the box is close, but misses to the right. Assisted by Tomas Kalas with a cross.

Ben Davies (Sheffield United) is shown the yellow card for a bad foul.

Nahki Wells (Bristol City) wins a free kick in the attacking half.

Jayden Bogle (Sheffield United) wins a free kick in the defensive half.

Attempt missed. Chris Martin (Bristol City) right footed shot from the left side of the six yard box is close, but misses to the left. Assisted by Alex Scott with a cross following a corner.

Attempt missed. Morgan Gibbs-White (Sheffield United) right footed shot from the right side of the box misses to the left. Assisted by David McGoldrick.

Han-Noah Massengo (Bristol City) wins a free kick in the defensive half.