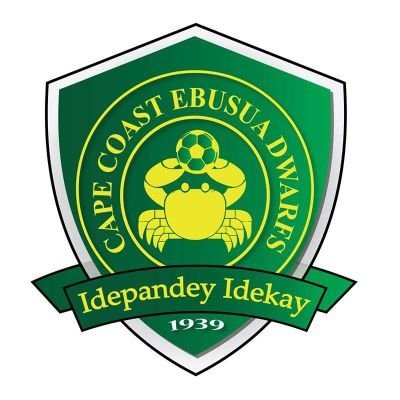 Cape Coast Mysterious Ebusua Dwarfs is a Ghanaian professional football club based in Cape Coast. It is currently a member of the Ghana Premier League, and hold home games at Cape Coast Sports Stadium.

Founded in 1932, Ebusua Dwarfs were one of the founding members of the Ghana Premier League and won the 1966 Ghana Premier League. They also were one of the eight teams invited to play in the first-ever Ghana FA Cup, losing 6–0 in the semifinals to Hearts of Oak after defeating their rivals Vipers 2–0. Dwarfs defeated Ho Mighty Eagles 4–2 to win the 1968 FA Cup final.

Cape Coast Dwarfs appeared in the 2000 CAF Cup, losing to Ismaily of Egypt 6-0 in the quarterfinals but not before defeating Wydad Casablanca.

Famous Black Stars goalkeeper Robert Mensah got his start with the Dwarfs in the 1960s.

Nana Aidoo, the Dwarfs CEO and chief financier, died in 2018.

The club was ordered to be liquidated by the high court in July 2019 after failing to pay a 20-year-old transfer fee over Patrick Villars to Great Liverpool FC. The club appealed the ruling.

The Registrar-General’s Department ordered the Ghana Football Association to dismiss Ebusua Dwarfs from participating in the 2020/21 Ghana Premier League over the case with Great Liverpool FC.

The long legal battle concluded in January 2019 when the court approved a motion to liquidate Dwarfs in order to settle the debt.

In January 2020, the official liquidator wrote to the GFA to request for them to annul Dwarfs’ status as a Premier League Club but with Dwarfs actively participating in the truncated 2019/2020 league season, no action was taken.

The GFA was served with another letter to expel Dwarfs from the Ghana Premier League or face contempt of court.

On November 13, 2020, the Crabs were granted permission to partake in the 2020/21 league after they settled the case amicably with Great Liverpool just in time for the commencement of the season.