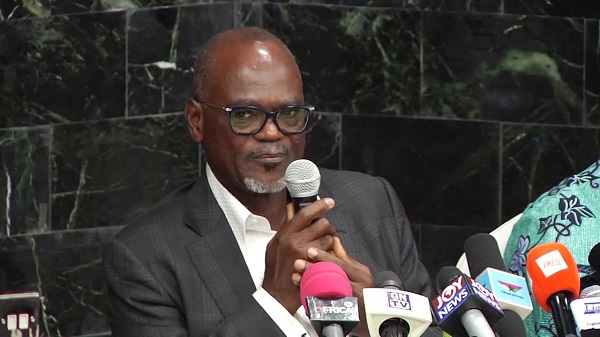 Ghanaians cherish their football as the old cliché bandied around seems to make everyone believe, just like the talk about their hospitality.

The political class tend to use the best highlights of the game to preach about national cohesion and canvass for votes during elections whilst the filth of the sport is surely the weapon any opposition would be ready to unleash.

A video put out by the social media handlers of the President at the Jubilee House showing H.E. Nana Addo-Dankwa Akufo Addo, excited, as he watched Tottenham Hotspurs – a team we are told he supports – beat Ajax in the semi-final of UEFA Champions League in May this year provided Ghanaians with something to ponder about.

The number one gentleman is a proper football person as he claimed in a end of year meet the press.

Fantastic. He loved the spectacle of that night in Amsterdam. But it’s only natural that as he retreated to focus on other matters of national importance and in his sober moments, he might have wondered what happened to events back home superintended by his “anointed” darling citizen, Kofi Amoah.

Kofi, sorry I left out the title or appellation (Dr). I am only taking a cue from your missive to members of the football fraternity inviting them to their Extra-Ordinary Congress.

The President can be best assured that the reality, the system has created – though not worthy of any mention -, is the emergence of a ‘new breed of morally-upright’ administrators.

How fine these gentlemen are. Very credible and clean, well-mannered and a heart for the growth of the beautiful game taken away by the servants of the past.

What went amiss and why could no right-thinking industry player identify these noble persons with love for the game and country? Ghanaians, indeed have short memory.

The President and Ghanaians are woken by the piper called Kofi Manu (Blue Blue) – another Kofi but with no doctorate conferred on him like that of the chair of the GFA Normalization Committee -, please try and go back to sleep.

What is “Blue Blue”? He’s just loud and rabblerousing. Despite all his commentary on radio, he was also seen in the “Number12” documentary.

This gentleman – “Blue Blue” – has been resisted by the executives of the Ghana League Clubs Association (Ghalca) led by Kudjoe Fianoo on the basis of him being “unclean”.

“Blue Blue” was recently ‘stopped’ from being part of a group of clean and morally upright persons and ‘hijacked’ by Ghalca to review the Statutes presented by GFA’s Normalization Committee.

Such a bold step.

But there is an unresolved issue. How come the Kofi Amoah administration has failed to constitute the GFA Ethics Committee to bring finality to matters involving persons like “Blue Blue”, rather leave it to a so-called directive by the dissolved and ousted Executive Committee informing all shown on screen by the “Number 12” documentary to step aside or even for a court of competent jurisdiction to pronounce him a ‘dead goat’ to society. Such would give us clarity.

There is no written constitution solely for “Blue Blue” that bars him from contributing to national development.

So enter, my noble breed of administrators. The very ‘clean’ persons who are attempting to move the bar to another level.

Ghanaians certainly don’t have short memories. In 1999, some twenty years ago, a Commission of Inquiry into the International Transfer of Players and Related Matters set the tone to eradicate the game from some of its many ills.

It was famously known as the Gbadegbe Probe.

The findings were terribly damning as the government 32-page White Paper released in May 2000 sought to punish and reclaim lost revenue which had found its way into private pockets instead of developing the game through the efforts of Clubs and the Ghana Football Association.

Jones Abu Alhassan, a very knowledgeable football person who is spearheading the Ghalca expert group to review the Statutes must be applauded for his service to Ghana football despite a dark period in the same game.

The former Real Tamale United man was a member of the then Executive Council of the GFA and cited for perjury and deceit over the $300,000.00 transfer of Baba Adamu Armando from Swedru All Blacks to a Club in Dubai.

The report stated: “The Commission found that the testimony they offered was untrue, in which case they had individually committed the offences of Perjury and Deceit of Public Officer.”

It’s very intriguing that this Ghalca, led by Fianoo, have touted a ‘clean’ person like Jones Abu Alhassan to chair the very expert group that they happily removed “Blue Blue” from.

And if the GFA led by Kofi Amoah is attempting to ‘block’ “Blue Blue” from partaking in Congress, then, it should do a very genuine fit and proper test of all who would be attending the September 5 session.

It’s good that Jones has kept faith with the football people and contributed in so many ways despite the dark days.

If Jones is ‘clean’ per the Ghalca and GFA Normalization criteria, why should “Blue Blue”, not indicted by any competent court, walk a free man and enjoy a life of what is good for the Jones’.

And there are those who have and continue to parade the corridors of the GFA and the Sports Ministry in recent times and gleefully ridicule the past era during their dining sessions with the Normalization Committee yet have failed to rid themselves of the forged cheque debacle.

How they wished they had never forged that cheque that has hanged around their necks. Surprisingly, they wear the white cassock to carry the moral fight to others but with the forged cheque in their pockets.

The system of fairness that our society, ably informed by the media, upholds and being applied by Kofi Amoah’s GFA is simply terrifying.

These precedents should not set the stage for crisis but should rather help raise the bar and leave the President and Ghanaians without a lot to ponder in their sober moments.

So, despite football in Ghana, appearing a world away from the business of the game played out in Amsterdam that the President watched on one of the many screens in the Jubilee House, let us not allow political interest to interfere in our local game. We need a free and fair process devoid of political tagging to elect a new GFA President and Executives.

When the business of the game and the input of the State is well harnessed, that is only when our game would be set on a path of proper footing that would see the number one man soon watch a game between Atebubu Espearance and his favourite Asante Kotoko under the lights at the Tsito Arena.

Lest I forget, I intend pursuing my doctorate. I don’t know why Kofi Amoah forgot to add his title the last time. I would not attempt to forget it when I earn it in future. And before I even get admitted into an accredited institution to pursue that, I am considering adding the title (Dr) to my name anytime I pen my missives but it would come with the caveat – YTS (Yet to Start).

Yours I want to know.